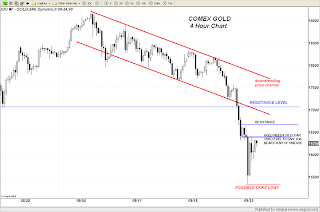 
The other possibility that we will watch for is for another leg back down lower again, only this time on decreasing volume which would indicate a loss of appetite on the part of the bears to sell aggressively at these lower levels.
One does reach a point in these hedge fund driven markets where price overshoots both the upside and to the downside making the risk/reward of a given trade not particularly attractive. In this recent case, how much more downside risk do you think gold has compared to upside risk when price is down below $1550? If we were moving into a rising or higher interest rate environment, that would be one thing but we are going to remain mired in an ultra-low interest rate environment for the foreseeable future; one that I might add is highly conducive to owning gold since opportunity cost is lowered to hold the metal in that sort of environment. Besides, any solution being offered by the West to shore up its tottering economies is going to certainly contain measures designed to increase liquidity (debauch the currency by money creation). In that environment, gold's risk will always be more to the upside than to the downside, again, especially after it has been battered down so severely.
Posted by Trader Dan at 5:43 PM