Gold has shown continued strength going into the Asian session this evening. In the process of so doing, it has reached the upper limits of the pitchfork extensions shown on the chart. I have chosen the monthly upon which to do some analysis so as to get the long term picture and point out several things which merit mentioning.

Notice that the dark green center line has acted as the upper boundary for the entire move since the reaction that occured in the gold price in late 2009, early 2010. All subsequent rallies met this line and held below it until this month when price exploded through the center line alerting that the trend higher in gold was now accelerating.

The three red outer lines and the single blue outer lines are projected levels where we can expect to see some resistance form. Thus far the two red lines nearest to the center have failed to cap the price rise. We are currently trading right on the outer 3rd red line of the upper set which this month passes through the $1925 - $1935 level. Beyond that is a blue line which this month comes in near the $1950 - $1960 level.

What we are attempting to do is to project levels at which we might expect some selling to occur and a potential reaction in price to take place. There is nothing set in stone which states that these levels must produce selling. They are merely given as POTENTIAL areas of selling resistance. Should the market blow through these levels, then we will have to resort to other methods to anticipate some potential inflection points.

For now, traders can monitor price action near these levels and trade accordingly.

Should we actually get a turn lower in price, any subsequent retracement should find buying support at each of the upsloping colored lines on the way down. The dark green center line should hold any retracement if the market is going to continue with a strong and sharp advance. Thus gold could move lower to the tune of $150 - $170  from current levels and still be very strong on the chart. If such an event were to occur, the bulls would like to see the price then hug that same green center line as it forms its low and bounce upward off of that level as the overall trend continues to the upside with a bit less steep of a price advance. 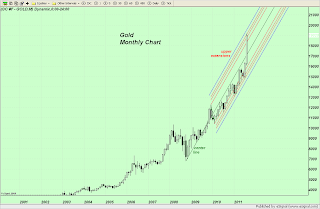 The first is Brent Crude, the global benchmark for crude prices and the second is WTI crude, which is the Nymex benchmark and the one most often quoted by American wire services and news organizations.

The reason for the charts is that which Eric King and I discussed on this past Friday's KWN Weekly Metals Wrap where we talked about the severe undervaluation of the gold mining stocks. The point we were discussing was the direct impact that lower energy costs have on mining operations. The rise in the price of gold with a simultaneous fall in the price of crude oil, is lowering input costs for mining companies at the same time the price they are receiving for their finished product is rising rapidly. That is a surefire recipe for increased profitability moving forward. Given the fact that one of the arguments against buying the miners has been that their input costs have been rising at the same rate that gold has been rising, this effectively kills that argument. 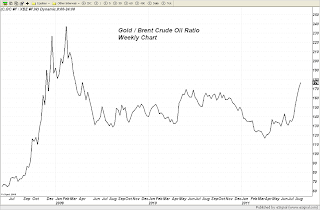 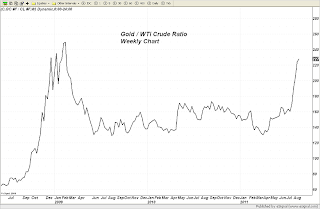 It does seem from the price action of today's session, that some of the market players are finally catching on to this. If even one or two of the major shorts in the gold shares begin covering in size, the resultant buying wave will take prices of many of these shares through technical resistance levels on their price charts, resulting in further short covering as the hedgies which foolishly overstayed their welcome and attempted to squeeze the last 20% out of an otherwise profitable trade, begin to get snared by their own greed.
A closing monthly push through the all time high marked on the chart should see the miners do some rapid catching up to the gold price and reverse the downward trend in the HUI/Gold ratio. 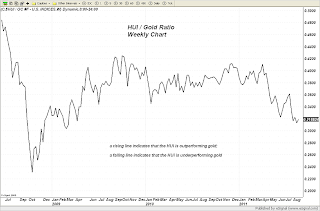