Money Flowing back into Commodities

Note the CCI chart and the nearly vertical lift over the last week. Money is pouring back into RISK ASSETS as the Dollar heads lower and the Fed keeps interest rates so low that money is free. This is the perfect environment for the wild-eyed speculator, especially the hedge fund types, who ADORE LEVERAGE and will shove as much money as they can wrap their fingers around into the commodity sector in anticipation of inflationary price rises. 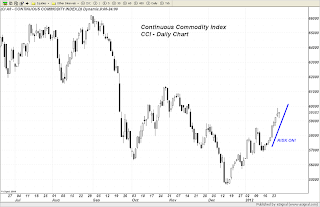 By the way, just take one look at the following chart of unleaded gasoline if you have the stomach for it. Every time you head to the gasoline pump and fill up, you can bow down and pay homage to the Fed for their "gift" of higher fuel prices. After all, who gives a damn about the average consumer and retiree when Wall Street profits are on the line. That, and the current occupant of the White House's re-election chances.... 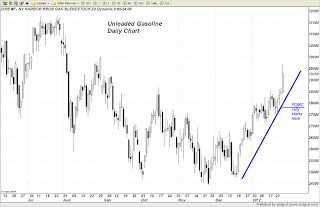 Gold regains half of its losses from the record peak price

Technicians make a big deal out of the 50% Fibonacci retracement level due to the psychological implications of that level in the minds of traders, both bulls and bears. Generally speaking,  those who have been on the wrong side of a trade and who have very deep pockets, will oftentimes allow the market to continuing moving against them while they wait for the inevitable price retracement, either higher or lower depending on which side of the market that they are on.

Once they regain half of their losses, they will oftentimes then finally get out of the losing trade and move to the sidelines to access their next move. That means that a market that has been moving lower after making a peak in price, can very often expect to see some strong selling at this 50% retracement level. Note on the chart that I have indicated in red "Should be a tough fight here" at this particular level which came in near $1725. 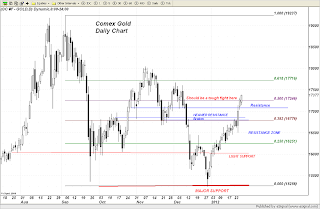 Today gold went through this level and as of the time of this writing has not as of yet shown any indication of wavering on the part of the bulls or any eagerness to cut losses if they have been riding the wave down from $1900. This fact bodes well heading into next week as it sets the gold market up for a potential test of first, $1750, and then $1770.

The fact that the mining shares as evidenced by the HUI are acting so strongly today, is suggestive that those equity guys are reassessing their views of where the gold price is headed and are pricing in a higher level than they originally were thinking.

US Dollar fails at 82

Since the late spring of last year, the US Dollar has been the recipient of a fair amount of "safe haven" flows, mainly in response to the woes afflicting Europe and by consequence, the Euro. We have said repeatedly that the US Dollar rally was not based on any desire to own the Dollar out of bullish economic fundamentals but rather out of fears concerning the viability of the Euro.

What this translates to is that any news or developments that seem to lessen the severity of the European sovereign debt situation, whether through concerted Central Bank action or from any other front, will send money flowing right back out of the Dollar and back into the Euro. Note that the last two weeks, particularly this week after the FOMC just cut the legs out from under the Dollar for as far out as the eye can see ( 2 years), the Dollar has seen very heavy selling which has confirmed the level near 82 as significant chart resistance. The Dollar failed here last week and has not as of yet been able to regain its footing.

When you couple the FOMC statement this week with today's release of the abysmal 1.7% US GDP reading for 2011, is it any wonder that the Dollar is sinking like a lead brick.

If it fails to bounce here near 79, it looks like it has a clear shot back down towards 77. 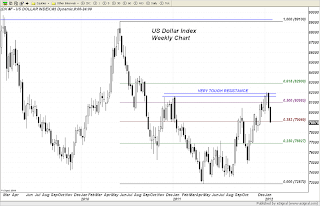 As most gold mining shareholders have been all too painfully aware of by now, the mining shares have been lagging the broader market for the last 6 months or so now. Notice the peak last summer and the progression lower, particularly at the end of last year.

Trying to decipher at what level the analysts have pencilled in the gold price when valuing these things is an exercise in futility seeing that the Fed threw everyone an enormous curve ball this week when they gave the green light to another two years of zero interest rates. Obviously, that is strongly bullish for both gold and silver which are poised to go out on a very strong note this week. 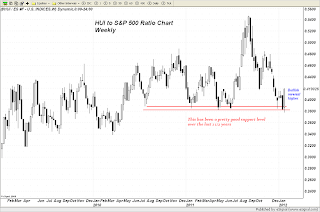 The problem has been the mining shares in general which kept underperforming. After yesterday's lackluster showing, I was cautious about the HUI failing to gain any ground after making its high on the open. Today however, those bulls which seemed so hesitant to push them any higher, are obviously having second thoughts and have stepped in much heavier with the result that they took out the previous day's high and are keeping these miners well bid through the session. Apparently we are seeing a revaluation of the shares now that the FOMC has changed the playground rules.
If this sort of buying continues heading into the close ( and I am closely watching to see whether it does or not - so far it is very strong), the HUI will close at its best level in 6 weeks. It has even managed to turn the short term moving averages (10 day and 20 day) higher while it remains well above the 50 day. That is a nice turnaround from yesterday. The buying has taken the index exactly to the 100 day moving average. That will keep the index on a strongly bullish footing if it succumbs to the bulls. 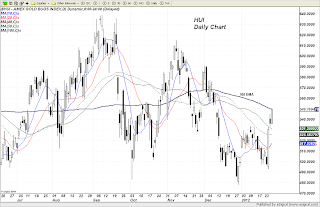 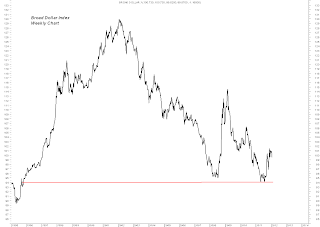 US GDP remains mired in mediocrity

Reports out this morning show that US GDP for 2011 was a pathetic 1.7% compared to 3.0% for 2010. Imagine what it would have been without all that QE! No wonder the FOMC is giving the green light to hedge funds to jam the stock market higher with their stupid zero interest rate policy now extended out for another two years.
Posted by Trader Dan at 9:44 AM No comments:

Take a look at the following chart of gold priced in Euros, or "Euro-Gold" as I prefer to term it. I have mentioned here and on some of my KWN Weekly Metals Wrap that this chart is one that all gold traders must continue to reference if they are to get a proper handle on the technical aspects of this market. The reason for this is that the issue most shaking the gold market during the "risk off" trades was the mess in the sovereign debt situation of many countries in the Euro-Zone.

Fears over that factor were seeing European-based buying of gold as doubts over the integrity of the Euro surfaced and still are haunting the minds of many traders and investors from that region. After all, put yourself in their place - when you see nations such as Greece, Italy, Spain and Portugal (that is today's concern) having to pay record or near record yields on their government issued debt to attract sufficient buying to absorb it; when you see France along with some other nations there downgraded, would you not want to follow prudence and at least move a portion of your Euro-denominated assets into gold for protection? I know I sure would.

Either way, that process has kept Euro gold very well bid, even when we were seeing some decent selling showing up on the Dollar priced gold chart.

As long as this chart stays strong, and it is currently very strong with price threatening to take out the resistance level noted and make a run at the former all time high, any dips in Dollar priced gold are not going to last long. 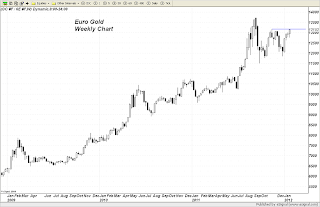