We have said for some time now that Silver will only benefit in a period in which inflation is the main fear and not deflation. That of course implies that the bond and note markets will begin pushing rates HIGHER out of inflation fears.

With this is mind, observe the following chart comparing the price action of Silver to the Yield on the Ten Year Treasury Note. The Silver price is the lighter colored line while the black line is the yield on the ten year. Note how uncannily similar the chart patterns are of the two beginning near the month of October 2010. Why is this? Simple - if interest rates are rising the fears of a slowdown are receding. Silver tends to benefit in such an environment.

Today we were treated to a FOMC statement which hinted at a majority moving towards further action on the bond buying program should economic data warrant such. Perversely for the Fed, any attempt to engage in such a program, which by its nature is designed to PUSH DOWN longer term interest rates, will have the result of sending huge money flows into the commodity sector in general and the precious metals in particular. This will get the attention of the bond vigilantes who will then attempt to sell into the Fed buying driving rates higher instead of lower. After all, whom, besides the Fed, wants to own a bond during a time in which the main fear is inflation??? 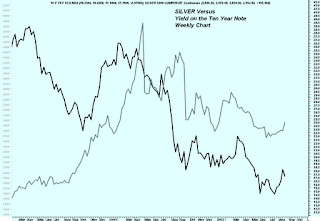 Gold Needs a Strong Close to End this Week

The following weekly chart provides a bit of longer term perspective as it shows the very solid level of buying support that has marked an accumulation phase by some very large players down below the $1585 - $1565 level. That buying has forged a bottom in this market while it slowly gathered steam for an upside breakout that forced the hands of the speculative shorts and enticed momentum based money flows back onto the long side of the market.

There are two main points to bring away from this chart. The first is that gold has managed to clear a downsloping trend line going back to the its all time peak (in non-inflation adjusted terms). It will tremendously aid the bullish cause should this market close above that line and especially above the $1665 level to end this week. 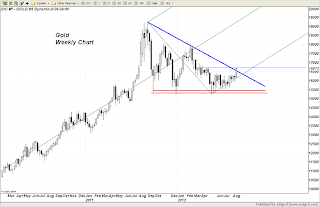 The second is to note how the market has been recently marching higher along the bottom tine of the pitchfork managing to close each week ABOVE this line since its spring low. This series of higher lows is indicative of a market that is seeing DEMAND arise at a progressively higher price level. That in itself is friendly.


If this market can clear psychological round number resistance at $1700, I expect it to make a fairly rapid run to the $1788 - $1800 level. The reason? Because the move will be starting from a relatively low level of speculative players on the long side in this market.

Remember Open interest has bled out of this market to the extent of over 400K contracts since its peak last year in August. That is an astonishing washout in a year's time! Speculators took their money and headed elsewhere looking for gains. If this market looks as if it is going to begin another trending move to the upside, those funds that were leaving in droves, will be returning in droves to try to capture the move higher and capitalize.

Look at the following chart of the OUTRIGHT LONG positions (Not NET LONGS) of the big managed money/hedge fund community in gold. Since peaking close to 260K contracts near the all time high in gold last year, it has dropped over 50% to the present time. As stated many times over the past few months - the hedge fund community lost interest in gold as it was not trending. They went elsewhere looking for opportunities and found them to a great extent in the grains. 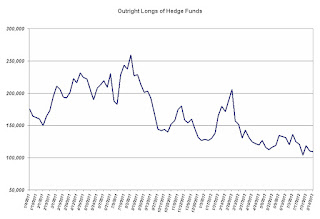 However, this camp LOVES trending markets with lots of momentum, which is why gold will move sharply higher if the algorithms remain solidly on the buy side. That will see the following chart detail a rather abrupt turn higher with the line rising instead of falling. So much of course depends on the actions of the Central Banks but the markets seem to be more and more convinced that the next "PROBLEM" it is going to have to deal with is becoming one of inflation and rising prices rather than deflation and falling prices, thanks mainly to the accomodative monetary policies that many are now expecting to be forthcoming from all corners of the globe.

Gold put in a very strong showing in today's session the instant the FOMC press release hit the market. All that was necessary was the fact that a few words were changed from "some" to "many" and to "fairly soon". Once traders saw those words, it was off to the races and no looking back.

Traders interpretted this change of wording as evidence that the committee was now largely leaning to a new round of bond buying should future economic data releases confirm the slowdown in growth.

We have noted for some time that Silver would underperform gold during a time in which deflationary or slowing global growth fears are dominant. The exact converse is true when traders begin shifting towards inflationary expectations. Silver leads and then gold follows.

Two days ago silver broke out of its recent congestion pattern as it surged through the $28 level. Gold moved higher that day also pushing through the top of its congestion pattern also as the surge in the grains, combined with higher crude oil, gasoline and heating oil prices had traders concerned that the heretofore rather benign inflationary environment was about to change and change in a big way.


Note on the chart below that gold is now firmly out of the "newest congestion zone" which had been bounded by roughly the $1630 level on the top and is working back into a former congestion zone which top is in a broader range between $1700-$1680. 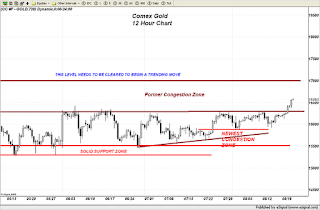 Short covering by that segment of the hedge fund community which had been playing gold from the short side kicked into high gear once $1630 was taken out and continued today immediately upon the release of the FOMC statement. Fresh buying also came in as momentum based funds now have both metals on their radar screens.

We should now see dip buying surface on any retreats in price as the algorithms are now in the buy mode. Only a drop back below $1610-$1600 would derail this nascent move higher.

Dow Jones is reporting this morning that PIMCO's Commodity Real Return Strategy Fund, with about $20 billion in assets, has raised its gold holdings to 11.5% of it total assets from 10.5% two months ago. The position was apparently taken when gold dipped towards $1500 according to comments from Nic Johnson, its co-portfolio manager.

Their concern is a triple one - loose monetary policy, high levels of sovereign debt and rising commodity prices are going to fuel an inflation outbreak as we move ahead.

Here is the point - the chart in gold showed tremendously strong support in gold on any retreats in price down below the $1600 level a short while back. Gold would dip down into these levels but would immediatey attract strong buying and would rebound back higher. WE remarked that this sort of chart action showed ACCUMULATION by deep-pocketed players, whether those were of Asian origin or large investment funds elsewhere. REgardless, these well capitalized players are positioning themselves for what they see coming down the road.

Note, that this is not MOMENTUM BASED buying. That crowd only enters the markets AFTER it starts moving higher and takes out technical resistance levels. They are now coming into gold and into silver. ACCUMULATION puts a floor in a market; momentum based buying drives it higher into a trend.

We'll need to keep a close eye on the yield on the Ten Year Note to see how that acts as we move forward. If the inflation play is replacing the deflation play, we have seen the lows in interest rates for a very long time.