Concerning China and the Gold ETF

Eric King's sources are generally reliable and it would make sense for a buyer of large size to attempt to source their gold from one place. It all comes down to availability.
One thing about the report however is that it serves to reinforce the idea that Chinese demand for the metal is very strong. Keep in mind that China is a huge producer of gold and yet at that, apparently that supply is insufficient to keep up with their own internal demand. That speaks volumes.
I have long advocated that the way to end the gold price suppression scheme would be for the longs to stand and take delivery at the Comex and force these sellers of paper gold to come up with the actual metal. One of the problems going this route is that there are delivery month position limits at the Comex which work to prevent a large buyer from coming there and using a large number of futures contracts to secure the metal. y large I mean someone who might be buying in the size that has been buying in the recent past.
It could be done but the potential buyer would have to repeat the process every month, month after month, using the maximum number of contracts going into the delivery period and just moving from month to month. Obviously for some entity to secure a large amount of gold at one shot it would make things very difficult if not impossible. (See how the exchanges work to protect the shorts).
If the story is true, there are no such restrictions that I am aware of on getting gold out of the ETF although I admit I have not read through its prospetus in some time.
This is also the reason that buyers of gold in large size love to see officially sanctioned sales of gold by Central anks or by the IMF. It provides them the opportunity to acquire large amounts of the metal at one price and at one time and very quietly I might add so as not to alert the broader market as to what they are up to until after the fact.
The Chinese undoubtedly are well aware of the games begin played in the gold market by the western monetary authorities and quite ly it is in their interests to let them keep right on sitting on the price until they (the Chinese) can acquire all the gold they wish at a discounted price.
They can read the tea leaves and see the importance of having sufficient gold reserves as the global economy begins to look at serious alternatives to the current system based on the US Dollar as the sole reserve currency. The old adage: "He who owns the gold makes the rules" is certainly appropos.
Posted by Trader Dan at 12:47 PM 16 comments:

Back to business as usual in the Bond market

Once again the bond market "miraculously" was resuscitated after breaking down technically in Friday's session. It is evident that the monetary authorities are extremely concerned about its picture on the technical price charts and are fearful of the move lower attracting momentum based selling from the speculative community. That is at complete odds with their plans to bring down rates on the longer end of the yield curve. So out come the usual culprits to bid them back up even as the equity markets continue their rocket ride higher.

In spite of the move higher today, which as you can see on the accompanying price chart has been on mediocre volume indicating the lack of conviction and skepticism among partcipants, traders are going to be looking to sell rallies in this market unless price moves back to well within the previous 7 week long trading pattern. Even at that, they will then look to sell up towards the previous ceiling near the 122 level.

The bond market appears to be living on borrowed time with the only buyer of any size being the Fed through its primary dealers. There is a tremendous amount of supply coming to the market this week and it will be interesting to watch the Fed's balance sheet continue to grow as they are forced to step up to fill any lackluster demand.

That being said, the key to watch this week will be Wednesday's auction of 10 years where the Treasury will be peddling $24 billion. The next day, Thursday, $16 billion in 30 years go up for sale. 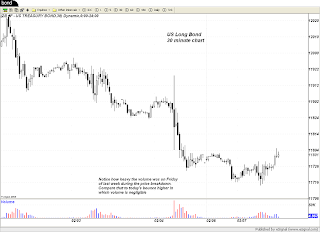 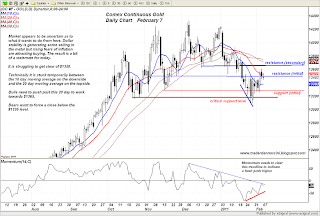