I am focusing in on the weekly chart to provide a bit of a longer term perspective as today's action (Tuesday) has put the HUI in very dangerous technical territory from which it must recover before the week is out in order to prevent a deeper sell off.

I have drawn in TWO support lines on the chart which have proven to be of significance to this index. The upper line comes in near the 520 level and the lower line near the 500 level.

When the HUI broke down below the first line in today's session, it immediately fell down to the next line or lower support level before bouncing. This lower line is now critical. 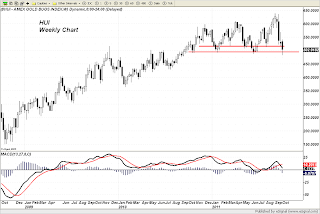 The HUI has had only ONE WEEKLY CLOSE below the 500 level the entirety of this year. That was back in June when it closed out the week at 496. The following week saw it close back above the 500 level which in hindsight proved to be the confirmation that a bottom was in for the sector. Perhaps that was a precurser of what we can expect this time around. Let's hope so.

You will note on the chart that over the course of this current year, there have been several other weeks during which the HUI had pushed down below the 500 level but by the end of the week, it had recaptured it.
We will need to see the index close the week above this lower line to prevent a deeper setback in the sector as a whole.
Note that the WEEKLY MACD is now in a bearish mode meaning that most likely rallies are going to be sold unless we see this indicator reverse to the upside.
The bulls have their backs to the wall and are going to need to stand their ground and dig in if they are going to be able to thwart this lastest effort at leaning on the shares. I would breathe a sigh of relief if the index can close OUT THE WEEK ABOVE the 520 level.

One final thing - the HUI/Gold ratio collapsed today taking it down to a new low for the year. It is now at levels last seen way back in March 2009 when gold was trading nearer to 930 - 940. Astonishing!  Wait until some of these gold mining outfits release their quarterly numbers. I find it hard to believe that there is not going to be some very large profits being generated in this industry. 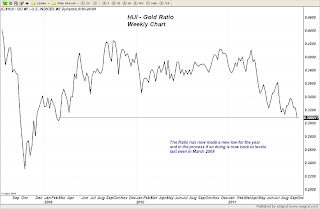