US Dollar running into some selling

The US Dollar has been able to keep its footing above the 50 day moving average on its daily price chart which is technically bullish but it does seem to be running into plenty of willing sellers between 76.50 - 76.00.
While the Daily chart is much improved its weekly chart still shows it in a definite downtrend. 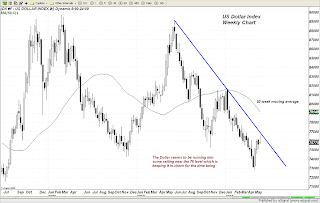 If the Dollar is going to extend its rally from current levels, it is going to need to take out 76.50 for starters and hold that level going into the close of the trading week. 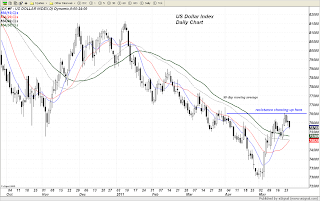 While gold has been pretty much ignoring what the Dollar has been doing of late, the Dollar still is exerting an influence on the overall commodity sector. Its recent weakness of the past three trading sessions, which I believe is tied to dovish talk coming out of the Fed, has enabled the fund money flows to come back into the commodity sector in general. This has pushed the CCI back above the 640 level, a level which I believe is indicative of the appetite of the hedge fund community for risk. Above 640, they love risk; below 640, they hate risk. Wax on; Wax off. 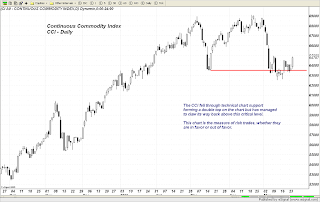 If the Dollar does rally through 76.50, it is doubtful that the CCI will be able to hold above the 640 level. If the Dollar falls further down towards the 50 day moving average near 75.25, the CCI will continue to push higher.
Since silver is perhaps the strongest recipient of the risk trade, the weaker the Dollar, the more likely we will see silver back up near $40.
What is happening right now is that the same weakness in economic data releases from the US showing an economy that is in danger of stalling, data which had initially worked to throw the risk trades off the table, now seems to be working in the opposite with traders/investors viewing the dovish comments from certain Fed officials as a sign that the Fed is not going to change an accomodative monetary policy. In other words, interest rates will stay at extremely low levels for at least another 12 months. Some are thinking a step further will be some form of stimulus coming from the Fed as well.
If this thinking is for real and begins to take hold, the Fed will be extremely hesitant to cross the market since the reaction would be a huge sell off in equities and a smashing of the commodity markets by hedge funds running out of risk trades. That would instill fears of deflation once again, somethign which the Bernanke-led Fed will not permit.
For now, the commodity complex is signaling that the market has baked into the cake the end of QE2 but not the end of low interest rates with some expecting further stimulus. The more the expectation of additional Fed stimulus grows, the weaker the Dollar will become and the stronger gold will be.
We will have to watch the Dollar's price action to get some sort of clue to what the consensus of the investor community is in this regards.
Posted by Trader Dan at 9:21 PM 9 comments:

Investors looking to the Fed for stimulus again?

It is perhaps a bit premature to jump to conclusions but today's price action in the overall commodity sector seems to be signaling that a subtle shift is occuring in the minds of some investors in regards to the Fed and the upcoming end to QE2 at the end of next month.

Fed governor Bullard might have been the one who got the ball rolling by his comments from yesterday when he stated that there would more than likely be no monetary tightening until later next year. That put a firm bid under many commodity markets and kicked some of them strongly higher yesterday. It also seemed to pull the Dollar down somewhat from its best levels of the session even while it was supported by an aversion to the Euro based on the woes in Euroland.

Today we are seeing a sharp rise in the CCI (Continuous Commodity Index) which has taken it up past that key 640 level that I am closely monitoring. We are also seeing the Dollar unable to push higher. With money flows coming back into the commodity sector, it comes as no surprise that those markets which led the sector lower are now leading the sector higher. That is why silver is so strong this morning. Also, crude oil is trading closer to $101.

What might be happening is that investors are looking at the ugly chart pattern forming on the S&P and seeing this recent near-collapse in commodity prices and putting two and two together. What I mean by that is they are thinking that while the come-down in commodity prices, notably energy and some foods has been welcome, no one wants to see a collapse of the magnitude of 2008. It was not that long ago when I posted a comment here at my site and wondered whether a deflationary mindset was creeping back in. That word, "deflation", sends dread and fear running down the backs of Chairman Bernanke. Bernanke will not let such a mindset get firmly established.

With fears of a slowdown in growth for the emerging markets, and a concerns that recent US economic data has been weak, traders are beginning to suspect that the doves at the Fed are going to have their way and that some sort of stimulus is going to be forthcoming from the Fed. Keep in mind that the Fed views as part of its mandate, growth in employment. With this sort of data coming out and with the thinking in connected circles that the sharp fall in commodity prices has taken the wind out of the inflation genie for the short term, the Fed now has room to come up with some sort of stimulus, whether that be another round of QE or something else.

Again, one day does not a trend make but I do find it noteworthy to see the extent of the money flows coming back into the commodity sector today. That would not be occuring unless traders believed that the Fed was going to shift gears and perhaps become more accomodative. It could be that the consensus is that the Fed overshot it to the upside the first time around, then overshot it to the downside by sounding too hawkish of late and now may be trying to find a happy medium.

Either way, for today at least, watching copper moving up nearly 2.5%, enough traders think that something friendly is coming down the pike and is paving the way for "risk trades" to return.
Posted by Trader Dan at 9:28 AM 5 comments: