Gold is still running into selling above the $1500 level. If the bottom of the recent range is to stay intact, it will need to encounter good buying above $1480. If that were to fail, it will drift down towards $1460 where I would expect it to find some good support as sovereign debt issues in the Eurozone combined with US fiscal and economic woes should bring in value based safe haven buying. 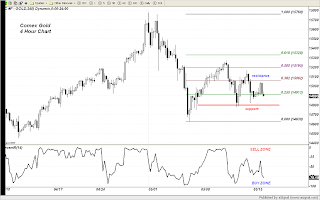 Silver Fails to hold at $34

Silver has been finding good quality buying every time is has dipped below $34 over the last couple of weeks. This afternoon it crashed through $34 but this time it has not popped higher almost immediately. That has me concerned that it is headed down to retest the recent low near $32.50 on the downside. If that fails to offer support, chances are very good that we will see it test $30.

I am not sure whether it is the tail wagging the dog or the dog wagging the tail. By that I mean to say I am not sure whether the continued selling in gasoline and crude oil is weighing on silver or whether silver is helping to weigh on the crude and gasoline markets. I think it is actually the former right now as losses across the energy complex are creating a terrible drag on most of the commodity markets right now.

For silver to stabilize, we need to see the equity markets stabilize. So far, that is not happening. They looked as if they were going to do just that earlier in the session today but then the sellers came out of the woodwork and unloaded on equities and that was that. The S&P 500 looks like it has solidly broken down based off of today's price action as it took out last week's low and the previous week's low in the process. There is some support near the 1300 level in there which will need to hold or it is going to be a long summer for Bernanke and company, not to mention the current Administration. They had one thing going for them with all this QE created liquidity - while the job market was in the crapper, at least those who had 401K's and IRA's with stocks were feeling pretty good about those. If that support vanishes with a fading equity market, then what?

That is why this talk about ending QE2 at the end of June is worth second guessing. If the stock market implodes, and the labor markets fail to respond positively, do you really believe that the Fed is going to be able to resist the calls for more liquidity? That will surely give the doves on the FOMC the added advantage of being able to say, "we told you so".

Do not forget that the last time the QE1 program was ready to expire, the US equity markets began rolling over and that rollover, combined with the lousy job market, was enough to send officials into a tizzy. Out rolled QE2.

This time, now that Bernanke and company have managed to completely derail the commodity sector rally by their quasi, non-tightening, tightening talk, causing a virtual collapse in gasoline prices and many food prices. They can now state that they have "room" to push another liquidity program especially with the Dollar moving up from the 73 level on the USDX. Bernanke also has the added credibility of seeing his comments about energy and food prices being temporary and modest as a result of this recent debacle in the commodity markets. While they wanted energy prices down, they DO NOT WANT a return to a deflationary mindset in the investing world so this will be something that they will be keenly watching. Remember, the purpose of the Fed is to get the hedge funds to do their bidding for them. When prices were deflating, they were signalling, nay, begging, for the hedge funds to start buying up everything on the planet that was not nailed down. Once their slaves did their bidding, then they were irritated that they went too far and began pushing prices to the point where the public started complaining about high gasoline prices and the politicians began taking heat from their constituencies. That had to be rectified. But like disobedient slaves, more often than not the mindless hedge funds cannot be counted on to understand their master's true desires so if they start selling too much and actually begin loading up on the short side of too many markets, particularly the equity markets, then the master will be displeased.

Time will tell but I find it hard to believe that if the US equity markets continue reacting to an expected ending of QE2 at the end of next month, the way they have been acting the last two weeks, that Ben and company are not going to be forced to give them another bowl of punch. 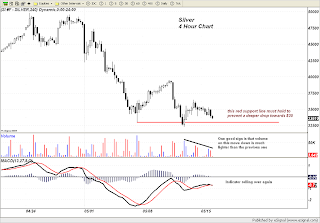