I have made no secret of the fact that I am most concerned about a wave of credit/debt issues coming to China sooner rather than later. As a matter of fact, Dr. Copper has been accurately forecasting this for longer than many of the so-called expert analysts.

While I view this development as a deflationary force globally, which should pressure certain key commodity markets, it also seems to be one of the factors bringing some safe haven buying into the gold market at the current time.

My own view is that if there were another deflationary wave that might threaten to engulf the world economy again, gold would struggle in such an environment. This view is based off of what happened to the metal during the outbreak of the credit crisis here in the US in the summer of 2008.

However, back then the Dollar was the recipient of strong safe haven flows. Thus far we are not seeing that and that is why gold continues to remain resilient in the face of these deflationary news. For now, gold is benefitting from nervous equity investors seeking a safe haven from unsettling winds that are buffeting the global economy.

Here is the headline from the article I suggest you read:

I have not commented on this for a long time but every week I do monitor the Federal Reserve's Custodial Accounts to try to get a sense of the amount of US Treasury obligations sitting "in the vault" in New York, held there for other foreign Central Banks.

I have been trying to get a sense of why we are seeing this general US Dollar weakness and have been at a loss to explain, especially of late during this geopolitical crisis over in Ukraine.

Take a look at the following chart of US Treasury Holdings by these Foreign Central Banks that are on deposit there in the Custodial account at the Fed.

Look at the steep plunge that has occurred since the beginning of this year. We have gone from a peak of near $3.021 Trillion to a current $2.855 Trillion. That is a drop of some $166 billion since the high point reached in the middle of December last year. Folks, that ain't exactly chump change. 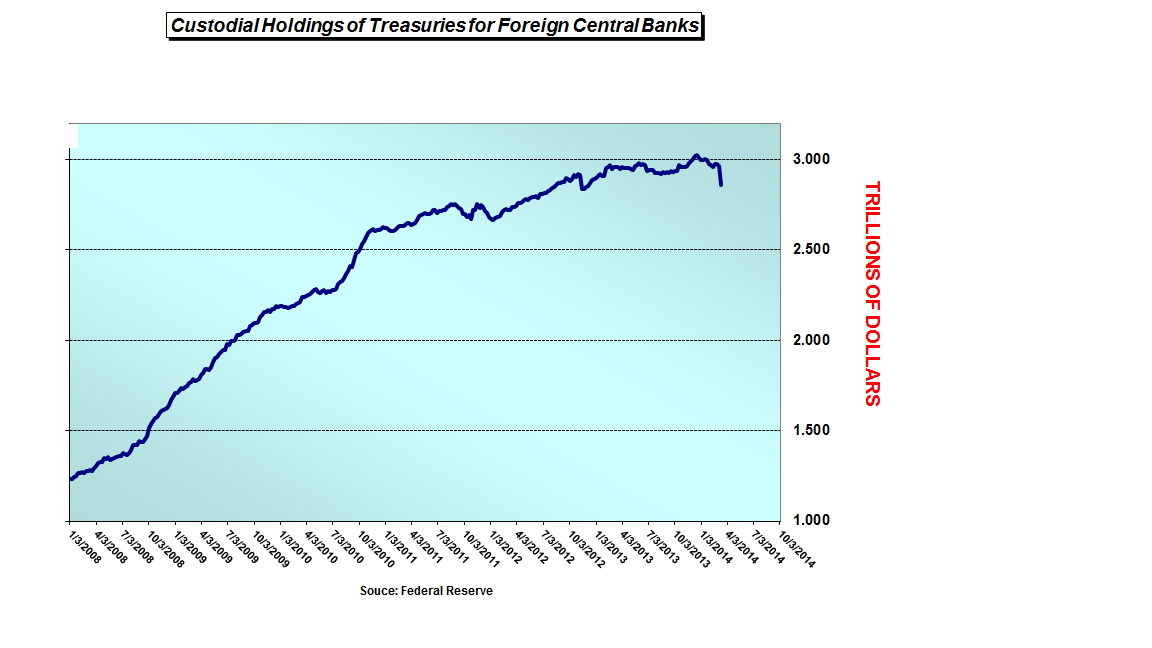 Why this is occurring is unclear to me at this point but I feel it will be worthwhile to monitor this. As you can see on the same chart, we have seen episodes during which Foreign Central Banks tended to be fairly large sellers of Treasuries only to then have them return as big buyers. Much of course depends on their Balance of Trade with the US and how they sterilize their surpluses.

The steepness of the plunge is the largest I have yet observed on this chart in terms of the amount involved. In percentage terms, the reduction is approximately 5.5%.

I know that there are some that would be more than happy to jump on the bandwagon and attribute this to the outbreak of tensions surrounding the Ukranian crisis and all the chatter ( baseless in my view ) that Russia, even China and some throw in India, are threatening to dump US Treasuries as a way of waging a sort of financial warfare with the US should the West proceed with sanctions against Russia. However, this trend has been going on since the second week of December of last year, long before things flared up over there. Something else seems to be in play here, although I am unclear what that might be.

If global trade is slowing down, as some fear it will ( myself being among them), I can understand falling Dollar amounts being involved and thus a shrinking need for Treasury purchases for sterilization reasons. That would manifest itself, in my view, as a slower rate of purchases but not necessarily a dropping of the Dollar amount of Treasuries held in custody.

If that is the case AND if some of these Treasuries are maturing, and are not being rolled over in the new purchases, that would explain the shrinking number. It does make me wonder if that recent China data showing shrinking exports from that all-important nation, is indeed having an impact on these Custodial Accounts. This might be SOME of the reason behind the recent Dollar weakness.

Making this more interesting is the fact, that over that same period, from December 19,2013 (when the number of  Foreign Central Bank held Treasuries peaked) the Fed has purchased $98.6 Billion Treasuries as part of its ongoing QE program. While not the whole amount, it is still a fairly large number of Treasuries ( about 60% of the total reduction noted above).

The USDX closed at 80.75 on the week containing December 16,2013. Today it closed at 79.62. A little more than a full point but it does seem to me that some of this weakness in the greenback can be attributed to some of that reduction in those Treasury Custodial holdings.

As always, the more we learn of the doings across the global economy and the current financial system, the more factors we have to try to account for in attempting to understand the "why" behind changing money flow patterns.

Do you not find it odd to say the least, that the US Dollar has not been able to garner any support in the form of safe haven buying related to the deteriorating crisis over in Ukraine? For how many years have we seen the greenback as the "Go-To" currency during times of financial or geopolitical crises.

Remember 2008? How about the European Sovereign Debt Crisis? How about that rush INTO the Dollar when the idea of a Fed tapering first began to surface.

What happened to all of that?

It sure makes me wonder if part of the issue is tied to the Obama administration's handling of its foreign policy issues. 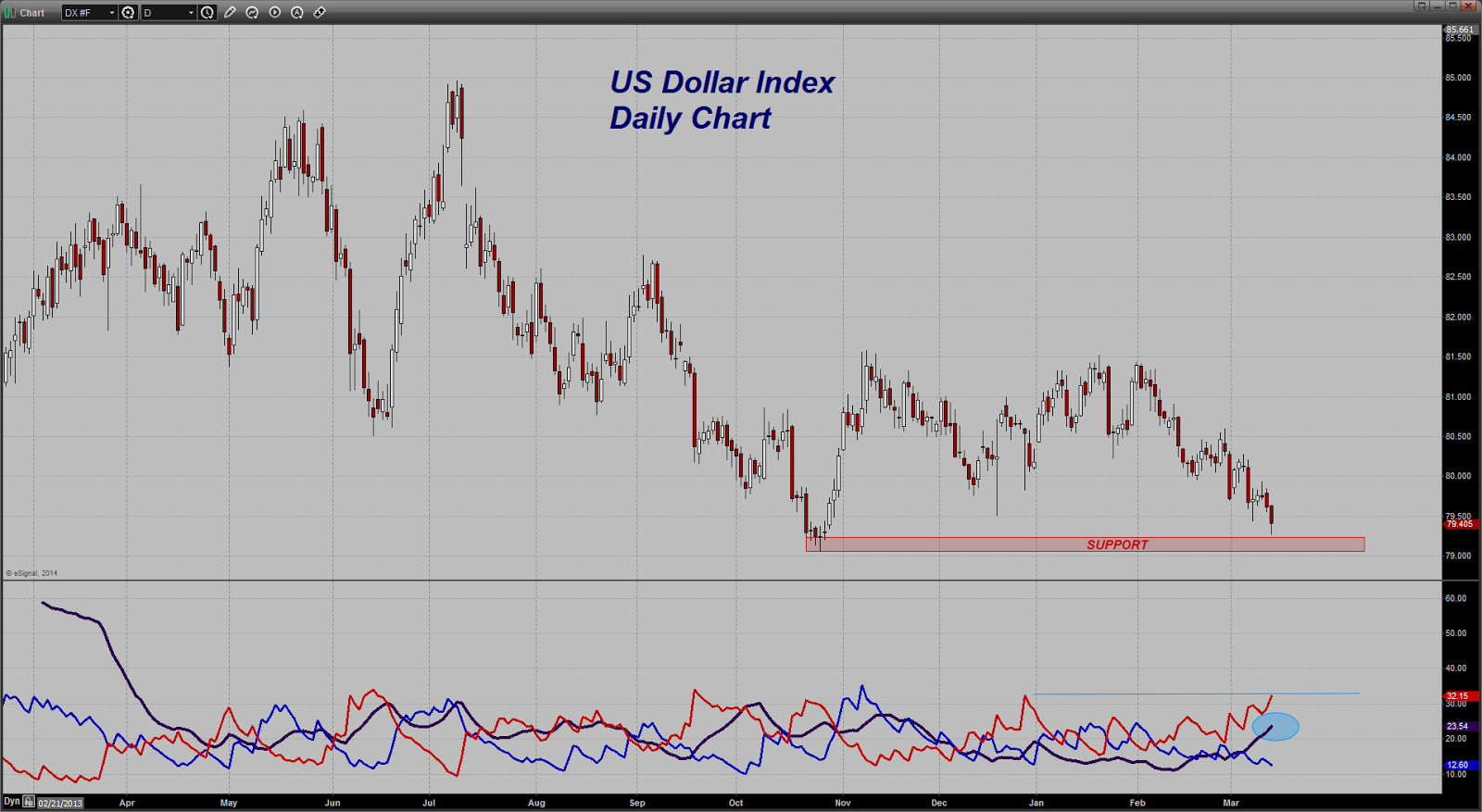 One thing for sure is occurring however - Treasuries are getting a firm bid out of safe haven plays. That is dropping interest rates and appears to be undercutting the Dollar although one does wonder how a rush into Dollar-denominated Treasuries is not Dollar supportive. There are so many new and different developments in these markets anymore that attempting to understand them all is proving to be an exercise in futility.

What I do know however is that this persistent Dollar weakness, is providing a strong floor of support in the gold market.

In the past, when we did get a general round of Dollar selling, almost as if in inverse lockstep, the commodity sector would march higher as the weakness in the currency would trigger a big macro trade across the sector.

This is not occurring. Copper continues to sink lower and lower and while crude oil is managing a bit of a bounce today, the products are both weak. Individual commodity markets are powering higher ( Coffee, Hogs, Cotton) but the broad-based buying in the sector is lacking. You can see this in the relatively weak performance of silver compared to gold. Silver is following copper today and acting like an industrial metal rather than a monetary metal ( you never know what you are going to get with schizophrenic silver from day to day).

I am very closely monitoring this Dollar chart however. The market is poised right above an important chart support zone near the 79 level basis USDX. If that goes, I expect to see gold reach the psychological $1400 mark.

The ADX is now rising along with the Negative Directional Movement Indicator ( RED LINE) showing the bears are currently in control of the market and a trending move is looking more likely. Again, that will require the support zone to give way but unless the bulls make a firm stand here, they are going to cede complete control of the market to the bear camp.

The HUI looks like it woke up from its slumber of yesterday. It has finally managed to clear 250 which is a real positive. I need to see this index power above 280 for starters to conclude that a stronger bullish uptrend is developing. Still, one has to be happy for the long suffering mining sector bulls who have been mercilessly pummeled for so long. At least their portfolio balances are finally moving higher.

We'll have to see what develops further over in Ukraine but for now, it has certainly spooked equity bulls and that is sending money flows into both gold and Treasuries for the time being.

This Dollar weakness is troubling, very troubling...
Posted by Trader Dan at 9:33 AM 27 comments: