Stocks have embarked on a relief rally ever since it appeared that the Fed was going to keep interest rates at an ultra low level and the ECB was going to step in and buy up Spanish and Italian Debt. While such actions tend to keep investor fears subdued it does nothing to actually genarate true economic growth. That requires structural reform which includes looking at the tax code, cutting excessive and burdensome regulation, andgetting the central governments to actually exercise some spending restraint.

Traders are of the opinion that the Central Banks will intervene to prevent any worsening of the factors that have precipitated the move away from risk but at the same time, they all realize that serious problems are still lurking in the background and have not really been dealth with.

I am not sure what trigger might set off another round of broad based equity selling but if the market were to move back down towards the recent low near 1075 and fail to hold there, it will drop at least another 100 points before any technical support will surface based solely on the price projection given by the pennant formation.

Equity bulls really need to get the index above the 1250 level to spook the bears and preferably above the falling 50 day moving average at 1275. That seems a tall order given the state of the US economy. Perhaps the best that they are hoping for is to settle for a draw with the bears and bounce the market back and forth in a wide range trade giving the economy time to improve on its own. Then again they might be crossing their fingers waiting for Uncle Ben to give them some sweet whisperings about another dose of QE when he gives his speech at Jackson Hole near the end of this month.

Given the political firestorm that would set off, I doubt we are going to get anything quite that drastic at this point. We would need to see an equity market debacle to given them the courage to do any such thing as that would basically be the last nail in the coffin of the US Dollar. The Fed has been roundly and rightly criticized for the effect that its two previous doses of QE had on the greenback and the subsequent spike in gasoline and food prices which negated any stimulative impact that the easy liquidity might have had, if any. The ability of gold to push past $1780 set the stage for its test of the $1,800 level. The two lines of technical resistance are noted on the price chart. As you can see, the initial approach to $1780 saw gold encounter some resistance from sellers trying to defend that level. After they were unsuccessful, they then retreated towards the $1800 level from which they are attemping to absorb the bids coming into the Comex gold pit.

Technically, the gold market is now at a crossroads of sort for the short term price action. Volume has been shrinking as it nears $1800 which is not particularly a good sign for the bulls as it reflects hesitancy on their part to get too aggressive at this point. They will need to stand firm here to prevent the bears from getting emboldened.

If the bulls can push price past $1800 and hold it above that level, they have a very real chance at moving back to the all time high. If they falter, then gold will sink back towards $1780 where the bulls will need to step up to prevent it from dropping back to the $1740 level.

The bears are attempting to create a short term double top on the price chart by digging in and holding price near current chart levels; however, to actually validate such a formation, the price would have to be taken down below $1730 and held there.

The big problem for the bears however is that they are running "out of season" for the seasonal chart pattern. Gold tends to strengthen as it moves into the latter part of the third quarter and into the early 4th quarter as the Asian festival season begins, not to mention the Western Christmas season. The sort of physical demand associated with this time of the year then becomes a headache for the shorts in the market, particularly if the conditions which are bringing safe haven flows into the metal continue to worsen.

The bears are going to be hoping and praying for a strong equity markets rally and a lessening of the "fear factors" driving gold higher. Whether they get that or not is unclear. 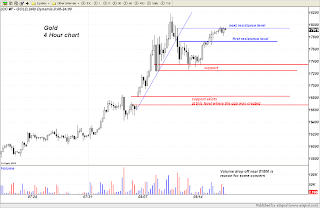 I should note here that the Continuous Commodity Index ( CCI ) will simply not go quietly into the night. Every time it appears that this index has topped out and is going to validate the deflationists' arguments, it rebounds and moves back up again. By and large, the complex as a whole was higher today bringing the index back up towards the 650 - 655 level which has been acting as a resistance zone on the chart. 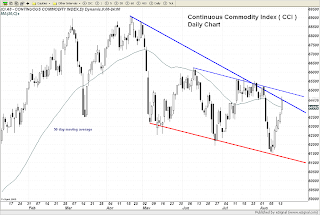 With this CCI Chart in mind, take a look at the following silver chart and you might see the type of connection that exists between the two. The CCI peaked in late April; so too did Silver. The fear trades knocked the CCI down; so too did these trades knock down the price of silver. In effect, silver has been held hostage to the broader climate of risk aversion that has been dominating the market for the last few months. 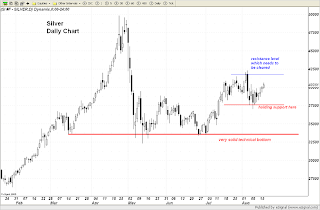 Lastly, I once again need to comment on the failure of the HUI to take out this incredibly stubborn 580 level and hold it. It took out that level early in the session today but then failed to build on its gains and moved lower retreating away from the number almost as if on cue. As a trader I must marvel at the obvious footprint being created on this price chart. I can only surmise at the amount of short selling that is being required to hold these mining shares in general from surging higher. One gets the sense that the bears are doubling down and determined to prevent their positions from going underwater. All it is going to take to see a massive short squeeze in this sector is for one or more of these large short sellers to decide that the better part of valor is getting out. The first guy out will win - the rest will get buried. They must all certainly know this. 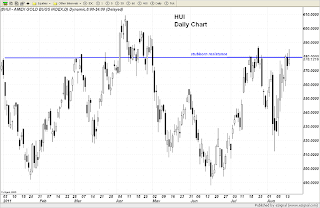 One last thing - The US Dollar fell down to a major support level (AGAIN) before it bounced slightly higher off of that level. This level near 73.50 is taking on increasing significance. As you note on the chart, it has not spent much time below this area before it moved higher. If, and this is a big IF, the Dollar falls through this level and does not rebound rapidly, things could turn quite ugly for it in a real hurry. I find it rather telling that with all the turmoil and uncertainty besetting the Euro Zone in regards to its debt issues, the Dollar is barely hanging on for dear life. That is not exactly a ringing endorsement of the merits of the greenback in my estimation. Both Dow Jones and the Wall Street Journal are reporting this morning that leftist strongman Hugo Chavez plans to nationalize the gold industry of Venezuela. There looks to be little if any influence on the gold price from this news. About the only effect that I can see is on mining companies that have their operations down there.