Market Complacency is on the Rise

The following chart is of the CBOE's Volatility Index, or the VIX as it is generally referred to by traders and investors. It is used to gauge investor sentiment in general. Sharp spikes are evidence of RISING FEAR associated with global or domestic economic concerns while low readings indicate a relative state of complacency among investors. In the past these spikes higher have proved to have been good buying opportunities since they have heralded the onset of Central Bank LIQUIDITY MEASURES to combat deflationary headwinds. 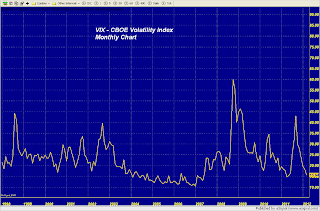 While this indicator is generally not very good for picking tops (notice how long it remained mired below 15 during 2005 - 2007) it does serve to show how quickly Central Bank actions have eased investor worries. Notice the periods during which QEI and then QEII were underway and how that monetary easing sent the index lower. Investors were willing to ignore all the deep-seated structural issues ailing the Western economies (DEBT, DEBT and MORE DEBT, low employment, falling real estate prices, rising costs, etc.) as long as the Fed was keeping the money spigots open. NO WORRIES MATE - the FED HAS OUR BACK was the motto.
It will be interesting to see how this index responds as we move further into the year and as events unfold. It is generally true that there is a lull before the storm  - we'll see.
Posted by Trader Dan at 1:49 PM 4 comments:

The gold market seems relatively quiet in comparison to some of what we have been treated to over the last couple of weeks. Some traders are probably welcoming the break to see if they locate their stomachs after last week's wild ride.

Sellers surfaced near the $1720 resistance level noted on the chart preventing gold from continuing to build on last Friday's rebound off the $1680 level. It fell below psychological support at $1700 but has moved back above that level here later in the session, although not by a lot. 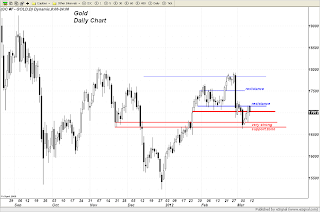 The reaction to the late Friday ISDA news has been somewhat muted with some risk aversion trades being seen in today's session. I am noticing however that many of the commodity markets seem to be managing some late session bounces. It seems that at least for today, shorts appear unwilling to try pressing many of them any lower.

The same thing is being seen in the S&P 500 pit with early session weakness giving way to some short covering and light buying although the market still remains lower on the session.

Bonds were up nearly one full point but have given up the brunt of their gains, remaining slightly higher as we head into the after hours.

One gets the impression from the price action across a larger number of markets that neither the bull nor the bear camp is willing to push their case too hard today.
Posted by Trader Dan at 12:42 PM 2 comments: