Once again, as has been the recent pattern in the gold market, gold priced in terms of the Euro, or "EuroGold", is putting in a very strong showing in today's trading session. If you note on the weekly chart, it has moved to within about 32 euros of its former all time high in price. Many traders/investors may be dismissing European Sovereign debt issues, but the gold market certainly has one eye on it.

I want to see how this market acts now that we are moving into these regions as this will be a decent barometer of sentiment towards the woes surrounding Europe. Any further escalation of issues associated with those problems will carry this market to the all time high. The flip side becomes if traders feel that the worst is over and is behind them. 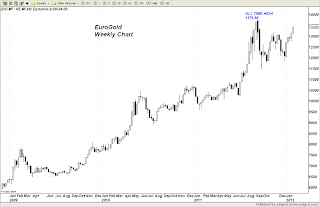 I should point out that as gold nears this all time high in euro terms, it is also moving into a region where I expect it to encounter significant selling resistance in US Dollar terms, namely the zone near $1775 - $1780. That makes two separate charts showing two distinct resistance levels. If the bulls can power it through both levels, we will see a sharper move higher in gold. If it fails here, expect some longs to begin booking profits and liquidating longs while awaiting a lower buy back in point. 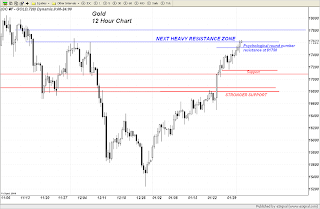 I find it noteworthy in today's session that two key markets that are heavily tied to liquidity conditions (risk on trades) both moved lower - Copper and Crude oil. Those markets bear close monitoring as they are closely attuned to sentiment towards the overall global economy and by inference, the risk trades and hedge fund money flows into the commodity sector in general.

As you can see copper has been moving higher in anticipation that the worst in the global economy is behind us and the Central Bank actions to provide liquidity would be forthcoming. Hedge fund managers have had a lot of money sitting on the sidelines since the end of last year and need to do something with it if they are going to show any profits for their clients. They have taken the price of copper $0.50/pound higher in a month's time but that has been on the expectation of improvements in demand. It appears that this might be as high as they can take it without some sort of actual evidence that demand for the red metal is really out there from anyone besides speculators. This market is notorious for big players taking the actual metal out of warehouses in one city and moving it to another in an attempt to paint a picture of strong demand so getting a read on it can sometimes be quite tricky. Still, the charts are showing a stalling of upside momentum just shy of $4.00. The fact that it has not been able to best this level yet in a convincing fashion is reason for pause in the commodity sector party that has been going on thus far this year.  While copper has not broken down technically on this price chart just yet, any failure to stay firm could signal that risk traders are having some second thoughts. 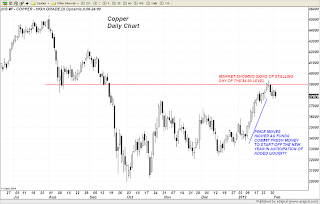 This chart looks heavy as it continues to reinforce the ceiling for crude just above the $100 mark. It is evident that without some sort of conflict in the Persian Gulf that the market will not tolerate $100 crude oil for long as the global economy is simply too sluggish. Crude has backed off from $100 once again and is now moving down towards the botom of its recent range near the $94 - $93 level. One would expect it to hold this level and move higher again if traders are convinced that liquidity measures will be sufficient to keep the global economy moving forward and prevent any slowdown or contagion effects from European debt woes. It might however take an actual burst of QE3 to take this market through $100 and hold it there. Watching this chart should help us get a feel for where hedge fund money is going in the immediate future.

I get the distinct impression from examining this chart that crude oil traders, after taking it above $100 on liquidity expectations and tensions with Iran, turned to each other in the trading pit and remarked, "Now what?". 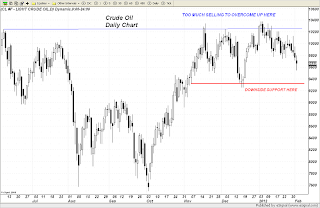