Federal Reserve - the Buyer of ONLY Resort

I came across the following story in my readings today and quite frankly, was thunderstruck after going through it and looking at the data. I did not think this was possible and am still at a loss to explain it so perhaps some of you math whizzes out there can make it simpler for me. Either way, it is simply mindboggling!

Here is the title - see if it makes you sit up and take notice as it did me!

Fed Has Bought More U.S. Gov’t Debt This Year Than Treasury Has Issued

Here is the link:
http://cnsnews.com/news/article/fed-has-bought-more-us-gov-t-debt-year-treasury-has-issued

Here are the appropriate links referenced in the article.

If I did my math correctly, the size of the Federal Debt increased $47.224 Billion since the beginning of the year.

Now look at the Fed Balance sheet holdings of US Treasuries over that same period.

Amount of Increase in Fed Treasury Holdings since the beginning of the year:   $51.064 Billion

That is $3.879 BILLION MORE than the US Treasury has issued this year!

Again, I have no idea how this is supposed to be possible but the numbers are what they are. Scotty beam me up. We are freakin' doomed!

Gold and Silver both remain Rangebound

Gold cannot seem to muster enough energy to break out from the top of the trading range near $1695 while silver seems to run into selling above $32.

Today was all about the selling in the Euro which tended to bring back some of the RISK OFF trades or at the very least, induced some profit taking in the RISK ON trades. Draghi did not offer much in the way of support for Euro bulls and after that big run up, they booked profits. That brought on some selling in both gold and silver, along with the commodity sector in general. Even crude oil was finally knocked lower for a change. 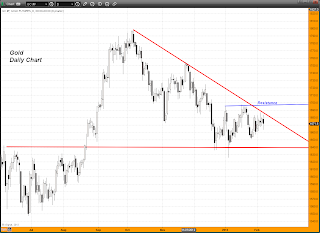 Under the Category of "What the Hell is Going on Here?"

This has gotten beyond curious and has now become outright worrisome. What in the hell do the feds need with this much ammunition?

I have long suspected that if they cannot do an outright grab of law-abiding Americans' guns, they would shift tactics and go after the ammunition. Any of you who shoot regularly must have surely noticed the run up in price of a box of ammunition over the last several weeks.

Between drone strikes on American citizens and this, you have to be increasingly concerned that something is going on that should alarm any citizens who cherish liberty.

The Department of Homeland Security is set to purchase a further 21.6 million rounds of ammunition to add to the 1.6 billion bullets it has already obtained over the course of the last 10 months alone, figures which have stoked concerns that the federal agency is preparing for civil unrest.