The internet has been awash with comments recently about the downdraft in silver and the strong increase in Open Interest on last week's big down day. As usual, the chatter is about an orchestrated attempt by JP Morgan to smash the price of silver lower so that they can cover their "losing short position".

Let me first state that I am a firm believer in the view that the US government has a vested interest in controlling the price of gold. Being a good friend of GATA, we both have ridden through the ups and down of this together for the last decade. However, that being said, not every move lower, particularly in the Silver market, is the result of efforts by Morgan.

Part of the problem that some of the authors have, authors whom I might add see every single move lower in silver the result of price capping by Morgan, is that they do not understand how traders, particularly large traders, react to changes in sentiment and how they will adopt defensive strategies to cushion themselves against further losses until they can better sort out what they want to do next. These would do well to understand the nature of spreads and the ability to use spreads as part of a strategy to cushion against losses while in a defensive posture.

Take a look at the following chart of the CCI, the Continuous Commodity Index, versus the price of Silver. I mentioned not all that long ago, that silver was not going to go anywhere until the chart of the CCI turned solidly bullish. Why? Because Silver, for all of its history as a monetary metal in many places around the globe, is still regarded by large hedge funds and other large investors, as a RISK ASSET; one that performs strongly during periods in which INFLATION is the main concern. 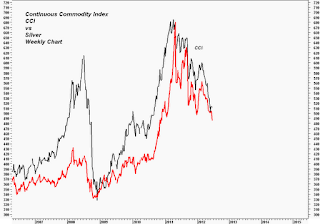 Look at the solid black line which is the CCI. Notice how it has been moving relentlessly lower ever since it topped out near 700 back in April 2011. Now look at the solid red line, which is the closing price of silver. It topped out that same month near $50 and has been headed relentlessly lower also. Why? Because traders increasingly became convinced that the global economy was slowing, being impacted by woes out of Europe as well as near stagnant conditions across the US and elsewhere.

As a matter of fact, the chart patterns between the two, are very similar and have been almost identical since September of last year.

Now take a look at the following chart detailing the Commitments of Traders report. 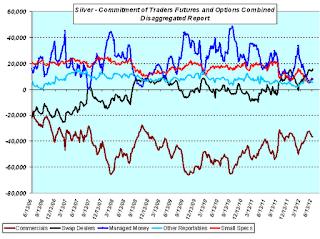 I have noted the various categories of traders on the Legend below the chart. Look particularly at the blue line in the positive section of the graph. It is important to note here that this is the NET LONG position of the hedge funds. Note how it peaked and then turned lower in September of last year, then moved solidly lower until the beginning of the year when it began to turn higher once again. What was that all about? Once silver peaked near $50 the sentiment shifted across the entire commodity complex and soured all the way into the end of last year. Then, at the beginning of this year, traders began to expect action in the Euro Zone from the ECB with some help from the Fed. They thus started to rebuild long side exposure to the entire commodity complex. That buying drove silver prices $10 higher to start the first two months of this year pushing it to near $37.50 in February. That was it - from then on, it has moved steadily lower on a monthly basis tracking the CCI nearly tick for tick.

What does not show up on this above graph however, is the actual NAKED SHORT POSITION of this same category of traders. For that, take a look at the following graphic. Can you see what is taking place? Hedge funds are building short side exposure to silver. I have only included the last 18 months worth of data but as you see, a mere month ago and this category of traders has been as bearish as they have been in a good while. 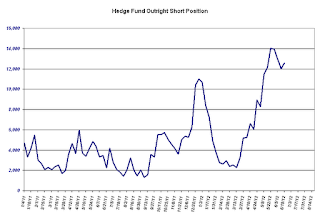 If we draw out the chart a bit longer, it becomes quite insightful. Notice back to the summer of 2008 when the credit crisis first erupted. The outright short position of the hedge funds is now even larger than it was at that point. 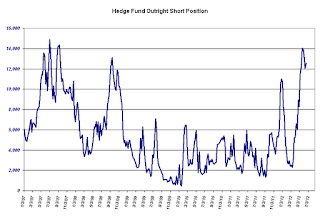 If you combine this with the fact that even as hedge funds are LIQUIDATING long positions in silver there is at the same time, some funds in this category whom are now building SHORT positions, it does not take much market understanding to realize why the price of silver is moving lower. It DOES NOT TAKE JP MORGAN 'smashing silver' to knock the price of silver lower. If anything MORGAN is using this hedge fund activity to actually cover their NOT LOSING short positions as some of these commentators keep telling us, but their EXTREMELY PROFITABLE SHORT POSITIONS.

For the sake of time I am not going to put up a chart of the Commitment of Traders of Copper, but suffice it to say, that hedge funds have begun building short copper positions in there this year also. Note the Copper peaked in February of this year, the exact same month as Silver peaked. Was JP Morgan "smashing copper lower to cover their losing short bets"? The answer is obvious - of course they were not - the hedge funds are taking copper lower just as they have been taking silver lower. Why? Because Copper is also viewed primarily as a RISK ASSET, just like silver, and a harbinger of the rate of growth expected in the global economy. 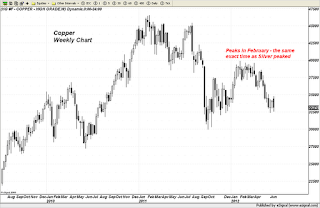 Silver has been finding good buying near and just above the $26 level from some big players. This buying has been of sufficient size that it has been able to absorb this speculative type selling originating not from Morgan, but from the hedge fund community in general. As long as these buyers continue to see this level as a good VALUE, silver will hold. If they pull back for any reason, hedge fund selling is going to take this market lower. It will not be Morgan that does it.

The conclusion to all of this is simple - as long as the environment persists in which traders are more concerned about slowing global growth and/or deflationary pressures, both silver and copper for that matter, will find it difficult to mount any sort of sustained upside activity. Note that I said, "Sustained". That means that we can and will get occasional upside moves higher when sentiment temporarily shifts and traders expect Central Bank actions to be of sufficient size and scope to counter the deflationary forces building in the global economy or economic data looks positive in some instances. But until we get something that occurs that will ACTUALLY produce a more lasting impact in that regards, hedge funds will be selling rallies.

Once again, the ball is firmly in the court of the Central Banks.