UP and UP she goes - where she stops nobody knows

I am becoming more and more convinced that the US Monetary Authorities have engaged in a process which is resulting in the formation of another bubble, this time once again in the US equity markets. Think back over the last decade+ and what we have seen occur in the US financial markets beginning at the height of the stock market bubble that popped in 1999.

Interest rates were successively slashed to insanely low levels with the effect of PILFERING the retirement earnings of our senior citizens and those who are dependent on fixed income investments. An entire segment of the population has been robbed of a decent rate of interest on their life's savings as a result of these vultures masquerading as economic wise men.

The VICTIMS of the official monetary elites ( and yes I use the term 'victim' because that is PRECISELY what they have become in this game of madness) have been forced into scouring the land looking for a place, a sector, somewhere, anywhere - that they can hope to obtain some sort of decent yield from a SAFE, CONSERVATIVE INVESTMENT with which they can fund their last few years on this earth. Instead, many of them have been forced into joining the marauding band of wild-eyed speculators known as the hedge funds which scour the land raping and pillaging various sectors in succession looking for that precious and rare commodity known as 'Yield'.

And what pray tell have we witnessed our monetary lords and barons doing for the last ten years as far as policy? - why nothing else but managing the fallout from the popping of each successive bubble. Bubbles, which I might add, they themselves have created by employing the same prescriptive medicine, ad infinitum, stupidly looking for a different result each time they experiment upon us. One gets the distinct impression that our financial system is becoming a FRANKENSTEIN ECONOMY - the creation of madmen who cannot see what they have loosed upon the world.

The following chart of the S&P 500 tells the story of yet another bubble forming, once again in the world of equities. Yet this is a bubble being DELIBERATELY BLOWN by the Fed in the hopes that this ever-expanding balloon will engender a corresponding increase in consumer confidence in turn inducing an increase in consumer spending in the process - spending which must occur to lift the economy out of its doldrums.

Once upon a time - a long, long time ago -  in an ancient bygone era, during which primitives ruled, men naively believed that a rising stock market was the RESULT of a thriving economy. Nowadays, this is no longer true - instead there is a new religion that has grown to supplant the ancient one. This new religion, complete with its priestcraft of Central Bankers and well connected adherents, has professed a NEW CREED - one designed to drive out any vestiges of the old one. This new creed believes that if the stock market can be MADE TO RISE, the THRIVING ECONOMY will then follow. In other words, cause and effect have been reversed.

What is then required to validate this creed is to induce, cajole, herd, or otherwise force through eliminating alternatives, speculative money flows into the equity markets. Once stocks rise, opinion then turns and with opinion turning, crowd behavior then follows.

With that in mind, observe the latest chart of the S&P 500, a broad representative of the US equity markets. Note how well the speculators are being herded into the equity markets once again seeing that there is no hope of obtaining yield in a near zero interest rate environment - where else is all this money that has been created by the Bank of England, the Bank of Japan, the Fed, the European Central Bank, going to go? Even the PBOC and the Bank of Brazil are getting into the act.

Think back to 1999 and the conditions existing in the economy as far as employment and real estate goes - consider the US budget situation back then and compare that to where it has degraded now. The latest FOMC release informed us that the economy is showing moderate improvement but still faces enough challenges that it requires interest rates to remain near zero for more than a year and a half (late 2014). And yet the S&P 500 is merrily charging higher headed directly in a straight line back to the same level it was prior to the debacles that we have seen first when stocks imploded in 1999 and then again in 2008.

Yes, indeed, stocks have become the only game in town due to the machinations of these plotters and schemers who control monetary policy and attempt to influence crowd behavior. Welcome to the Brave New World of Central Planning. 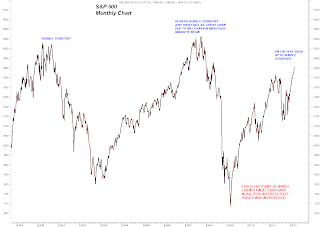 By the way, does anyone else beside me, see the similarity in the chart patterns of both the Crude Oil market and the S&P 500? 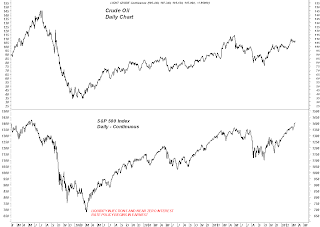