Yesterday gold bounced off its support level; today it bounced off its resistance level, which is the 200 day moving average. As you can clearly see on the chart, that line is holding the market quite firmly for the time being.

Hedge funds are using this level against which to sell rallies while large physical offtake is providing the base of support from $1640 on down.

The market is stuck in a range for the time being with neither the bull nor the bear camp gaining a decided short term advantage for now, although the chart suggests that the bears have the intermediate term advantage.

Unless or until the bulls can take out the 200 day moving average and then get the price back above last week's high, the support level is going to be in danger if physical demand slacks off one iota. Once again it will be up to that side of the gold equation to try to put a firm bottom in this thing especially with speculators in a selling mood. 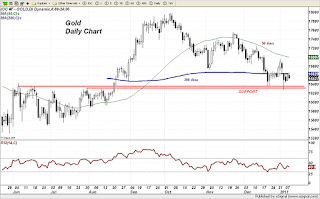 One of the things that is happening is that the recent price action has gotten the large investment banks, which issue regular analysis for their clients as to future price direction for many markets, have definitely changed their tune in regards to gold. Many of them are now lowering their previous price forecasts for this year.  That in turn has led to money outflows from gold and from the gold ETF. As a matter of fact, bearish option bets in the gold ETF are now outnumbering bullish bets based on the put to call ratio.

That goes to prove that price action makes market commentary.

Incidentally, this is one of the main proofs, let's call it exhibit A, that all traders/investors should make their investment decisions based on their own analysis of the technical price charts. These guys are always their most bullish when prices are soaring and their most bearish when prices are falling. In other words, they prophesy AFTER THE FACT. By learning how to properly read a price chart, you can be out well BEFORE they come out with their prognostications or IN before they switch to the other side and begin raising projections once again.

If you want to have another reason why gold is struggling some right now, as is silver, take a look at the following chart of the overall commodity sector. Notice that it too has failed to take out and remain above its 200 day moving average and is now sitting precariously right above a major support level.

While we wait for the inevitable inflationary consequences for all this Central Bank liquidity injection, for the time being, inflation scares are non-existent. Whether the monetary base is falling or the velocity of money still remains low, it is difficult to make a CURRENT CASE for inflation as long as this key index is so weak on the chart.

While interest rates on the Ten Year had recently risen to over 1.95%, they have now fallen back towards 1.85%. We will have to keep an eye on that key indicator or potential inflation concerns, as well as the long bond which has popped lately and recovered somewhat from its beginning-of-the-year selling avalanche. I mentioned previously and want to reiterate - the monetary masters will not tolerate rising interest rates and will do what it takes to prevent that. 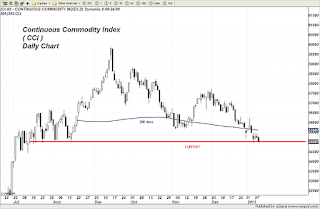