One of the big selling points by Draghi and those favoring the ECB bond buying program, to assuage investor fears of its inflationary impact, was that the purchases would be offset or sterilized so as to provide for "price stability". I suspect that this was emphasized to deal with the strong German opposition to the plan as the German experience with hyperinflation during the Weimar republic has deep roots in the German national psyche.

The question that myself and others have, is exactly how this sterilization is supposed to proceed. What will the ECB buy in order to reduce the amount of money in circulation in those nations that ask for the "bailout mechanism"?

Remember, any of those troubled nations' bonds that get purchased by the ECB mechanism will be sitting on the balance sheet of the ECB in exchange for Euros. One assumes that the nations will of course spend these Euros to meet their various obligations, whether those be pensions, salaries, infrastructure, medical, etc. That means this money can reasonably be expected to go into circulation. So what exactly does the ECB then do to extract a corresponding amount of money out of circulation so as to render its bond buys neutral?

I for one am most anxious to see the details as I do not believe for one moment that in practice this is what is going to happen. This for certain is going to be an interesting laboratory experiment.

It also seems to me that gold is not buying into any sterilization talk. It would not be sitting at a mere 14-16 Euros off its all time high if it did!

"And She'll Have Fun, Fun, Fun, 'til the Bankers take the Punch Bowl Away

Pardon an old Beach Boys fan for taking Liberties with one of their classic song's titles but this popped into my mind today watching the market response to the ECB's bond buying announcement.

US economy in the toilet? No problem - new 52 week high in the S&P 500. While you are at it, give that 'ol Japanese Yen the Whack-A-Mole treatment. Time for that carry trade again. RISK ON! Damn the Torpedos, Full Speed Ahead!

I really think that some creative genius should make a spoof of the Star Trek, the Next Generation series, involving Draghi and Bernanke as a combination of the Borq Queen pronouncing those fear-inspiring words, "RESISTANCE IS FUTILE!" At least for today, the markets have been absorbed into the Borq Collective and are now assimilated. All sense of individualism has been annihilated leaving only the will of the hive supreme.

Once again the Central Bankers of the West have unleashed another torrent of hot money flows right smack dab into the commodity sector guaranteeing that higher energy prices are here to stay. Did anyone check out what happened to gasoline, heating oil and crude oil today? WTI is now less than $3.00 from the $100/bbl level while gasoline is back over the $3.00/gallon level wholesale. Keep in mind that this is well after the end of the traditional "Driving Season". Anyone expecting or hoping for a bit of relief at the gasoline pump should get disabused of that notion.

Gold and Silver of course wasted no time in promptly blowing right through overhead resistance levels on the chart as the metals are now functioning exactly as they should function whenever a set of Central Bankers decide to further debauch their currencies. Take a look at gold priced in terms of the euro, or Euro-Gold. It moved within 14 euros of its all time high. The ECB's actions are certainly not being lost on European based buyers of the metal. They know damn well what this idiocy is going to precipitate. 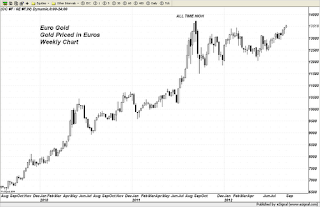 Incidentally, Euro Silver has broken its downtrend and looks as if it wants to make a run towards the 28 Euro level. I would venture to say that if it breaks through that barrier, we will see $40 Silver here in the US. 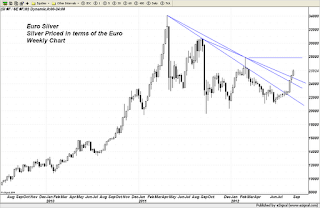 Moving back to the US-centric view, one thing that I am watching that in my mind is even more significant that gold clearing the psychologically-important $1700 level is the fact that this occurred as the HUI has managed, FINALLY, to clear that huge overhead resistance level of 460. This level has held the miners in check since April of this year as any and all attempts to better, up to now, have failed. If the HUI can hold onto its gains into the end of the week, we should see it run to 480 whilst many of the miners reflect breakout patterns on their individual stock charts. A push through 480 sets it up for a run above 500 to 510 or so. 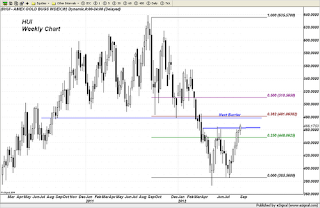 It is always more constructive to see BOTH the mining shares and the bullion markets taking out overhead resistance levels at the same time on their price charts. One has to be a bit more careful when bullion is moving higher while the shares are languishing.

By the way, some of today's market chatter is that the stronger ADP private employment data, combined with the action by the ECB, will make it much easier for Bernanke and company to say "NO" to another round of QE3 right away over here. That is where some of the profit taking in gold and silver is coming from. Let's watch and see how things settle out by the end of the day.