I am including this link because I hope you have had the time to view the short (less than 2 minutes) video at Youtube which is at the link shown below in the previous post.

Mocking the stupidity of something is a good way to show the absolute uselessness of it as a means of actually saving precious lives but even though many of us at this site can hopefully understand that the main goal is to actually PREVENT innocents from being murdered, there still exist too many in this nation who opt for SYMBOLISM OVER SUBSTANCE. Such fools continue to advocate for laws which accomplish nothing except to disarm law-abiding citizens and strip them of the means to defend not only their person, but those around them.

Here is the link containing the headline: As a sideline, more years ago than I care to remember, I actually took a couple of courses at this very location.

Happy Days are Here - A Cure for Gun Violence has been Found!

The big news today is the long-awaited but pretty much expected response by the Bank of Japan to engage in further stimulus measures by basically committing to open-ended purchases of government securities and setting an inflation target of 2%.

The idea is to stave off the deflationary funk that has gripped Japan for well over a decade and more with the deliberate intent to further suppress the value of the Yen on the foreign exchange markets.

Because the purchase commitment seems to have been pushed into 2014 before it begins in earnest, speculators did the exact opposite of what the new government was attempting; they shoved the Yen higher shortcircuiting its steady downward trend.

Now we will have to wait and see what happens next if the Yen continues appreciating instead of depreciating as they had hoped for. If the specs defy the intent of the powers-that-be in Japan and refuse to get on board with the program, my guess is that we will see a public response by the Japanese monetary authorities as their political bosses, not to mention INDUSTRY LEADERS, will pressure them to undercut any Yen strength.

Traders outside of the forex markets are looking at the move by the Japanese as highly inflationary elsewhere which is perhaps the main reason behind the mvoe higher in both gold, silver, copper, platinum and palladium today.

It is ironic however to see the Yen moving higher over disappointment that the Japanese did not adopt an AGGRESSIVE enough policy to induce further yen weakness and by consequence higher inflation while at the same time the metals, both precious and base, were moving higher on expected inflation coming down the road.

Throw in one more weird day in the long bond as interest rates actually moved lower even while the equity markets continue with their giddiness. Nothing fazes the bulls on Wall Street right now and I do mean, nothing. Paper asset inflation is alive and well.

I wanted to show you a weekly chart of the Silver market over at the Comex to give you an indication of where this thing is in the larger scheme of things.

Notice that the pattern shown continues to constrict with an upward bias to it. Can you see how significant that the region beginning from $34.50 up to $35.00 has become? 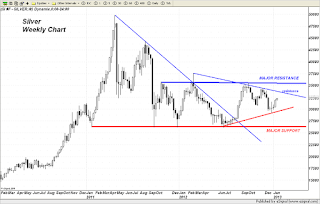 Silver is currently attempting to make up the losses it incurred in December of last year. It began that month near $33.50 and then fell down below $30 hitting a low near $29.25 before rebounding slightly to end the year.

It is currently about $1.20 lower than from where it started December 2012. If talk about silver shortages to the extent that are being rumored is true, then this market will CONFIRM those rumors by launching a breakout on this technical chart and that means, at a bare minimum, a solid breach of $35.50 on a weekly closing basis. For now the chart bias is not wildly bullish but it is friendly as the market is in a consolidation pattern with a slightly higher bias.

As stated previously, higher platinum and palladium prices are tending to reinforce momentum based buying in the silver market. It also aids the cause of the metal that the soybean market is responding to some potential weather issues in South America with prices moving higher over at the CME group futures. A very large crop is expected from down that way this year so traders will be monitoring any indication that the weather might impact yields and thus overall supply. Rising grain prices tend to keep upward pressure on the Continuous Commodity Index ( CCI ) and thus helps silver as traders buy on the expecation of inflation pressures at the wholesale level.