There is only one comment that I can make based off of what I see from this chart; either the gold mining stocks are tremendously UNDERVALUED compared to the price of the metal or the gold price is way too high. 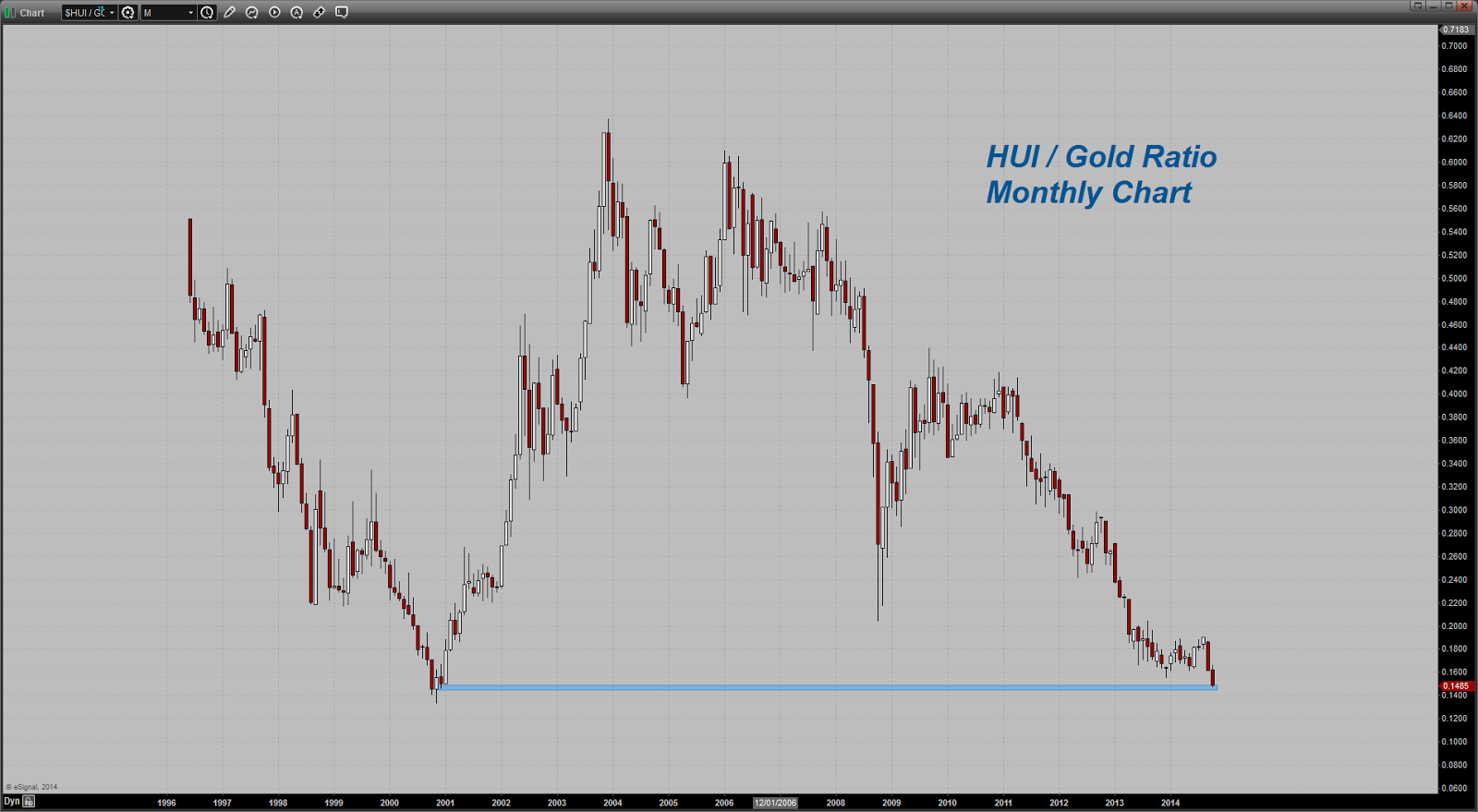 This ratio just touched a level last seen in DECEMBER 2000! That is FOURTEEN YEARS AGO!

Perhaps some more of these gold miners need to head to bankruptcy but with the ratio at current levels, and with the HUI itself trading at a SIX YEAR LOW this month ( refer to that chart I posted previously today) I am leaning to the view that the gold price is too high.

Talk about a disaster....

The first is an index of the junior mining stocks, the GDXJ. Note well that it has completely given up all of its gains for the year and is essentially where it began the year on the first trading day of January 2014. 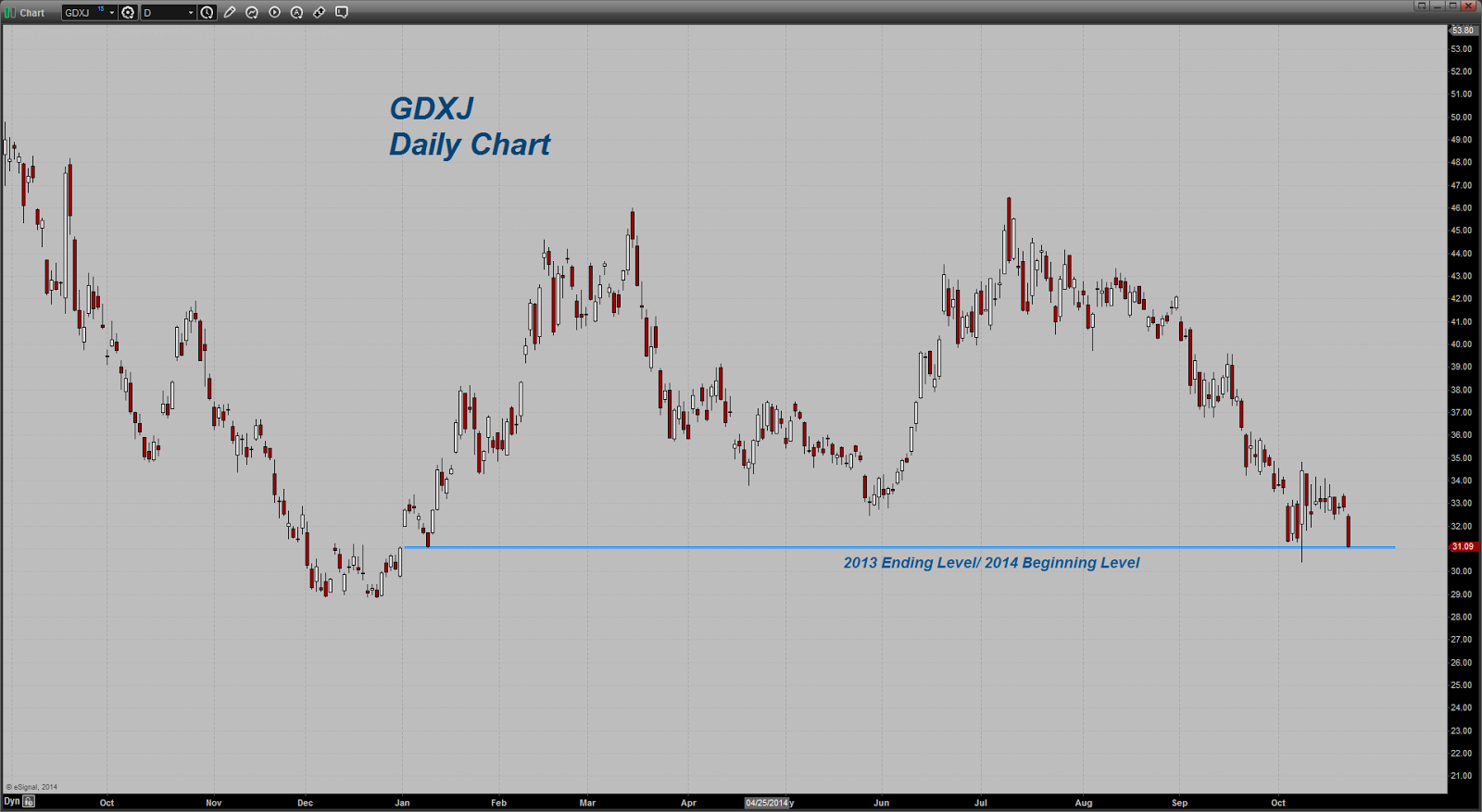 The second chart is one of the HUI. Notice that this chart is even worse than the former! The index is off 6.6% from its starting level at the beginning of this year. 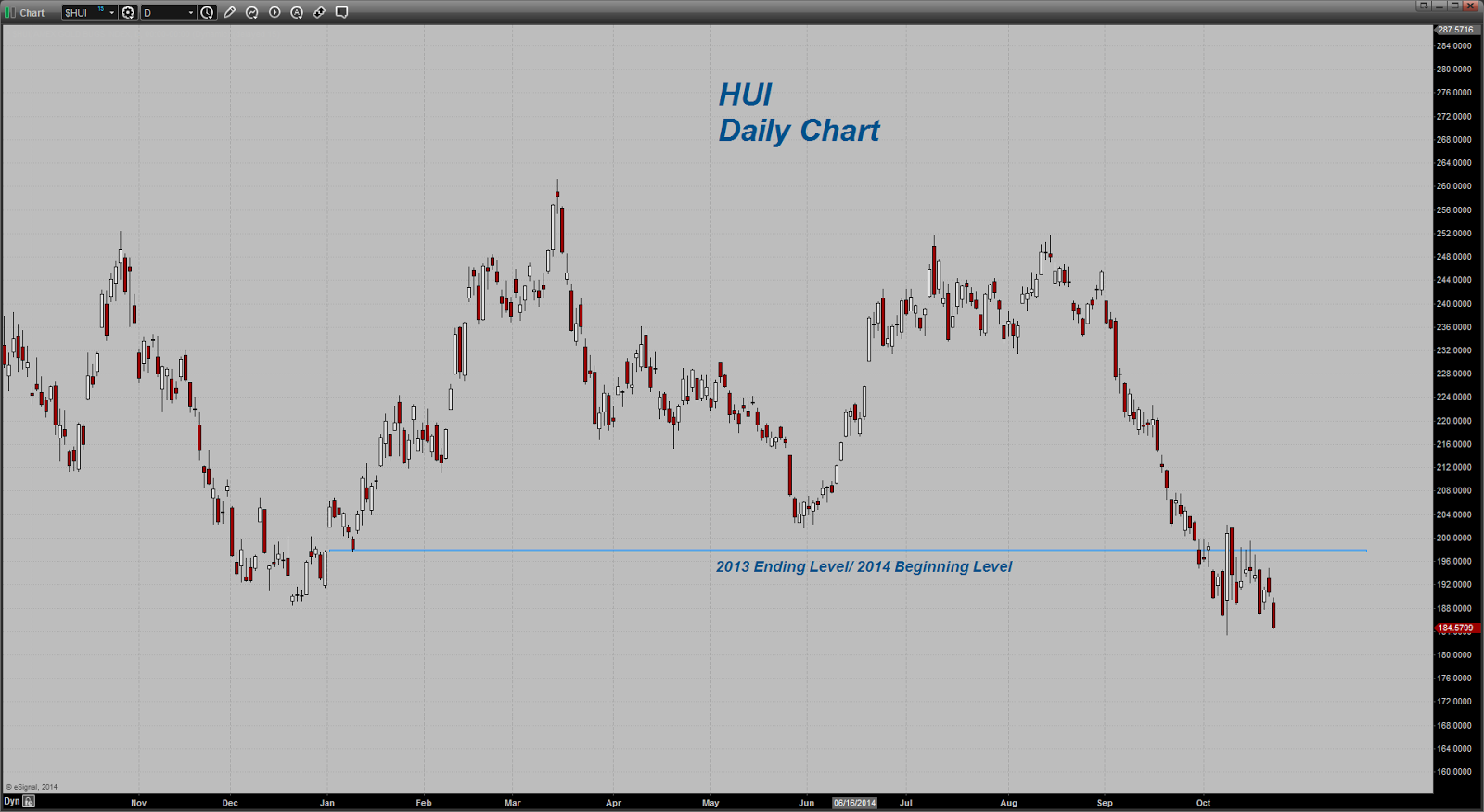 As we are approaching the end of the month, I thought it might benefit the reader to take a long term view of this sector's performance. To say it has been, "poor" would be a huge understatement.
Notice that at its current level, the index is on course for the LOWEST MONTHLY CLOSE since May 2005! That is NINE YEARS AGO! As it now stands, the index is at levels last seen 6 years ago, during the height of the credit crisis. 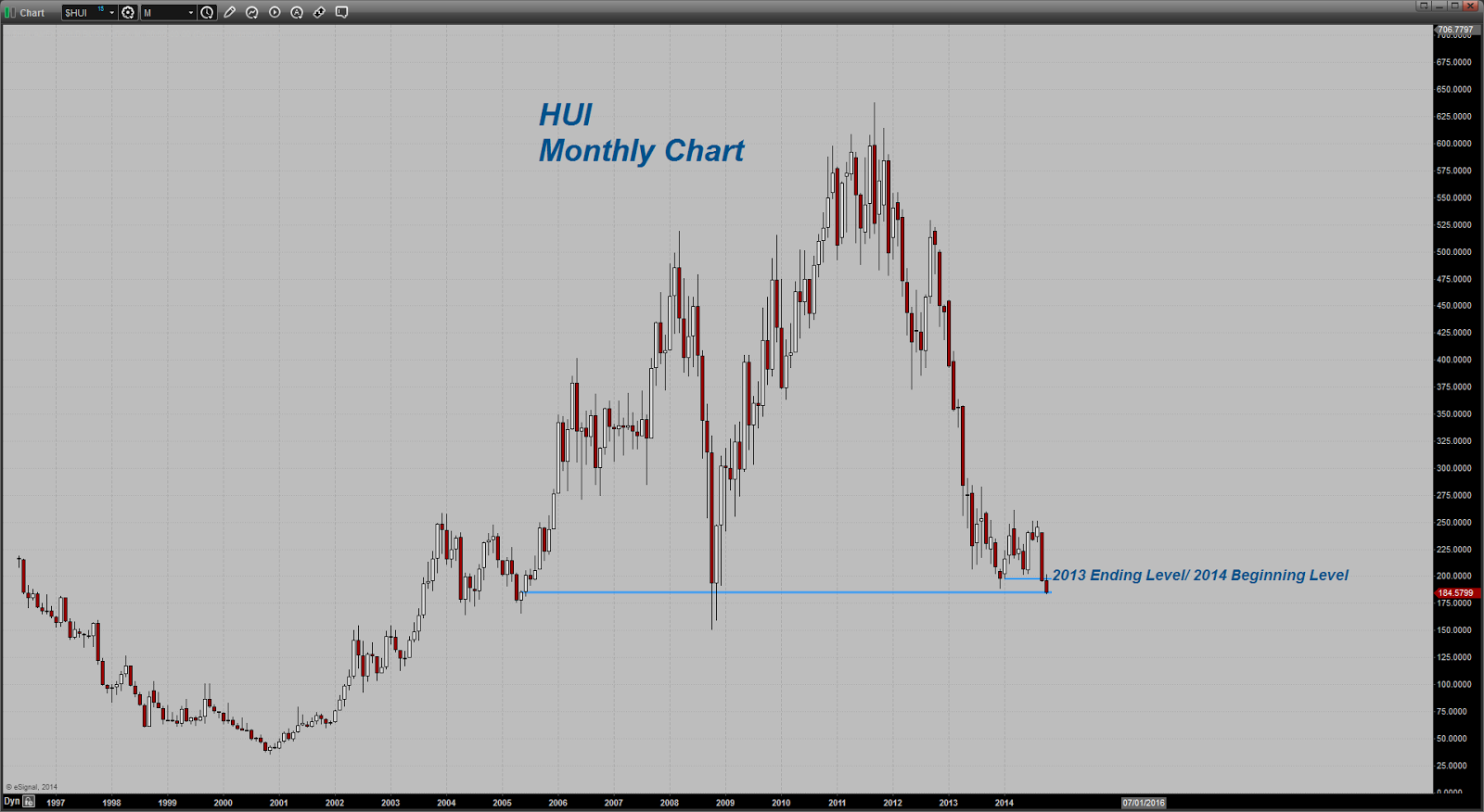 The reason for the charts is simple - the mining shares still tend to lead the price of gold. They did it on the way up during the bull market phase of gold, and they did it on the way down during the current bear market in the metal.
So far gold has been able to stay above $1240, which is constructive for the bullish cause but failure to hold this key level will embolden bears, especially given the abysmal charts of the mining shares, not to mention the plunge in reported holdings of GLD ( more on that later).
As mentioned yesterday, if the price falls through $1240 and cannot immediately recover, it will moves towards $1220. Below that is $1200.
Here is an updated chart of GLD. Once again, the reported holdings dropped. This time it was a reduction of 2.11 tons, bringing the total reported holdings to 749.87 tons, down 48.35 tons since the beginning of the year. 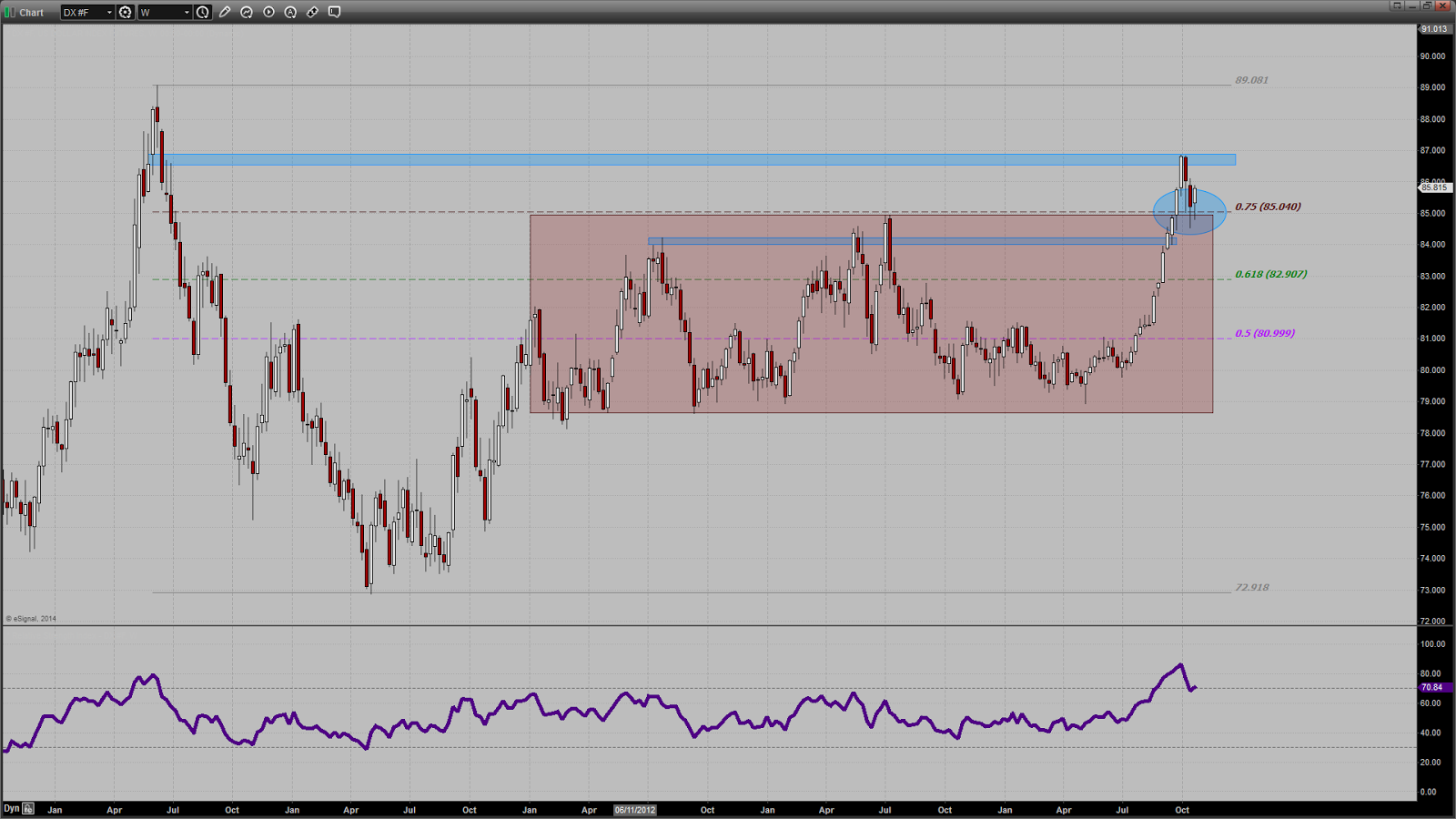 As long as the Dollar can maintain a weekly close above the bottom of its short term range ( 87 - 85), it looks like it is basing for another leg higher. A failure to hold 85 on the downside by the end of this week, will negate that view. For the next leg higher to commence, 87 needs to fall to the bulls.

Switching a bit to the ags - Feeder cattle finally had a day in which they did NOT make a limit move. Packers have been able to push the beef higher to end users and that caused bulls to rush back in to buy back what they were throwing away in that complex yesterday. Perhaps the falling unleaded gasoline prices are allowing consumers to afford that insanely high beef for the moment but cheap pork and cheap chicken are going to soon undercut that in my view.
Meal looks like it might have run out of upside steam in today's session. If so, the beans will follow as it is the meal which has been dragging the beans, and the corn I might add, higher.
Expect to start seeing stories dealing with the difficulty in moving/storing this year's harvest surfacing soon.
Posted by Trader Dan at 4:50 PM 18 comments: