Finally - the August soybean contract has gone the way of history and is outta there, finished, etc. This contract has been the playground for those looking to create some shenanigans in the bean pit for some time now. In the face of a record, bin-busting crop, those who have been holders of old crop beans, have refused to let them go, forcing a huge short squeeze in that particular month that has tended to create all manner of volatility in the soybean market. The dichotomy between an incredibly tight old crop carryover situation and the potential for a massive new crop harvest, has resulted in increased volatility in a pit that is already known for its seemingly random movements. 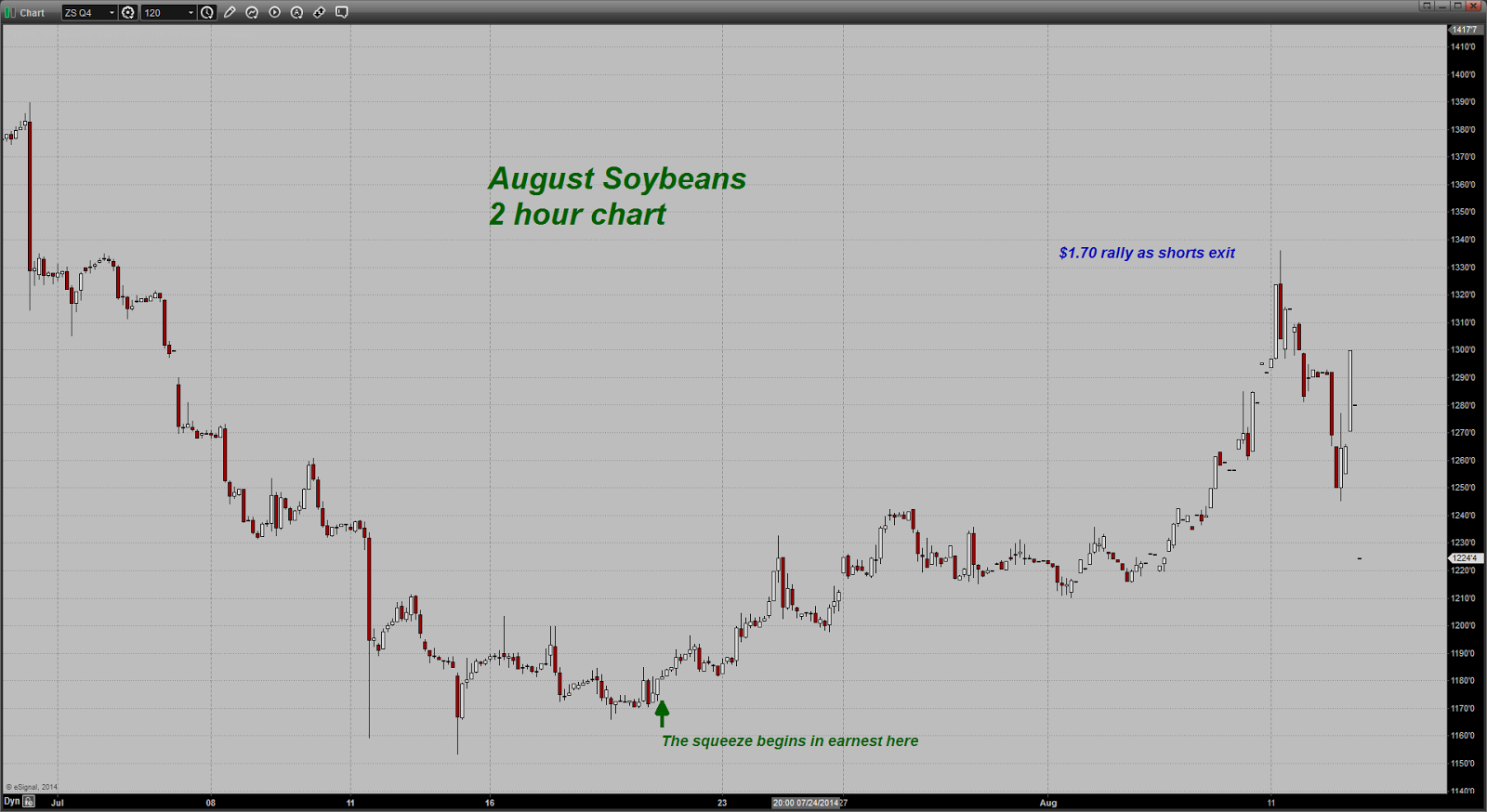 All of these shenanigans managed to do is to guarantee that S. American farmers are going to move to beans this planting season which will be underway come late September - October. American farmers watching the squeeze occurring in the old crop August beans, have gotten bulled up at precisely the wrong time. It is very difficult to price expected harvest when you are sitting there watching a screen in which the nearby month is soaring in price. The fact is however that we are dealing with two distinct harvests - one from last year and one expected this year. There is a world of difference between the two and farmers here had best be cautious about formulating marketing plans based off of the antics of some large crushers.

Now that the August is off the board, I have to wonder if these same entities are going to try the same game with the September.

My concern is that this game playing is going to move the needle firmly in favor of increased acreage going to beans in S. America at precisely the same time a huge harvest of beans is expected here. If that is the case, the supply of beans could expand quite rapidly driving prices even lower as end users lose the urgency to chase supplies and opt instead of buying hand to mouth as they wait for prices to work lower.

We'll see how this plays out in the days/weeks ahead.

The livestock markets appear to have experienced some heavy short covering today after having been beaten with the proverbial ugly stick. Even at that, the overall weakness across the energy complex, ( gasoline prices are down more than 8 cents a gallon as I type this ) has dragged the GSCI to a BRAND NEW LOW for the current year. As a matter of fact, the index has not been at these levels since  APRIL 2013! We are talking a 68 WEEK LOW! 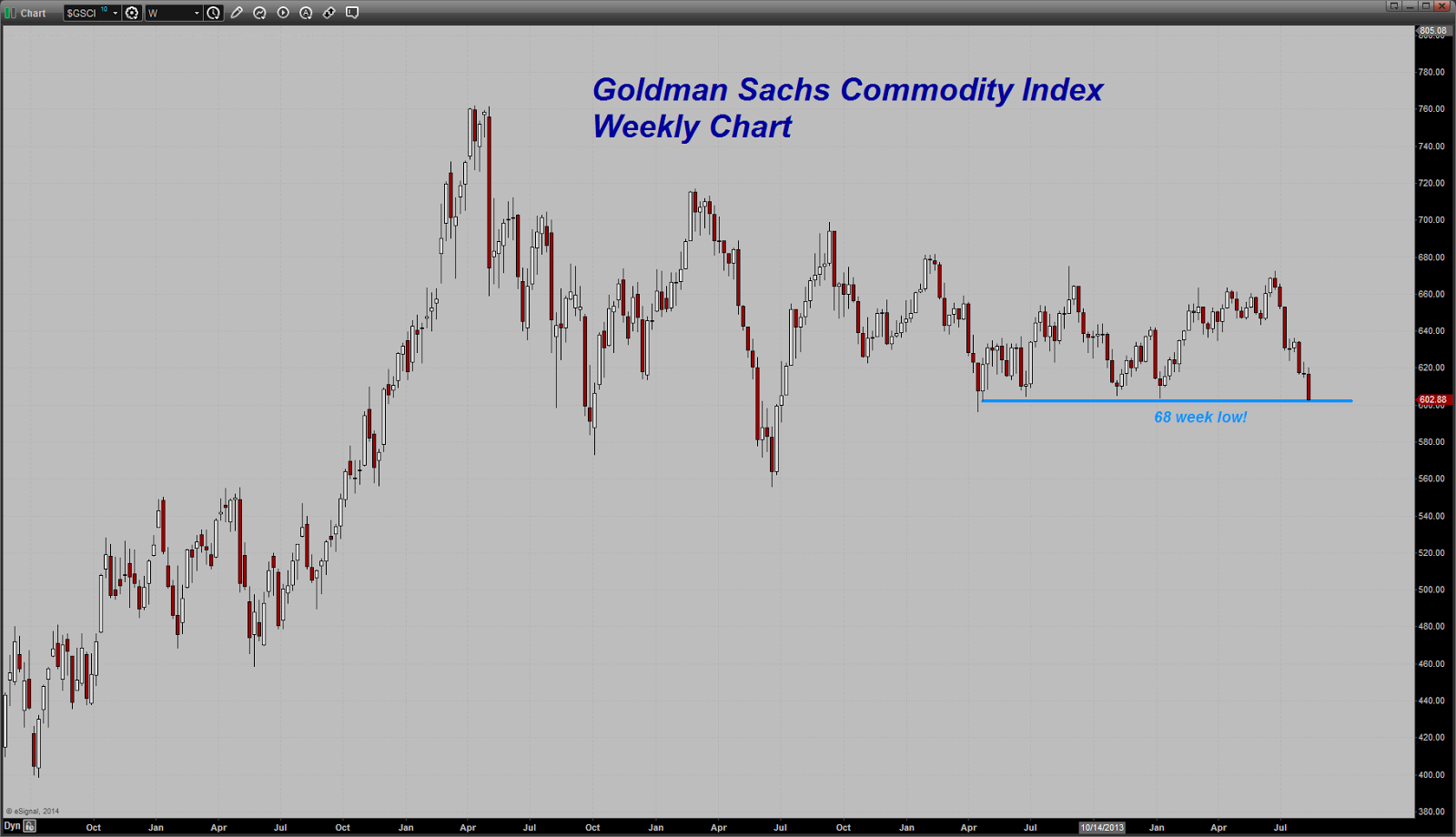 The US Dollar Index continues knocking on the door of that stubborn band of overhead chart resistance. It has thus far been unable to mount two, consecutive daily closes ABOVE that 8155 - 81.60 level but look like it might just be able to do it today. If so, one could expect to see the bulls try to push it out past 81.80 and accelerate it higher.
This is why I continue to be concerned over the future fortunes of gold. With the commodity sector swooning lower and with the Dollar firm and threatening an upside breakout, gold is going to encounter headwinds to its upward progress. 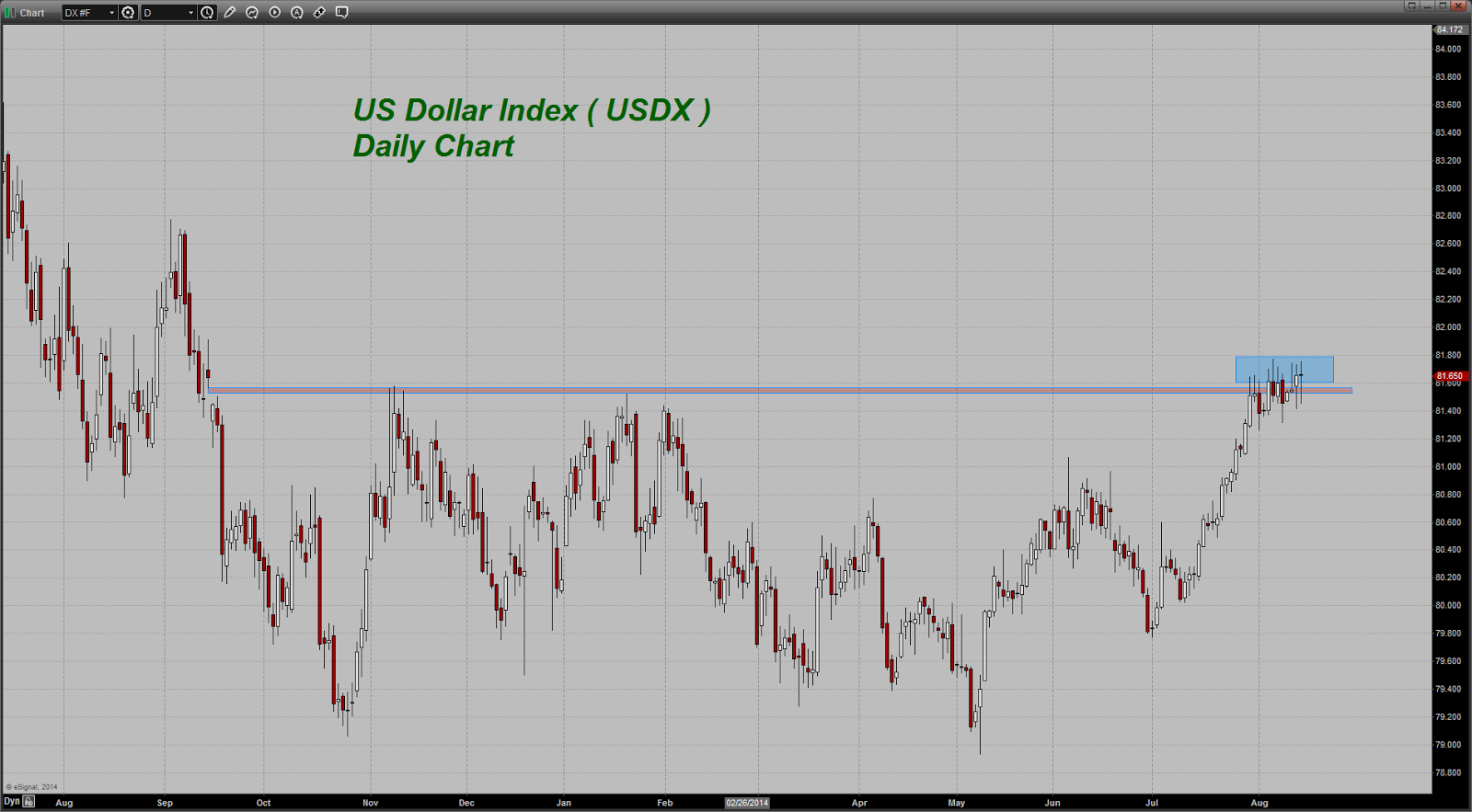 Not only that, but the level of nervousness seen in the equity markets is subsiding once more. Here is a  look at the VIX or the Volatility Index. I prefer to call it the Complacency Index.
It had been rising over fears/nervousness associated with the Ukrainian mess and other various geopolitical factors but has begun trailing back down once again. 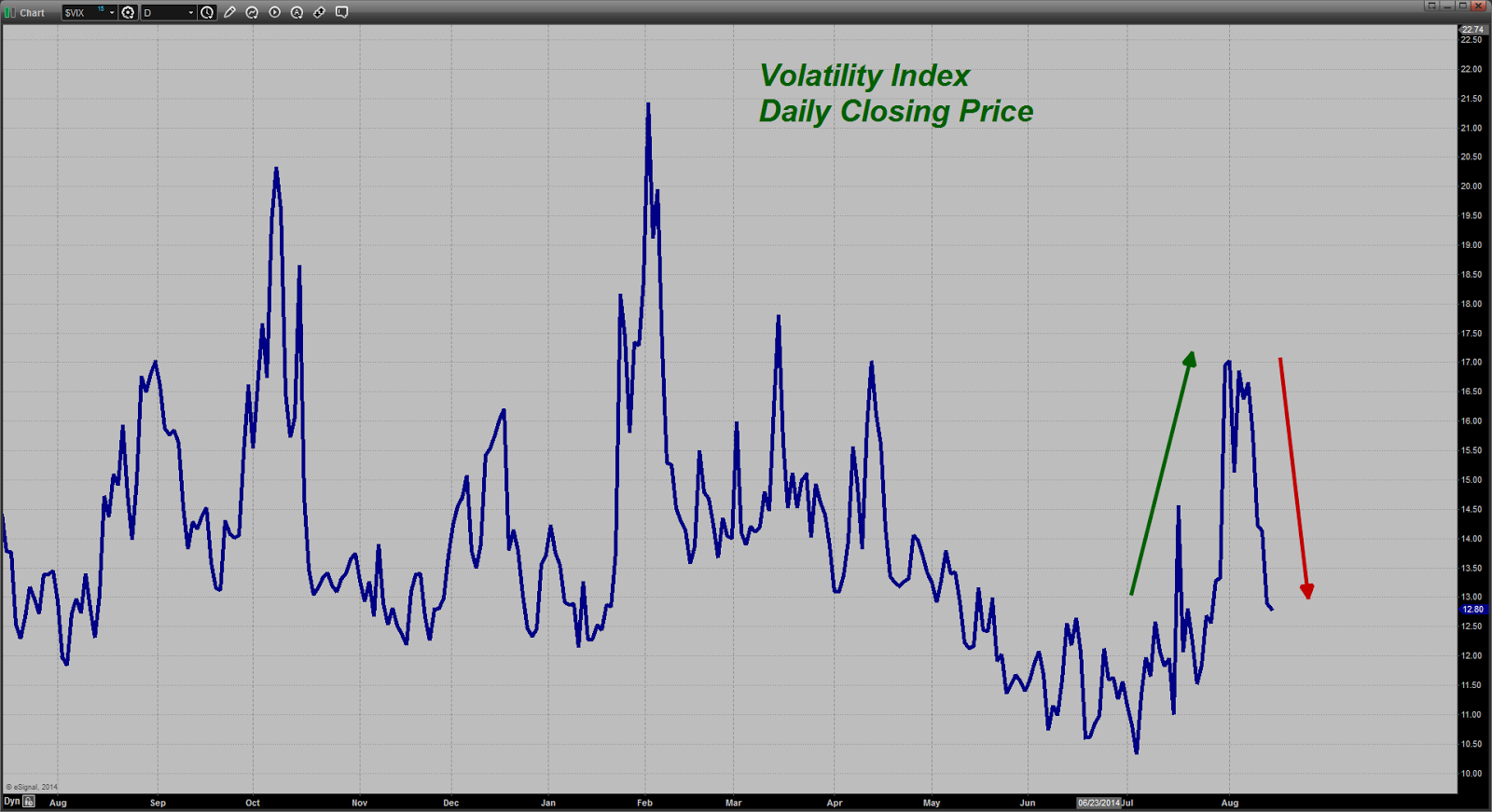 These are all factors which can be considered negative for gold. I mentioned the other day the drop off in reported GLD holdings which now bring the total level of gold held in that ETF to below last year's ending number. In other words, it is now down on the year.

In spite of these negative factors, the price of gold is holding well as are the mining shares, which seem to have found some strong sponsors. Gold however cannot manage to overcome the selling hitting near $1320.

From my perspective, gold is simply not a good trade right now. It is too much of a crap shoot. Chasing it higher given the above-mentioned negatives does not make sense while selling it aggressively is also not easy given the strength in the miners. It is in a sort of no-man's land at the moment and that range bound chart pattern is evidence of this. I for one would prefer to see it break out convincingly one way or the other. For the time being, short-term oriented traders can play that range trade.

Also, along this line, look at the Gold Volatility Index - it is moving lower once again indicating the current sentiment that the range trade is more of what is in store for gold rather than any sort of sharp breakout either way. 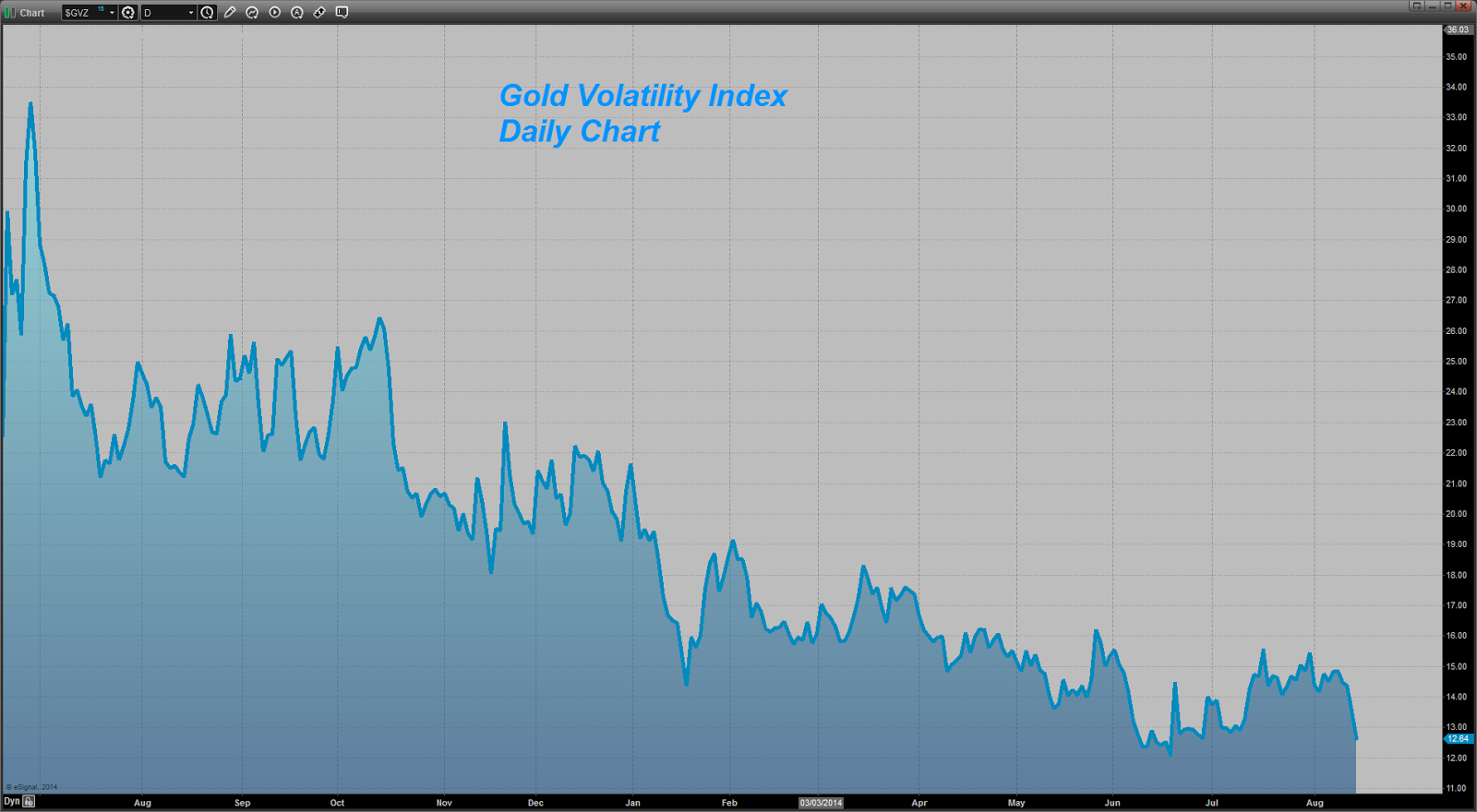 Take a look at one more chart... unleaded gasoline. I for one am quite happy to see this! 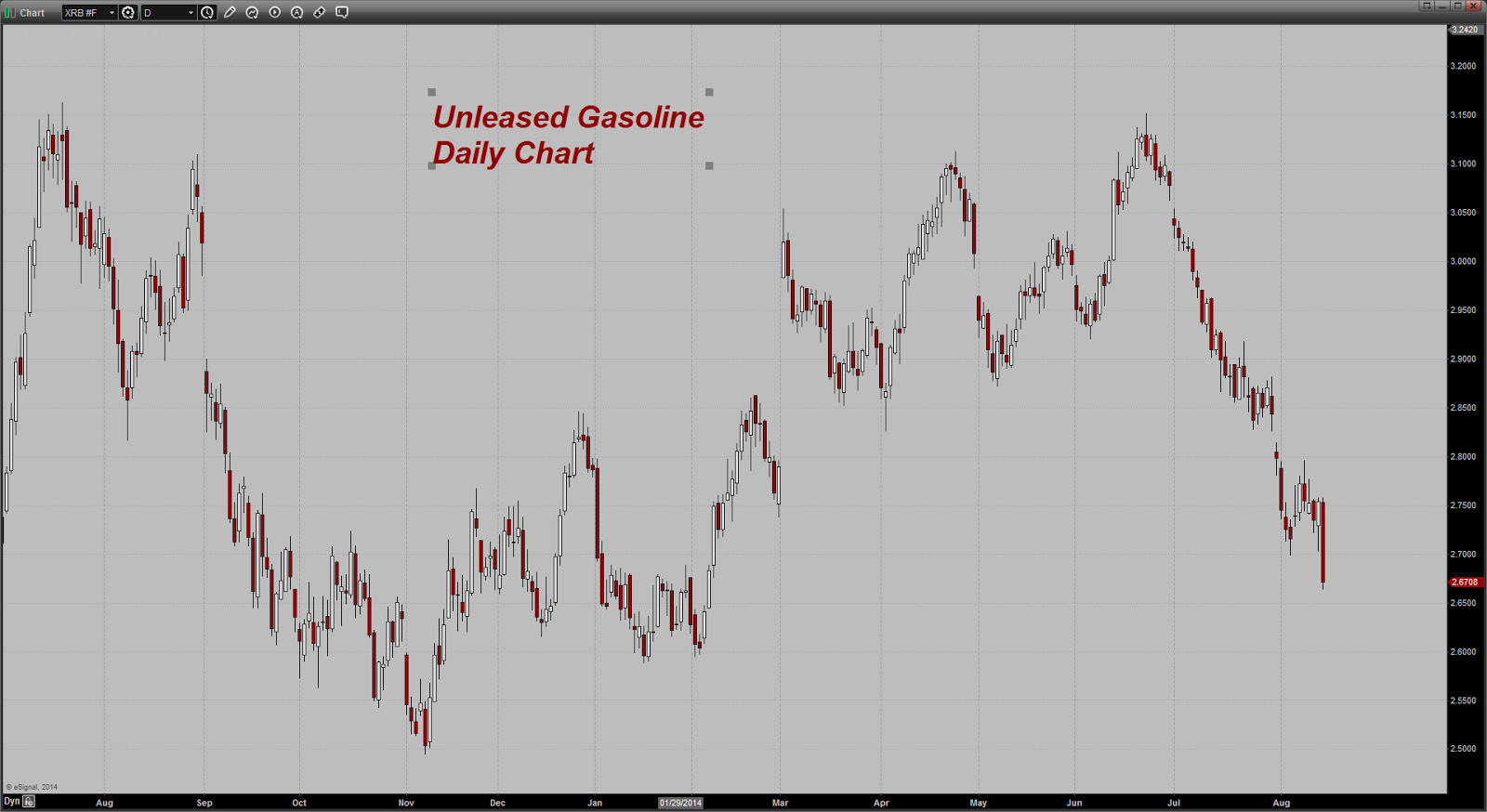