Gold continues with its lackluster performance of late since failing to extend its bounce past overhead resistance between $1475 - $1485.

With equity markets continuing to head vertically north, hedge funds are not interested in safe havens of any nature, be that gold or Treasuries. For that matter, they are not the least bit interested in mining equities either.

Sentiment towards gold among the Western investing community is horrible. It is strong Asian demand which is keeping this market supported. Had it not been for that, gold would never have managed to climb as high off that recent crash lower as it did. 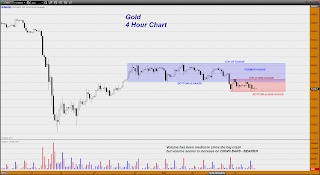 As mentioned in my post over the weekend, until investors get rattled
either by fears of inflation (judging from the TIPs spread they are no where near so doing) or until some event occurs which rattles their confidence in the Central Banks money creation theme, it is difficult to see sentiment shifting back towards gold among the hedge funds.

The commodity sector, in general, is continuing to move lower which is mind-boggling considering the extent to which the Central Banks have goosed the equity markets with their short-sighted bond buying programs and other easy money policies.  A thinking person would look at the given reasons for rallying stock prices and connect the dots with the idea being if economies were strong enough to engender a stock rally of this magnitude then surely demand for physical commodities, which normally accompany any period of true economic growth, would be rising, not falling as it currently is.

It all just confirms in my mind the disconnect from reality which is currently being seen in this equity phenomenon. For any of your Star Trek fans out there, it is like something that has been programmed into the ship's holographic program array and into which the crew could escape to live out their fantasies. In this case however, it is real enough in the sense that fortunes are being made chasing equities higher on Wall Street. This is a "sure bet" and Wall STreet loves a sure bet.

The result of this madness is that the  word, "RISK" has been rendered meaningless, a non-entity, a bizarre leftover from an ancient world of men by these paper money alchemists. Until it recaptures its meaning in the minds of men, I find it difficult to see why gold will mount any sort of SUSTAINED rally.

Generally speaking, hysterias of this nature end badly. I maintain that it will. Traders can chase stocks higher but investors, need to be extremely careful with this market. It is rising on air and nothing else of substance.

By the way, check out this chart of lumber - sure makes me wonder where the homebuilding industry is heading! 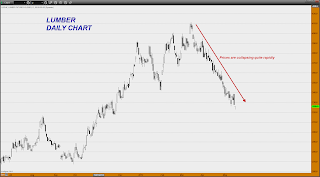