Based on the monthly chart, the S&P has rallied to precisely the 75% Fibonacci Retracement Level and has now failed at that point. One would then expect the market to drop lower and test the next retracement level (61.8%) which it did - and promptly failed there. Following that breach of support, the next move lower should then be expected to test the more significant 50% retracement level. Note that it has currently broken below that quite significantly. Bulls now have their back firmly to the wall and will need to perform here, or else.

If the market cannot rather quickly regain this level, which comes in near the 1126 level, technical analysis tells us that it should then fall down towards the 38.2% retracement located near 1018. Interesting enough, that level corresponds very closely with horizontal support located in that same general vicinity with a swing low right at 1000.

As we move forward, IF, the market were to fall below both the 38.2% level and the 1000 level, it would portend some very serious losses in the broad equity markets and set things up for a drop towards 900 - 896. 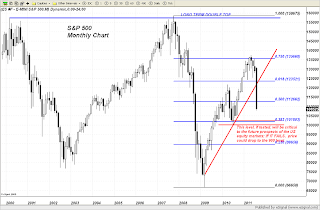 Posted by Trader Dan at 9:18 PM No comments:

Throughout most of the day, the mining shares were very strong moving higher in conjunction with gold bullion, and to a certain extent,  silver. AS the session moved into the afternoon hours however, the breach of 1150 in the S&P 500 was apparently too much too keep the money flows coming into the mining sector which then surrendered all of its gains and dipped slightly into negative territory.

It might be a good time to note that with crude oil moving in a totally different direction than gold, one of the major costs of mining companies, energy, is falling off while the price of their product, gold, is moving higher. That looks to me like an ingredient for even better profits moving forward.

Note the ratio chart below showing the extreme level to which the undervaluation of the mining sector is reaching. 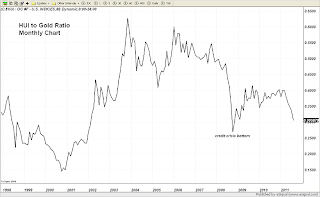 The bond market has voted and given its assessment of the S&P downgrade of US long term debt  -  investors are not only willing to buy and hold US Treasury debt but they are willing to buy and hold that debt at even lower rates of interest than going into the downgrade. Risk is trumping all right now and investors are running out of nearly everything out there except for gold and Treasuries. Even silver has been feeling the impact of risk aversion trades as it has surrendered a large part of its gains as the collapsing copper and equity markets are pulling the grey metal from its highs while safe haven bids are bringing it support.

One normally expects to see interest rates rise after a downgrade but such is the current environment that investors are rushing into cash and into gold. It would seem that gold is finally getting the due respect it deserves after being constantly harangued as "no safe haven" by far too many talking heads who confuse liquidity driven issues with fundamentals. I marvel at the obtuseness of some who just last week were trashing the metal for being "no safe haven" on a day in which equities were getting hit hard and investors were rushing to get liquid and meet margin calls. Never mind the fact that gold had been making one record high after another across a wide variety of currencies. Never mind that as the sovereign debt crisis in Euroland escalated, more and more buying of gold was occuring. All that mattered was we had a huge selloff in stocks last Thursday so out were trotted CNBC's "experts" on the gold market who pronounced it as "no safe haven" because it was being sold to meet margin calls.

Today, those nitwits are looking very stupid indeed because now the talk is that "gold might be the last safe haven available". Gee, what a surprise - 6,000 years as a currency finally does matter. My oh my what a difference a day or two can make. Let me guess - these same "experts" will now be trotted back out to tell us why gold is such a great safe haven - and they can do this without blushing!

Gold gapped higher from the get go last evening as it opened above strong resistance at $1,680 and never looked back. Anytime you see a "gap and go" above a strong chart resistance level, you know you have something impressive occuring. That is exactly what has happened in the gold market as it has left $1680 resistance in the dust and blown right through psychologically significant resistance at $1,700. As I write this, it has set a new record high of $1,721.90 and is up over $66. If global equity markets do not soon stop the bleeding, these $60 up days could soon become $100.

Further aiding the metal's upside progress is the long awaited divorce of the mining shares from the broader US equity markets. The HUI in particular is having a strong day, up 4.6% at 551 as I write this while the XAU is up 2.82% at 201.59. The HUI must get through last week's high up near 570 to have a shot at taking on critical chart resistance at 580 once again. If we get some further short covering from the hedge fund ratio spread trade, that should occur rather easily. That trade makes increasingly less sense as gold powers on towards one record high after another, especially given the already severe undervaluation of the gold shares in comparison to the metal itself. If they insist on doing a spread trade why not buy the miners and short the broader equity markets. That was has been a winner for more than a month now. If the hedge fund managers could wrap their mind around this trade, the miners would make new all time highs in short order. 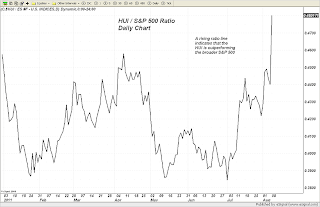 I think it is important to note the price action in the Continuous Commodity Index ( CCI ). Now that we have a few months of price action to observe we can get a sense of the shift in investor sentiment towards the overall sector. Back in March, when the earthquake and tsunami struck Japan, commodities were sold down as investors rushed out of risk. The thinking was that the blow would result in slower overall growth globally. Traders then reassessed that view and pushed prices back right up to the old high. Later in April, once the index was unable to push through the former peak in price and go on to make another high, technicians sold and fundamentalists built the case that the slowdown in global growth would lessen prospects for further gains for the sector. Since that time, price has been on a rather slow grind to the downside. Based on this chart, the case can be made from a technical standpoint that unless or until the sector pushes past 660, inflation fears are no longer foremost in traders' minds. The current thinking is that RECESSION is more likely than INFLATION. That view in commodities is being reinforced from the bond pits as well. 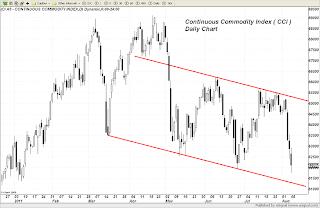 Gold is now in an acceleration phase as it continues moving with a new and steeper uptrending channel. Given the huge speculative flows into this market, it will remain quite volatile as traders pay increasing attention to any market moving news and react according to their interpretation of that news. What that means for those who hold the metal, is that they should expect large price swings on a day to day basis. Also look for a margin hike increase very soon coming out of the CME Group for the metal as it is precisely this sort of volatility that triggers such increases.
We have several levels of downside support should we get any sort of pullback or retracement in price. The first is $1,680, followed by $1,650 - $1,644 and then by $1,620.
Silver needs to get above $40 and stay there. It just cannot hold that level as it is unable to shrug off its industrial metal hat to the point where safe haven or monetary related flows can keep it elevated. Downside support in silver is last week's low near $37.50 and then $36. 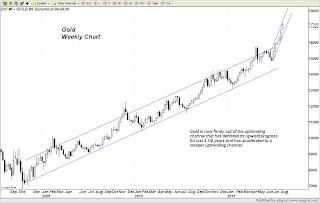 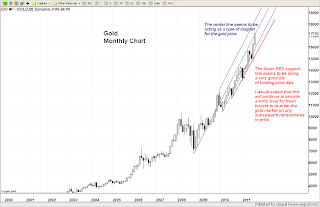