The Wall Street Journal is in exceptionally fine form in Tuesday's edition. The headline from the commentary says it all:


This is no small development. Although it does not reflect the view of the editors of the paper itself, since it is an editorial written by a Mr. Lehrman, of the Lehrman Institute, I find it extremely noteworthy that an article calling for a return to a gold standard would actually grace the pages of that prestigious leading financial newspaper. The WSJ is not a "Wild West" newspaper but is an establishment periodical, which is why I was quite surprised to see an article of this nature.

Perhaps the paper will find room to allow for some other writer to make a case against a gold convertibility statute, but for now this just goes to show that the debt crisis that is engulfing our nation is resulting in serious discussion about the role of gold in any future monetary system or in the current system.

My own personal view is that the first nation to do so will end up being the winner as its currency will be the strongest, assuming of course it takes the necessary steps to get its financial house in order.

The author correctly notes the following:

Unrestricted convertibility of the dollar to gold at the statutory price restricts Federal Reserve creation of excess dollars and the inflation caused by Fed financing of the deficit".

I urge you to read the entire commentary which can be found here.


Also, additional information about the Lehrman Institute can be found here:


Also, while you are at the Wall Street Journal's site, make a special point of reading the exceptionally fine commentary entitled:

Hat's off to the editors of the Journal for presenting such excellent articles on their site. Now if only we had political leaders who understood these things and who were true statesmen willing to heed the advice offered here. Perhaps our nation would have some hope that we can still rise out of the ash heap being created by our current crop of leaders who cannot stop spending this nation to its ruin and who indeed allow the Federal Reserve to deliberately debauch and thus ruin our national heritage, the Dollar.

After the extreme volatility in silver, it comes as no surprise to see the CMEGroup raise margin requirements for trading silver yet again.

Some of what you are witnessing this evening in silver is due to this change being instituted as brokers are calling clients advising them of the coming change at the end of trading tomorrow (Tuesday).

Emini silver and miNY silver futures are also affected by this change.

Hedgers' margin requirements are being increased to $9,500 from $8,700. Wouldn't it be nice to get hedger margins when the truth is that much of what occurs at the Comex is not hedging but is pure speculation on the part of the perma bear firms.
Posted by Trader Dan at 9:25 PM 2 comments: 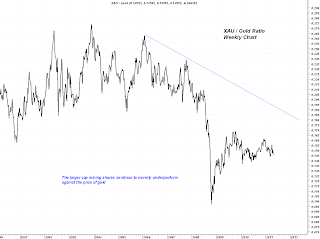 The chart shows a very large volume spike on the big down candle suggesting the presence of long liquidation in a large way as many bulls rang the register once it appeared that the market was not going to take out $50. It is however a bit tricky reading this because we are also now into rollover activity where traders begin moving positions out of the May contract, which will soon be going into delivery, and into the July, which will then become the most active contract. Some of that activity tends to distort the overall volume readings. Nonetheless, the big volume down day is technically significant.

Open interest in the July is now larger than the May by the way so I will soon be shifting my analysis to that contract once its volume exceeds that of the May.

I should note two significant occurrences here. First of all, there STILL IS NOT SHORT COVERING on a large scale occuring in silver based on the continued increases in open interest as the price moves higher. There may be a short in trouble but there seems to be more than enough NEW SHORTS who are willing to stand in front of this market who are not afraid of either adding on to their existing shorts or putting on a fresh new short position. I continue to find that remarkable given the size of the paper losses that the bears have been enduring. The entity involved seems to have an unlimited wallet.

The second occurrence is that silver has not yet exceeded its all time high made way back in 1979 even after its spike higher in overnight trading in Asia on Sunday night.

We now need to see where the market will base after this big move up and then back down. The gap from overnight was filled in New York trading, less than 24 hours after it was formed. That is too soon to be a breakaway gap meaning it looks more like an exhaustion gap. I should point out however that generally, exhaustion gaps are preceded by breakaway gaps. We have not had even one of those occur this year.

The way I am reading this is that on the daily chart we show a spinning top formation meaning that a temporary top is in the silver market but since I have not seen any short covering of significance over the last week  and since there was no breakaway gap evident on the way up, I am extremely hesitant to say this move is over to the upside or that silver will now collapse as some suggest is what normally occurs after a parabolic move.

We can definitely set back some from here but I am more inclined to look for the market to establish a new base of support instead of collapsing as some might be suggesting. What we will need to do is to allow the market to show us where this support will emerge. Currently the chart shows initial support near $46 followed by a band near $44.00 - $43.50. Let's see how things go from here.

If it is going to renew its move higher, it will need to clear $50 and hold that level on any move back.

One thing is for certain however - if the Dollar takes out 74 and cannot recover that level, silver, and gold, are both going back up. 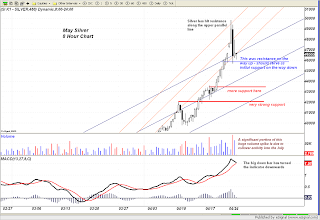 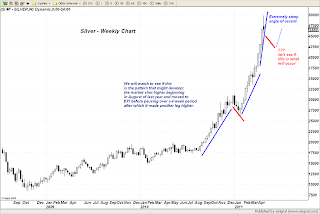 Any questions as to why Gasoline is over $4.00 and rising

Don't worry however - Obama is going to launch a task force to get to the bottom of these high gasoline prices which are no doubt entirely the cause of evil speculators.

There are many reasons for this but in my view the primary causes are the fools in Washington DC who spent us into the toilet using borrowed money to do so and who then had their puppet at the Federal Reserve print gazillions of Dollars into existence thereby assuring its debasement.

The combination assures us that the next two generations will be saddled with a debt burden, not of their own making, which will never be repaid in its original form.

I might also add the role of a large portion of the citizenry who seem to think that they are entitled to the fruits of the labors of others and who continue to vote for the very same type of politicians who are ensuring our decline.

Then again, you can also thank those who made it so difficult to own and operate a business here in the US between excessive regulation and overbearing bureaucrats that entrepreneurs threw up their hands in disgust and just moved their operations overseas.

Commentary: China’s economy will surpass the U.S. in 2016

You can read the entire story here ( it will undoubtedly deeply grieve you if you love this nation) :

http://www.marketwatch.com/story/imf-bombshell-age-of-america-about-to-end-2011-04-25?link=MW_home_latest_news
Posted by Trader Dan at 7:35 AM No comments: