What a difference one day can apparently make in the minds of traders! Yesterday, following an initial sharp downside knee jerk reaction to the lack of an imminent QE3, Gold (and Silver) both rebounded well off their lows as traders became convinced that the Fed had surely left the door open to a round of QE should there be one more month of disappointing payrolls numbers.

That sentiment sure proved fleeting, not only in the precious metals markets, but across the entire spectrum of commodities, as well as the bond markets.

Die-hard equity bulls, who were consoling themselves that if they did not get their dearly beloved and eagerly anticipated round of drugs yesterday, would surely get it from their dope-dealing masters at the Fed soon, were throwing away everything that they had purchased yesterday at a big, fat, whopping loss. As mentioned in my piece on King World News, the equity markets DIED a long time ago as far as being any source of efficient allocation of precious capital. The entire structure is now being GAMED. Instead of XBOX or NINTENDO, (the younger kids and early adult are playing those), we have GAMERS trying to time the Fed and any other official monetary sector authorities. INVESTING is DEAD. What lives is who is fastest on the power key combination of their "ENTER" button to slam orders down the wires into the exchanges.

Whoops, another stumbling block - numbers out of China this AM reinforced the slowing global economy theme. Then, as if that were not enough, the Philly Fed readings confirmed more of the same. Further piling on were former Fed Chairman Alan Greenspan's comments that the economy  was "very sluggish".

Bonds took back most of yesterday's losses with the yield on the Ten Year dropping back down towards the 1.6 level.

In short, DEFLATION was the theme of today's session as traders simply do not see any source of inflationary pressures without another quick round of liquidity injections, compliments of the Fed. That means that they are going to be selling commodities. Just take a look at crude oil which is imploding as it has now broken down through the bottom of chart support. 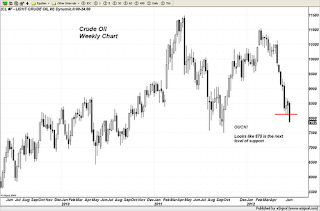 Silver is in serious trouble based on its technical chart. It MUST HOLD ABOVE THE RED SUPPORT LEVEL SHOWN or it is heading to $24.50 or even lower to $24 unless the bulls perform immediately. As you can see, going all the way back to September of last year, every time the metal has come down towards $26, it has not stayed there long. Buyers have always shown up. THose buyers had better be here. 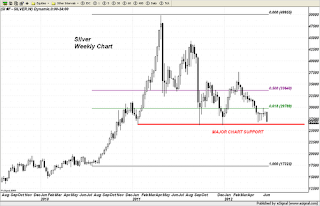 The HUI Has further reinforced the 460 level as that level which MUST BE TAKEN OUT if the shares are going to sustain any sort of upward trending move. They are currently sitting right on the next level of chart support. If the buyers do not show up later today and tomorrow, there is a good chance that we will see the index drop to the next red line further down. 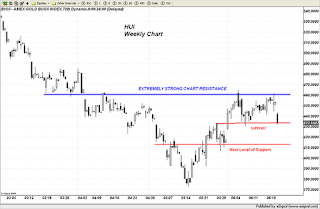 Gold has failed to break through the shorter term downtrending line noted on the chart that formed within the recent congestion zone. It has also failed to sustain its footing above psychological support at $1600. It now looks as it it is going to be up to the Eastern Central Banks to rescue the metal from hedge fund computer algorithms as it moves back down to its solid support zone noted on the chart. 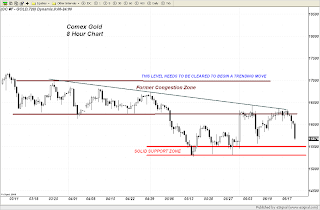