Bloomberg is reporting this evening the latest in China's battle against inflation, in which it appears to be on the losing side for the time being.

Keep in mind that the yearly deposit rate for bank accounts was raised 25 basis points a couple of weeks or so ago to 3%. Combine that with this story and you can see why gold demand from China will remain strong. The reason - REAL rates of return on savings is currently negative. Such an environment is always friendly towards gold.

I also note that apparently the Chinese leaders are taking a page out of the US song book when it comes to playing games with their official inflation statistics.

"Food prices are too high". No problem - just drop some of them out of the inflation index. "There you go - problem solve-ed. Next!"

The Bureau of Statistics ended up cutting the weighting of food by 2.21 percentage points. As the reader is probably aware, they have been rising at an alarming clip. Even at that, it was reported that food prices rose by 10.3% from January a year ago. That compares to last month which showed a rise from 9.6% compared to a year earlier.

I think they need to hire a few of our people from the Bureau of Labor Statistics (BLS) to tutor them on hedonic indexing and rental equivalency. Hey guys - if you're gonna do this, then do it right!

We will continue to monitor this situation as it will have a significant impact on gold demand from that region.

Inflation exceeded the government’s 2011 target for a fourth straight month in China as prices excluding food rose the most in at least six years, escalating pressure on the central bank to keep raising interest rates.
Consumer prices rose 4.9 percent last month from a year earlier, the statistics bureau said in a statement on its website today. That compared with a 4.6 percent gain in December and the median forecast of 5.4 percent in a Bloomberg News survey of 27 economists. Producer-price inflation accelerated to 6.6 percent from 5.9 percent in December.
A drought in wheat-growing regions, rising global commodity prices and a 53 percent increase in money supply in two years are adding to price pressures in the fastest-growing major economy. Officials may front load policy tightening in the first half of the year as inflation remains elevated, according to economists from JPMorgan Chase & Co. and Morgan Stanley.

There is a nice lead in piece that Jesse wrote to the video clip which is at the bottom of the post.

I think you will enjoy it as much as I did. I am still laughing!

It was just a matter of a couple of weeks or so ago when the rating agency, S&P, downgraded Japanese government debt from 'AA' to 'AA-' citing its  worsening debt situation and lack of " a coherent strategy" to deal with has now become a chronic problem that threatens to eat like a cancer at any future growth.

The OECD now projects that at some point during this year Japan's total national debt will hit 204% of its entire GDP. Another way of stating is to say that it would require more than 2 entire years of every single bit of economic activity in that nation just to pay the debt.

We learn today that the US has now reached yet another threshold right along the same line. The headline reads:

Here is the full story. Read it and weep for your children and grandchildren.

Not to worry however, since our financial masters tell us that all these fears are but a tempest in a teapot.

President Obama projects that the gross federal debt will top $15 trillion this year, officially equalling the size of the entire U.S. economy, and will jump to nearly $21 trillion in five years’ time.
Amid the other staggering numbers in the budget Mr. Obama sent to Congress on Monday, the debt stands out — both because Congress will need to vote to raise the debt limit later this year, and because the numbers are so large.
Mr. Obama‘s budget said 2011 will see the biggest one-year jump in debt in history, or nearly $2 trillion in a single year. And the administration says it will reach $15.476 trillion by Sept. 30, the end of the fiscal year, to reach 102.6 percent of gross domestic product (GDP) — the first time since World War II that dubious figure has been reached.
In one often-cited study, two economists have argued that when gross debt passes 90 percent it hinders overall economic growth.
Posted by Trader Dan at 2:29 PM 3 comments: 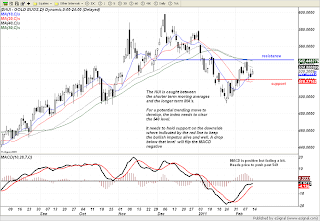 Posted by Trader Dan at 1:30 PM No comments: 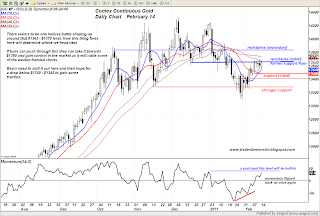 Silver has been working back towards its recent all time high in Euro terms and is within less than a Euro from taking that out. It did not stay down below 20 Euros for very long. 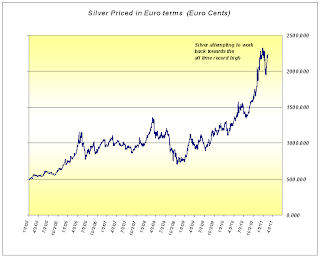 Posted by Trader Dan at 8:54 AM No comments:

Silver is starting off the week on a very strong note and has pushed back firmly above $30. Bulls can seize control of this market if they can now push past this line of defense erected by the bears near the $30.50 level. Note the battle taking place at that line. Bulls pushed past the barrier earlier in the session but price fell back below it. However a fresh push is again underway to see if they can extend their gains.

Volume on the upthrusts is strong indicating the presence of quality buying. Sellers are trying to dig in here. 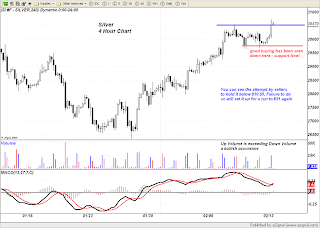