Common Sense Perverted in the Bastion of Leftism

Take a look at the following story if you have enough composure to contain the sense of revulsion and outrage that should affect all decent, caring human beings.

For his act of compassion and concern, the center of the politically correct universe will make this poor good Samaritan's life a living hell with their damned idiotic runamok political correctness.

Keep in mind that it was the District of Columbia vs. Keller in the Supreme Court case of 2008 which finally determined that the 2nd amendment right to keep and bear arms was an INDIVIDUAL RIGHT. It was DC's asinine anti-gun policies that finally brought people to their senses about what was happening to their consitutional rights.

Gold Shoved Back Down

Yesterday I mentioned that gold had stalled out at its 50 day moving average, which just so happens to come in very near the psychological resistance level of $1700. Today it was knocked lower and hit its 200 day moving average on the downside which has stopped its descent, for now. 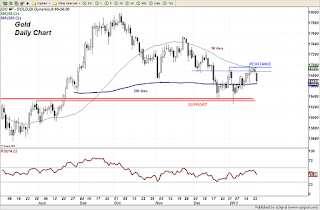 There looks to me to be a couple of things going on here. The first is a technical failure with its inability to get a handle of $17" in front of it. That must occur for momentum based buying to come in, buying which I might add is necessary if this thing is going to to anything to excite the bulls. The Swap Dealers and Bullion Banks are selling very heavily at this level and are absorbing all of the bids coming into the market.

The second is that I get the distinct feeling that what we are seeing is disenchanted short term oriented traders who are are giving up in disgust at gold's lackluster performance and are looking for more fertile grounds elsewhere. And why should they not at this point seeing that it is the equity markets that are attracting all the hot money flows.

Yet again we see the S&P 500 just made a FIVE YEAR high! That is where the action is and that is where the money flows are going to go. Bernanke and his merry crew of modern day alchemists have gotten precisely what they are looking for. Even the bond market refuses to break sharply lower with interest rates hovering stubbornly near the 1.84% level on the 10 Year.

The VIX moved a bit higher today, surprisingly so but then again, maybe the fact that the S&P stop less than 3 points away from the 1500 level has even rattled the cages of even the most die-hard equity perma-bulls. That index has already risen 5% since the end of last year and the month of January is not even over yet.

Back to gold however, the RSI has once again retreated lower failing to best the 60 level indicating that the gold market continues to be stuck in a broad trading range bounded by $1630-$1640 on the bottom and $1697-$1700 on the top. Volatility in the gold option pit is nearly comatose indicating the absence of any speculative fever whatsoever. Quiet markets like this make me nervous because they can make big moves in either direction at any time. With gold, the tendency is to make the big move lower when the gold shares continue reeking to high heaven. The HUI feel through its floor of support at 420 as if it were non-existent.

AS I have written previously, one can make all manner of bullish arguments for the gold shares but until the LARGER INVESTMENT COMMUNITY actually subscribes to that view and begins putting their money into the sector, nothing is going to happen. Repeat after me - SPECULATORS DRIVE MARKETS and without speculators willing to chase prices higher, stocks go nowhere.

Case in point - compare the S&P 500 with the HUI and you will see where the speculative money is going... I was telling a friend the other day that gold share investors would have been better off doing absolutely nothing after the credit crisis erupted in 2008 and leaving all of their money in a broad equity index mutual fund rather than actually attempting to understand what was happening to our financial system. 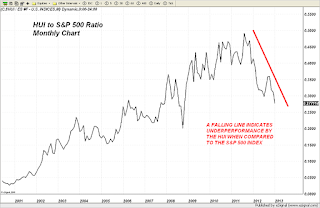 I guess that either group cannot complain in one sense - both the S&P 500 and the HUI are right back to where they were in 2008. So consider it as FIVE LONG WASTED YEARS. Motto - Drink heavily and deeply and do nothing but watch reality shows with the rest of the population.

The dumbed-down citizenry of this nation whom still do this day have no clue as to what actually happened with the economic system are no worse off than those of us who do know! Ah yes, ignorance is indeed bliss it would seem.

This is yet another important reason to lean to read price charts to move into and out of markets when the signals inform you. It will save a lot of frustation not to mention make it much more profitable for you as an investor.

This having been said, the next level of chart support on the HUI does not come in until near 400. Barring any surprises, that is more than likely where the index is heading. It had better hold there and especially above 380 for should it not, there is no support on the chart until 342 or so.

The Silver chart looks a little better than the gold chart right now but it failed to take out $32.50, that critical resistance level we have been talking about on the KWN WEEKLY METALS WRAP and is now retreating. There is a band of support (former resistance) that can be seen near today's session low which will need to hold to prevent the metal from dropping back to $31. 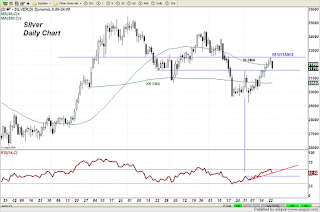 The RSI is still in an uptrend but it, just like with gold, failed to extend beyond the 60 level. Translation - while the market bias is still friendly, it remains mired within a broader range bounded by $32.50 on the top and supported near $30 on the bottom. For silver to get anything going to the upside it must first take out yesterday's high near $32.50 and preferably get a close above $33.