After questioning last week where the Fed's QE3 had gone, it seems as if we got an answer this week. This afternoon's report on the Fed Balance Sheet shows a sharp increase in Mortgage-Backed Securities holdings on their Balance Sheet, $37 Billion to be exact.

Keep in mind that the Fed had announced monthly purchases of $40 billion in MBS debt each and every month so it looks like they just made a big chunk of that for November.

Based on what I am seeing in the US equity markets, that $40 billion is not going to do much good as the stock market continues reeling from the election results, the upcoming fiscal cliff and the woes in the Euro Zone. 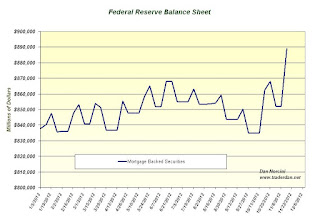 Gold Lower but Holding Above Support

Considering what looks more like a non-stop avalanche of selling in the mining sector, the yellow metal is holding relatively well. It has bounced off the first level of support shown on the price chart that comes in very near to the $1700 level.

Failure to remain above this level will allow the market to move lower towards the $1680 region where it can be expected to find some buying support.

To get the least bit of excitement going, gold will have to clear $1740 and remain above that level before it rattles anyone other than the most short-term bears.

Today, a story out of the financial press indicated that demand for Gold had fallen somewhat over the 3rd quarter. The World Gold Council indicated a drop of 11% over the same period last year. That seemed to spook some buyers. Throw in the fact that crude oil was lower, in spite of the simmering tensions in Israel (crude stocks are building significantly due to the pathetic condition of the economy), and any fears of inflation took a back seat today.

It also did not help the cause of the metal with the S&P 500 continuing to reel under selling pressure. Today was not a good day for Apple and that set the tone for most of the market.

We'll see how the metal closes out the week tomorrow. 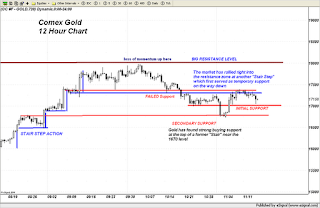 
Ron Paul: The Founders Believed in Secession
“Secession is what we did when we left England, it was a wonderful thing”


Paul Joseph Watson
Infowars.com
November 15, 2012
Congressman Ron Paul reacted to the secessionist movement sweeping America today by reminding people that the United States seceded from the British empire, while slamming those who suggested their fellow Americans should be deported merely for talking about the idea.