The S&P 500 continues to act like a market wants to break down much more sharply than it has hitherto done before. Its trip back to the 1400 level this week did not last very long as it met up with some rather heavy selling; selling that appears to be of a nature of one that is now looking to sell rallies rather than buy dips.

To confirm at least some sort of short term top in this market, I would need to see this thing close stronlgy below the 1350 level. That level held it in check back in February of this year so a  good close below it would tell us that even the longs are getting tired of holding this market higher.

Notice how the MACD indicator shows a market that has been basically GRINDING higher rather than one that has been moving strongly higher on good momentum. It is almost as if no one believes this thing should be where it is and yet it has kept pushing up.

Upside Momentum has now declined notably with the indicator barely registering above the ZERO level before it is now threatening to roll back over again. 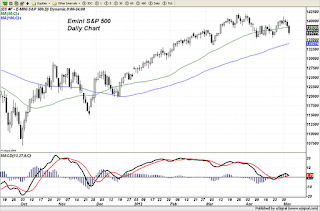 If the Fed and the boyz are going to act to prop it up, they had better hurry because it has all the makings of a market that could make a very sharp downside move.

Keep in mind that the level of the US equity markets have now become "national security" issues as far as the monetary authorities are concerned. While they are high-fiving themselves over what they have managed to pull off in the commodity sector and in the Treasury markets where interest rates continue to plummet (GOOD - the US government can borrow even more money and pay next to nothing to the chumps that lend money to it), they no doubt are keenly watching the equity market charts.

Take a look at the weekly chart where the indicator is generating its first sell signal since early last year. 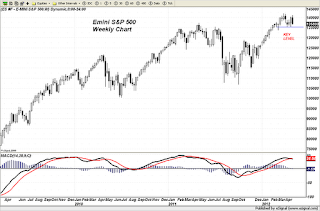 Today's pathetic payrolls number brought on more of the risk aversion or "slowing growth" trades with the result that it has now sent the commodity sector down to levels last seen in September 2010.

The 50 week moving average is coming perilously close to crossing down below the 100 week, further confirming the downward trend. If the Fed indeed was hoping to see commodity prices weaken to avoid the fallout from their little episode of money creation, so far they have gotten their wish.

The problem they have however is if stock prices continue to swoon lower, which they DO NOT WANT. If they are required to resuscitate equities by engaging in another round of QE, they certainly have room do so once again as far as the price of hard assets go. 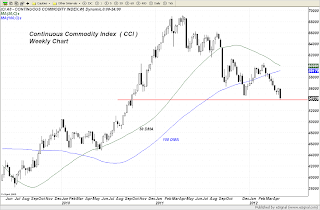 On the longer term monthly chart the index has now decidedly fallen below both median lines as well as violated the 38.2% Fibonacci retracement level of the rally off the 2008 bottom, a bottom formed when the first round of QE came our way. From a purely technical chart perspective, there is no chart support until until the 50% or halfway point of the entire rally from that same 2008 low to the early 2011 high. That level does not come in until close to the 507 level. 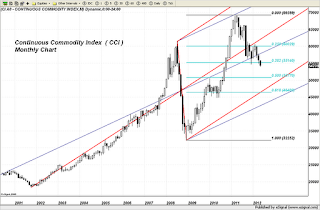 Note even in spite of the current weak technical posture of the sector, the index still remains in a decided uptrend as the chart pattern is a series of higher highs and higher lows as you move from left to right.

While wholesale prices of the commodity sector as a whole are moving lower, they are still much higher than they were a mere 4 years ago; something to keep in mind whenever the Fed and the feds parrot the nonsense to us that inflation pressures are tame.

Today's payrolls number was just as rotten, if not more so, than most traders and analysts had been expecting. The numbers coming out of the private firms were indicating this and they were very accurate. The problem is that the jobs number was even worse than nearly anyone had anticipated so we did get a very strong reaction in the equity markets with bulls running to the hills sending up smoke signals (this one is for that famous native American running for the Senate in Mass.)  for Mr. Bernanke and company to come and save them. Alas, Mr. Bernanke must have been over sipping some latte at Starbucks as he was no where to be found.

Gold reacted very well to all this partly because the news has traders convinced that this is another notch in the pole adding up to pushing the Fed into another round of bond purchases, aka, QE, and partly because of uncertainty over the upcoming elections in France. How that turns out could impact monetary policy over there.

Also, when one considers the fact that the CCI (Continuous Commodity Index) plummeted lower today with crude oil and gasoline getting whacked, to see gold and silver for that matter, moving higher is encouraging.

It looks to me like they are trying to drive down the price of gasoline to prop up Mr. Obama's pathetic poll numbers. Gasoline futures tend to peak in May anyway but I do find it noteworthy that the entire commodity sector as a whole is pushing relentlessly lower. This gives the doves at the FOMC plenty of ammunition in advocating more stimulus.

The HUI managed to claw its way back above technical chart support at the 420 level as it is bucking the trend of lower equities today. I would feel more confident about a final bottom being forged in these shares if the index could get back above 440, particularly after such a spike lower and sharp rebound as it has so far done today. See yesterday's post as a reminder of just how undervalued these gold shares are in relation to bullion... 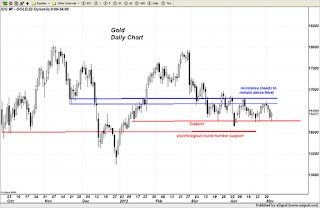 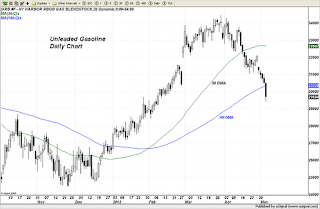