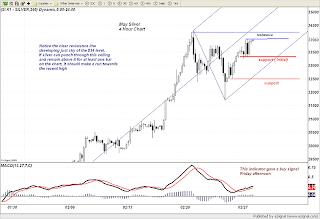 US Treasury Revises data of Foreign Holders of Treasury Debt

Once a year the US Treasury Department revises its data showing the foreign holders of US Treasuries. As explained here on the site previously, when Treasury debt is purchased by foreign entities, the sale is "booked" in the country of the transaction, not the country of origin.

As a general rule of thumb, the revisions are not usually not that significant except in the case of China, which for the past few years has conducted a large portion of its Treasury purchases through London financial centers. The result has been that when the revision takes place and the Treasury Department releases its data to reflect the country in which the actual debt is now owned, China has seen a rather large jump in its holdings at the expense of the UK, which sees a corresponding decrease in its reported holdings.

Today's revision by Treasury showed exactly this same pattern as China ended up with a reported increase of $268.4 billion in debt in the month of June 2010. From that month forward, their holdings either increased or decreased but it did so starting from a higher base.

I have updated my data to reflect these revisions and the charts as well that I have been using to provide a graphical view of all this. These new charts are presented below for your convenience.

Note, that after the revision, the gulf between the total reported holdings of China and those holdings now on the Federal Reserve's balance sheet has shrunk considerably but the fact is that the Fed is still the largest holder of US Treasury debt on the planet thanks to its QE program. 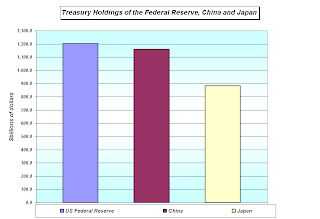 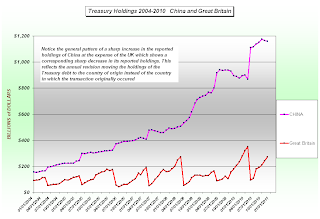 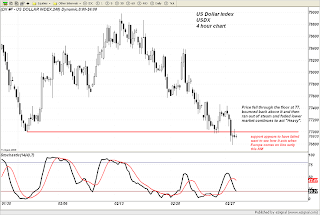 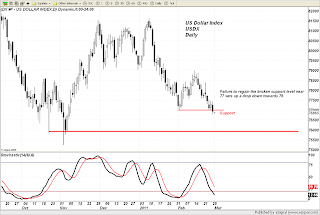 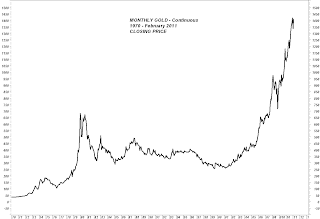 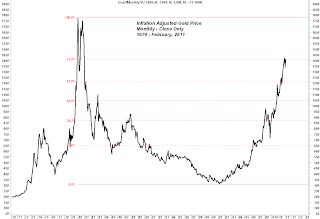 Strength across the broad commodity sector has lifted the CCI to yet again another new all time high. Seeing that it is the end of February, we have what now amounts to a new all time high closing price on the daily, weekly and monthly charts.

This continues to occur across a backdrop of a weaker Dollar and a soaring stock market. The Fed of course will continue denying that there is any connection whatsoever with these developments and its QE policies, but the charts tell a different story.

Bernanke and company wanted to produce inflation to stave off what they view as the more dangerous deflationary pressures. They got what they wanted. 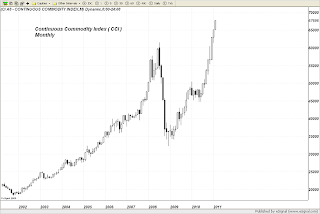 Meanwhile the bond market remains in its "See no inflation" problems mind set choosing to instead view rising energy prices from a deflationary standpoint rather than an inflationary one.
It does however appear to be stalling out a bit in its recent rise as traders sort out the implications of a move that has gone nearly straight up for the last three weeks. 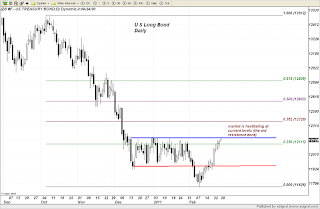 The bonds and the equity markets cannot have their cake and eat it too. If the spike higher in crude oil and the liquid energies is going to be viewed as a sort of tax on the economy and work to slow things down, bonds will move higher as they are currently doing. If however, that is true and higher energy costs are acting as a drag on the economy, then the equity markets should not be moving higher based on the "improving economy" theme. That theme did not include crude oil and gasoline prices rising to current levels.
There is a complete contradiction between the movements in the bond market and those of the equity markets.
In both cases however, it is liquidity injections both into the equities and the bonds that have created the utter contradiction as the Fed's involvement in rigging the interest rate markets have created another distortion that will have to be dealt with.
Posted by Trader Dan at 1:02 PM 10 comments:

See the chart for some comments on the price action.

Also, Friday's open interest revealed that reluctance or lack of conviction on the part of the bulls that I noted. The reduction in open interest with the market pushing up against the $1410 level but failing to muster sufficient strength to take it out shows the hesistation on the part of the bulls to go after the bullion bank offers in a more vigorous fashion. Instead, they looked at the roadblock and decided that coming in front of the weekend, they might as well just lighten up a bit and come back and see what the market was going to give them come Sunday evening in Asian trade.

The battle lines have been drawn on the charts as the bullion banks will commit great resources to blocking a move past $1420. They know that such an event would trigger an immediate run to the all time high near $1432.

The bulls need to hold it above $1400 on any dip lower in price to prevent a move back towards $1390. They must also waste no time in pushing back against the Bullion Banks capping effort  if they are going to prevent some of their more fickle comrades from continued long liquidation as there is a serious attempt here by the bears to form a double top on the shorter term price charts.

The Dollar dropping below critical support at 77 level on the USDX gave gold a strong lift but it has recaptured that support level once again and by so doing, emboldened the gold bears. One can see the movement in the Dollar and the corresponding movement in the metal by observing the tick by tick price action.

See the technical analysis of the US Dollar that I posted over the weekend. The Dollar is trying to bottom here but if the bulls there cannot hold it above the 77 level as it goes into the closing period, it is very probable that the greenback is going to move down to 76. It just looks heavy. The bulls now have their back to the wall; if they fail to perform, things could get ugly in the Dollar in a real hurry. 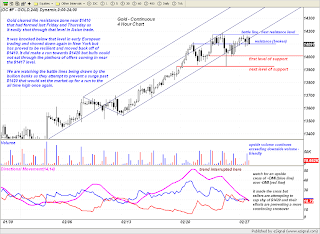 If there is going to be a short squeeze on the March, I would think that we should not see any further sharp reductions in that contract. If the specs keep bailing out at the present rate, any fireworks will have to wait until at least May unless of course someone wants to play the very thinly traded April contract. At this point I would have to say that the prospects of a squeeze in the nearby are diminishing.

In watching the spread between the March and the May, the market is currently out of backwardation by about 2 cents or so.

If the longs want the silver badly enough they will force the March to a premium back over the May contract.

We will just have to wait and see.

Even without this occuring, the price action in Silver is very impressive with it up nearly 3% at one point during the session. It continues knocking on the door of the $34 level and although it cannot seem to muster the energy yet to take that out, it is thus far not dipping very much either. I think that if the mining shares could show any significant display of strength, it would help silver run through $34 but so far nothing doing on that front.
Posted by Trader Dan at 10:16 AM 3 comments: 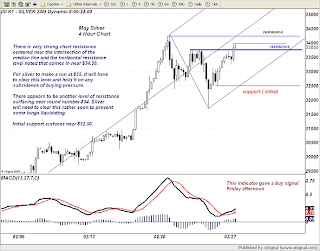 Posted by Trader Dan at 8:36 AM No comments: 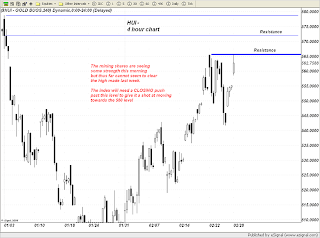 Posted by Trader Dan at 7:46 AM No comments: