I have gone to a 4 hour chart on gold to try to catch some of the volatility in these precious metals markets a bit earlier. The daily chart is simply too slow in these market conditions other than for those who have a bit longer term perspective and are doing more of a position trade and thus willing to ride out larger price swings. If you are actively trading, you are probably using even shorter term charts than this such as a 30 minute or even 15 minute.

I will still post the daily chart on a regular basis, time permitting, but want to make these shorter term charts available. We can still do our studies on that daily as well as the weekly which are the key to getting a bigger view of the market in general.

We can use this 4 hour chart to better pinpoint some of the support and resistance levels that are being formed by the market action.

Note the levels shown on the chart and wait to see the market action around those levels.

Volume to the upside has been decent but I would prefer to see it a bit stronger. It still exceeds downside volume however which is friendly. 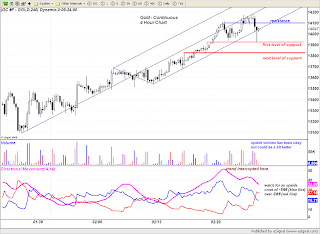 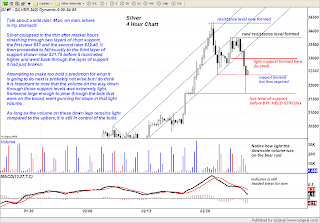 Courtesy of an industrious reader David, who scours the globe gathering stories of interest, comes this story reinforcing the challenges being faced by nearly all of the nations across Asia due to the rising cost of food, not to mention overall inflation pressures in general.

This is why the gold and silver markets will find buying on dips in price.

Asian demand will keep a solid floor of support beneath these markets that we will be able to discern from watching the price charts. Those in the West may throw the metals away dismissing inflation concerns, but those concerns are very much alive and unfortunatey all too well in Asia.

Thousands protest against high food prices in Delhi
You can read the entire story here:
http://www.bbc.co.uk/news/world-south-asia-12549050

Thousands of people have gathered in the Indian capital, Delhi, to take part in a rally to protest against rising food prices and unemployment.
Posted by Trader Dan at 4:07 PM 2 comments:

In keeping with its theme: "One can never own enough US Treasury Debt", the Federal Reserve, the largest holder of US Treasury debt on the planet, added another $22 billion worth of Treasuries this past week, courtesy of the QE2 program.

While they were doing that, they continue to sell those Mortgage Backed Securities that they purchased under the QE1 program. They have sold nearly $170 billion worth of MBS's in the last 8 months. Apparently the proceeds are going to secure more Treasuries.

Since the beginning of December last year, the Fed has added an average of $25 billion worth of Treasuries to its balance sheet each week. At that rate, they will have added another $350 billion in Treasuries by the first week of June. That would bring the total Treasury holdings in their balance sheet to $1.55 trillion putting them very much on target to exceed the combined Treasury holdings of both China and Japan. 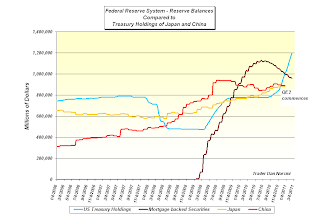 Posted by Trader Dan at 3:48 PM No comments:

Some thoughts on today's wild ride

Last evening I posted a chart detailing a spread between the CRB index and the CCI (Continuous Commodity Index) about which I remarked could be seen the reallocation of hedge fund investment money towards the energy sector and away from the broader commodity sector in general, namely foods and metals.

That seems to have been the theme of today's action as well based on that spread chart. Today, the grains, most notably, wheat, were down, cocoa was lower, coffee was lower and the hogs and most cattle contracts were lower. Cotton was limit down as well. While crude oil settled well off its peak near $103 and gasoline faded from its best level near $3.03, the energy sector still fared better than some of the various commodity markets.

It is clear that there is some position reallocation taking place among the hedge funds towards a larger exposure in the energies. This might be partially responsible for removing some of the bids that we saw today in both gold and silver. 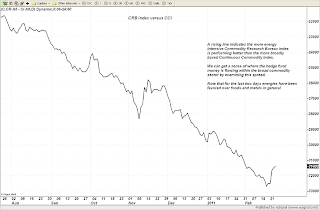 Later in the afternoon, it seemed as if hedge fund money flows into the commodity sector dissipated somewhat particularly as crude faded with money flowing back into equities once again. That took the broader stock market well off its worst levels of the session and might have put a damper on safe haven related buying of gold and silver.

There is a great deal of uncertainty and confusion reining across all of the markets currently as no one is sure where events in the middle East are going to end up going next. That has traders very jumpy and reacting, strike that, overreacting to the least bit of changes in price. No one wants to be caught on the wrong side of a development. Be careful trading therefore and do not get your position sizes too large for the size of your trading account, no matter what you may or may not think things should be doing. You might be right, but if you are not, you will pay very, very dearly for being wrong and quite possibly will not be around to play the game the next time.
Posted by Trader Dan at 2:53 PM 1 comment:

Anyone who is still wondering why stocks had been rallying  nearly straight up since November of last year, prior to the drop over the oil price rise the last two days, has only to note this following blurb from an article posted at Bloomberg's web site today.

Hedge funds increased their net leverage in January to the highest level since October 2007, as they took advantage of record-low borrowing costs to bet that the U.S. equity rally will continue. Debt at margin accounts at the New York Stock Exchange minus cash and unused credit climbed to $46 billion, according to data released by NYSE yesterday.

I seem to recall a period of time in ancient history when the duty of the Central Bankers was to take away the punch bowl. This Fed not only refuses to take it away, they are offering Happy Hour specials.

If oil prices take a tumble any time soon, the equity markets will likely launch another big rally with bonds tanking hard. If oil stabilizes near current levels, the S&P will probably see two-sided trade as it pauses a bit to gauge how the economy is handling the higher gasoline and energy costs. If the events in Libya were to spread to Saudi Arabia, for any reason, all bets are off the table as the equity markets will get slammed by crude oil charging towards $120 for starters.

Gold is now caught up in this same waiting and watching game as is silver now to a certain extent, athough it has been moving higher for other reasons than what are moving gold.

If there is going to be any short squeeze or issues associated with potential delivery problems in silver, they are going to affect the March contract next week. Watching how that process unfolds and what becomes of the board structure for the various contract months in silver will tell us a great deal as to what is transpiring.
Posted by Trader Dan at 2:35 PM No comments:

Some big entity has come into the silver pit this afternoon and taken advantage of the low volume trading conditions to lever the fall in crude oil prices to go after the downside stops in silver. Based on what is now occuring, they have succeeded.

One other notable thing is now occuring - the backwardation structure in the front three silver month contracts is easing and while it is not yet at the usual contango, it is moving towards that direction. This is significant and bears watching. 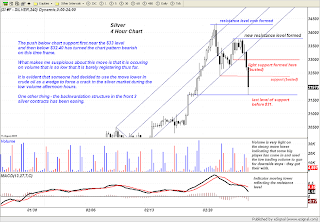 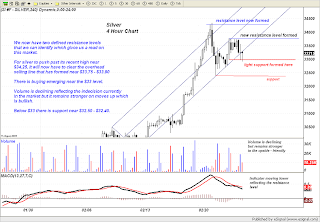