First, let me take the time to express my sincere and heartfelt gratitude for so many kind comments from so many of you. It is difficult to express how such words of encouragement can impact a weary warrior.

Secondly, I am okay health wise so no need for concern there but am just weary with the day to day battle against the hedge funds and their computer algorithms and subsequent volatility. Trading is an invigorating occupation as it engages the full powers of the mind but it can also wear one down as the extent of price swings makes it difficult at times to gauge what is actually occuring. With 24 hour round the clock markets, getting sleep is sometimes the trader's toughest trading decision!

These markets are nothing like the ones I cut my teeth on when I first began my trading career more than 2 decades ago. Back then, we had volatility, but it was the exception not the norm most of the time. The markets were what I call, "well behaved" back then. Then again, I also vaguely seem to remember being able to buy a fully loaded Camaro Z28 for $3,500 back in 1970 or so!  I was too young to be driving back then anyway. Disclaimer ( I did buy a used one however some years later - it was a 1971 with that LT1, 350 engine - I lost count of how many speeding tickets I got on account of that car - if that thing had come equipped with a set of wings, it would have gone airborne - those of you who know the Beach Boys "Little Deuce Coup" - will know what I mean).

I said all this to let you know that I still plan on posting, but I am backing off the number of posts in order to recharge and refresh a bit. Trying to write and trade and track markets at the same time takes a toll.

With that in mind, here is my latest... by the way, Eric King and I will be doing the regular Weekly Metals Wrap together over at King World News so tune in for that when it gets posted. 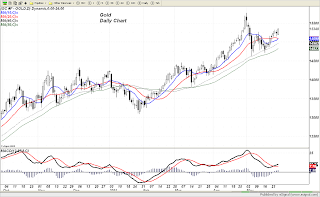 Based on what I can see here, gold looks as if it wants to make a try at $1550, one of those even numbered levels that takes on a technical significance as price approaches it. It is important to note that this is occurring late in May, a time frame during which gold tends to show seasonal weakness. This seasonal weakness however can be attributed to factors, which while important, are not what are driving gold at this time. The festival seasons from and are over and the strong jewelry related demand is therefore missing. However, gold is not deriving the bulk of its strength from that source but rather from currency related matters.
By currency related matters I mean investor concerns over the stability of paper currencies due to the tremendous amount of debt being run up by so many nations. European sovereign debt woes remain a strong source of gold related buying, especially from investors on the Continent. This is reflected in the very strong gold price in terms of the Euro and of the British Pound. As you know, Euro priced gold set a new record high this week.
Here in the , our total federal debt level is at 100% of GDP. We are looking at entitlement programs which will be bankrupt within less than a decade on the current trajectory. Many states are in precarious financial condition which large numbers of municipalities and counties facing their own set of problems. Much of this is tied to the collapse in real estate values and thus affects valuations which are a source of property tax revenues. News on the housing market continues to reflect a sector that is mired in a supply glut at a time when demand is feeble. That is not a recipe for improving valuations anytime in the immediate future.
Ever since Fed governor Bullard let the cat out of the bag and basically told the market that the Fed would not be withdrawing accommodative monetary policy until at least July 2012, the Dollar has been moving steadily lower. That keeps REAL INTEREST rate yields negative and has strengthened the conviction in many traders’ minds that such an environment is going to be the norm for at least another year. Gold LOVES those kinds of conditions and thus has moved steadily higher ever since Bullard’s comments.
While it may dip in price moving forward, as long as this negative real interest rate environment is present, it is going to attract strong buying on such occasions, particularly if Euro-priced and British Pound-priced gold continue their impressive chart action.
Also, an additional kicker for gold is that the CCI, the Continuous Commodity Index, is now trading above 650 as it puts a bit of distance between itself and that critical technical chart level of 640. The commodity markets are signaling that prices had fallen far enough and that this fall had been sufficient to scare the Fed out of any further hawkish talk. I would be surprised to see much in the way of comments coming out from the usual hawks on the FOMC. As long as these economic data numbers that we keep getting are coming out on the low side of expectations and disappointing investors, the doves at the FOMC are going to be getting the airtime. 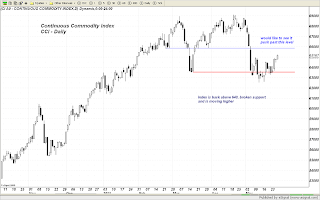 Note that the Dollar has broken down through the 50 day moving average at this hour and is also down below support near 75.20. A week close today does not bode well for next week. 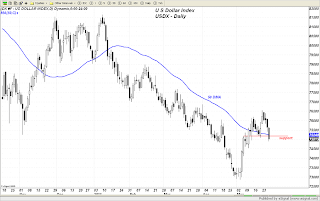