The following chart of the Continuous Commodity Complex or CCI, shows a downtrending channel that has held the complex for the last several months. In November of last year, the index broke through the 50 day moving average and remained ABOVE it for more than a week before succumbing to selling pressure heading into the end of last year. 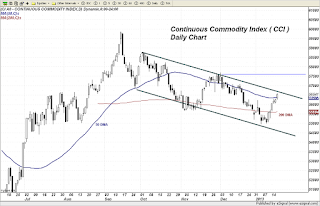 Early this year it was trading below both the 50 day moving average and the 200 day moving average. As of today, it is now back above both and is also nearing the downsloping line that marks the top of the trend channel. It is no surprise therefore to see SILVER looking very strong on its chart right now especially with the very bullish patterns on the platinum group metals showing no signs of abating for the immediate near term.

Were it not for the weakness in the grain complex this morning, the CCI would be right on that line at the top of the channel. Let's watch this action very closely as it will indicate whether these incipient signs of life in the commodity complex are the beginning of a period of sustained upward trending moves across this sector.


Keep in mind that in spite of the massive injections of liquidity by the Central Banks of the WEst (I include Japan in this category), commodity prices have heretofore been rather unresponsive. The reason has been that traders were initially more fearful of a global slowdown than they were of any inflationary result. Based on the jobless claims number this AM here in the US and data from other global regions, that the slowdown fears are receding and growth expectations are solidly in place. In other words, it appears that for now, the Central Banks have won the battle over deflation.

So what does this mean for commodity prices? Simple - based on the charts, and the action in the interest rate markets (more on that later), traders are speculators are beginning to transition towards the growth play (RISK ON) and away from the slowing global growth scenario (RISK OFF).

Watch that solid blue line that I have marked as RESISTANCE near 575 - 577. If this index pushes FIRMLY past that line, we will know that the price of wholesale commodities in general are going to begin a sustained rise higher. This should further unleash bullish forces in the precious metals but especially in silver compared to gold.

With this in mind, take a look at the chart I have constructed below. It is a ratio chart comparing the level of the S&P 500 ( a broad view of the US equity markets) to the level of the US Long Bond. I use this as a type of indicator to help me discern where money flows are heading and whether or not speculators have an appetite for risk. 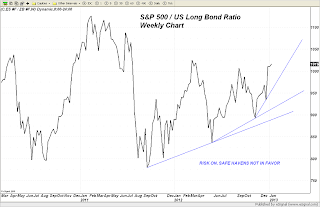 Notice since late in 2011, the trend has been in favor of equities over bonds. Yes, there have been periods within this trend where RISK has been out of favor leading to money flows out of equities and back into bonds, but the trend is pretty solid. What I wish to point out especially however is that the ratio is accelerating and has been since late spring of last year. It has increased even more sharply since fall of last year. Any wonder why the equity markets are shooting higher? Hot money is flowing into equities at the expense of bonds all in anticipation of GREATER RETURNS in this ultra low interest rate environment.

In this light, can you understand why we now have a top in the US Long Bond? As mentioned in a post a while back, I would be surprised by a RAPID, SHARP DROP in the long bond as the economy is certainly not strong enough to sustain any pressure from rising rates. At the same time however, I expect to see a SLOW GRADUAL GRIND LOWER which will accelerate as the impact from all the liquidity created by the Fed's QE programs begins to gather steam and inflation expectations increase.

I want to also emphasize that I expect significant difficulties to arise once the Fed attempts to unwind its balance sheet. Personally I am beginning to wonder if they are ever going to be able to do so?


Note on the chart that bonds have fallen to major chart support but managed to eke out a return above that level and are currently holding. However, their rally off the level looks weak. Watch out if this support level gives way on a weekly basis close, as it will entail the definitive shift away from deflation fears and shift the balance of power to the hands of those looking for inflation as the next worry. 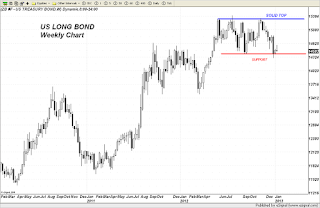 Once such an event occurs, I would anticipate a solid move higher in silver in particular.