Gold continues to bounce higher in today's session as it moves further away from the bottom of the BROAD 8 MONTH TRADING RANGE shown on the chart below. The metal actually seems to be reverting to its safe haven function as it is holding its gain in spite of continued weakness in the broader US equity markets.

It does seem to have hit a band of resistance, as might be expected, near the psychological round number of $1600. For gold to get a handle of "16" in front of the price, we are going to need to see more hedge funds willing to go long this market even as their algorithms are increasingly playing a large number of the commodity markets in general from the short side. A clue that this might be happening is to watch for an increase in open interest which will mark an end to the wave of long liquidation that has dropped the price of gold so sharply over the past 2 weeks. We actually did see that increase in yesterday's open interest so I am especially interested in seeing Monday morning's data about today's session. 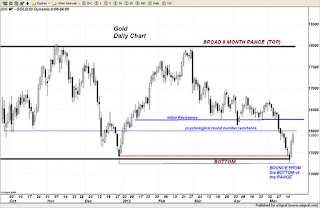 It should be noted that the rally has now taken the price back above the 10 day moving average. That is oftentimes a level that funds who are short will begin covering at. If the market has enough strength to make it to the 20 day moving average near $1617, you will see more of that short covering plus new buying from this camp. We will have to see whether or not that transpires early next week. I get the distinct impression from watching the price action in this market, as well as a host of other markets, that traders are extremely nervous, if not downright fearful about what might happen over the weekend in regards to the Euro zone and many did not want to risk being on the short side of the gold market heading into a weekend.


As stated in previous columns, the bounce from the bottom of this extended range is constructive as it further cements this level down near $1530 as extremely solid support. A sea change would therefore have to occur globally for those buyers whom have been active down there, to sit on their hands were prices to head back lower and revisit that level. I personally will feel a bit more comfortable that will not occur IF we can climb back over $1600 and keep that handle on the price. That will tell prospective buyers that the metal is not going to get any cheaper and if they were holding off waiting for better prices, they had better get in while the gettin's good. That means next week's price action will be very telling as to what we can expect for gold moving forward.

The reason I say this  is because the first time that gold dipped down towards $1530 back in September 2011, it did not GET BACK DOWN THERE AGAIN for another three months. Then it rebounded immediately in December 2011 and has only now come back down to that level again. This time it was a period of 5 months. If prospective buyers see this thing will not back down below the $1600 level, they will commit to larger purchases as the odds favor it being another rather long period before they can hope to buy it this cheaply once again.

The HUI has not been able to REMAIN ABOVE the 400 level. If it can pull that off before the end of trading today, it will be a sign that this sector might have finally been sold out. If it closes back below the 390 level, it is going to move lower and retest the bottom made this week near 372. It did form a POTENTIAL spike bottom this week but as stated, it needs to confirm this by closing a week above the 420 level. Aggressive traders/investors can try nibbling on the long side of QUALITY MINERS only, with good chart patterns, PROVIDED they employ sound money management techniques. That means if the price moves through this week's low, get out - no questions asked. You can always try again; i.e. unless you foolishly turn a small trading loss into a large trading loss and end up looking like road kill on the trading floor. 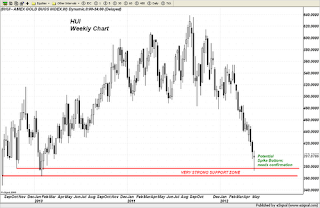 Do not try arguing with a market and attempting to tell it why it is not behaving properly (that means going in the direction you THINK it should be going). Guess what? the market doesn't give a rat's ass what you or I or anyone else for that matter, thinks it should be doing. It will do what it wants to do, when it wants to do and the sooner you recognize that and give it the respect it deserves, the sooner you will be on your way to becoming a successful trader or investor. Show me a stubborn fool who refuses to admit that he or she is wrong for the time being and I will show you yet one more casualty whose carcass lies dead in the trading arena. The inscription that you will see on their trading tombstone is as follows:

"Here lies Mr. or Ms. Wannabe TRADER - he was right to the bitter end".

Silver has managed to hold the $26 level once again, although this time around it did not get down as close to 26 even as it has done on two previous occasions, once in September of last year and then again in December of last year as well. I am still skeptical of this market however as it is too closely associated with the risk trades. If Copper could ever stop falling out of bed, I will feel more comfortable about silver. The best thing that can be said about it right now is that at least it stop going down for a change. If we get any sort of news over the weekend detailing a worsening of conditions in Europe, silver is going to turn right back around and go lower. You just have too many funds selling the metal who need something to shift the sentiment towards inflation to bring them back into this market in a very big way. That means we will need more statements from Federal Reserve officials leaning towards QE sooner rather than later.

One last thing - I do find it very noteworthy, that in spite of the fact that the US equity markets are sinking today and nervousness remains in the minds of many traders, the US Dollar cannot seem to find a bid. It reached as high as 81.93 before swooning once again. That tells me that 82 in the USDX is a FORMIDABLE RESISTANCE LEVEL that is going to take some sort of terrible economic news to get enough "safe haven" bids coming into the DOllar to absorb all of the offers from willing sellers at that level. 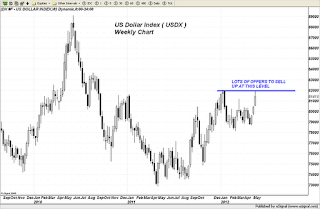