Take a look at the following TWO charts and see if you can notice how similar the two of them are.
You can tell that both charts, while not identical, are eerily similar in the manner in which they depict the overall price action. 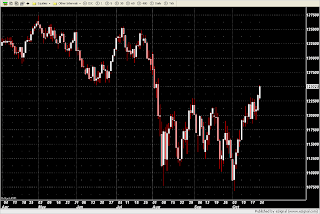 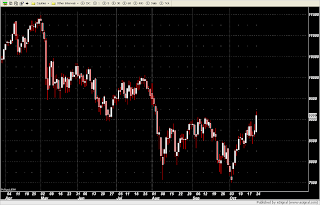 The top chart is the S&P 500. The lower chart is Crude Oil.
They both tend to move up at the same time, mover lower at the same time and grind sideways at the same time.
What these charts tell us is that there is no longer any SERIOUS INVESTMENT "STRATEGY" in today's financial markets. All that they are doing is reflecting either the willingness of the HEDGE FUNDS to take on RISK TRADES or to FLEE from RISK.
On any given day, if the risk trades are on, these nitwit hedge fund managers buy everything in site except for US TREASURIES or the US DOLLAR. If the following day brings in risk aversion trades, they throw away everything purchased the previous day and do the exact opposite.
Truth be told this sort of thing has nothing to do with INVESTING. It has everything to do with MONEY FLOWS generated by computer algorithms. This sad state of affairs is what Central Bank interventions and constant interference into the financial markets has reduced our markets to.
Traders have to put aside their personal disgust at this madness and trade accordingly if they wish to profit. Still, in this trader's opinion, this is one more symptom of the decline of the West. No longer is the stock of various companies bought because of long term prospects for solid profits based on solid research and good analysis. Instead it goes up based on whether or not the Central Banks will spit more liquidity into the marketplace.
Heaven help us all.
Posted by Trader Dan at 11:18 AM 12 comments: