Gold Stuck in the Mud

I wanted to see how gold would settle today before commenting further. As stated in my earlier post, now that the big FOMC non-news event is out of the way, the market is selling the fact. If this is the best that gold can do, it is difficult for me to see what it is going to take to drive it up through resistance. It just hearkens back to the US Dollar as far as I am concerned. If that weakens, gold moves higher; if it strengthens, gold moves lower.

I can say this however, it is not helping the cause of gold to see crude oil going lower. That market has been a very reliable harbinger of shifts in trading sentiments in regards to inflation or the lack thereof. Swelling stocks of the black goo are indicating just how sluggish any "growth" is for the US economy. How inflationary pressures can be anticipated with energy costs moving lower, grains generally weaker and wages stagnant remains a mystery to me.

Now that the US Dollar has held at chart support, I would expect gold to weaken until the Dollar meets some overhead resistance. Could that happen as soon as tomorrow? Sure it could. You name it; just about anything can occur in these convoluted markets anymore.

All that this means is that we need to take each trading day as they come and try not to read too much into any one day's price action. If you get some follow  through from one day to the next, be pleasantly surprised and grateful for any sort of "good behavior" in the market because chances are it will be fleeting.

Here is the thing which continues to stand out for me. The speculative crowd continues to dishoard gold. As long as the reported gold holdings continue to plummet in the biggest gold ETF, GLD, I cannot be bullish towards gold. That does not mean I am necessarily wildly bearish; it simply means that a primary catalyst for a SUSTAINED MOVE HIGHER is not there. It leaves me more neutral until I see something which gives me reason to have a strong conviction in regards to short term price direction.

Here is the chart: 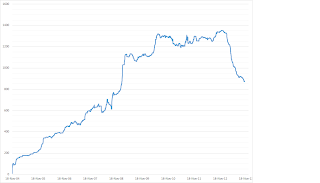 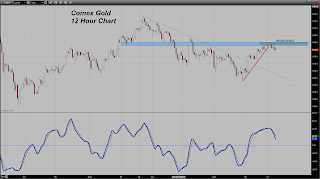 I leave you with this chart of Gold.... notice where it has run out of steam to the upside. It will have to clear this band of overhead resistance to run out some more shorts and to entice more new longs from the momentum crowd. The indicator is rolling over meaning that bulls need to step up quickly to avoid a setback lower in price.
A push past this week's high will be a big deal if it happens as it will allow price to test $1380 and perhaps as high as $1395 or so. If it fails to extend, support comes in first new $1340 - $1335, (It is near there as I type this) and then again down near $1320.
If the US Dollar index can clear 80, gold will drop to test $1320 in my view. If the Dollar fades and the Euro in particular can recapture 1.38, we should see gold strengthen. We are back to watching the gyrations in the Forex markets once again it would appear.
﻿
Posted by Trader Dan at 4:46 PM 24 comments:

Yes indeed, that honorable profession, that noteworthy use of precious time, that virtuous expenditure of human energy, has once again been called forth by the monthly proclamation of the divine oracles - namely the FOMC.

Ah yes, those dispensers of wisdom from above, of knowledge and insight, have graced us mere mortals with another round of insightful analysis into the workings of the machine we know as the US economy. And pray tell, what did they tell us this month? Not a damn thing that we already did not know!

They held steady - no tapering of the bond buying program - not that anyone out there expected them to announce such a thing - so now it is back to parsing the statement for CLUES into the inner workings of our monetary masters. "Let us see if we can anticipate their next move for in it, lies our fortune", is today's mantra.

For Pete's sake, are as many of you out there as sick and tired as I am of this pathetic routine already? What a nauseating display of groveling by the once dynamic forces of US capitalism - sitting around waiting and licking their lips to see whether their masters will toss them some chew sticks.

Regardless, the initial moves that I am seeing is weakness in gold, strength in the US Dollar and believe it or, downward price action in the US equity markets. This seems to me to be a case of "Buy the rumor; sell the fact". The markets were essentially bid up, (gold and equities) in anticipation of a continuation in the bond buying without any tapering and that is exactly what they got. So now what? Bull markets need to be fed and one has to wonder where the food is supposed to come from next?

Yes, the Fed is on hold probably until next spring at the earliest as far as tapering goes but some are gleaning a - drum roll here please - an early taper in December because  - another drum roll here - the Fed did not seem to be quite as negative on the economy as many were expecting them to sound, especially with so many of the various governors making the rounds right after the government shutdown ended and were sounding like the sky was falling.

this is leading Dollar bears to cover short bets and as such, bringing in selling to the gold market. It is also hitting silver. Interest rates are moving higher as a result. Here we go again....

I have not written much this week mainly because I am trying to spend my time in doing something more constructive than sit here and watch this idiocy all day long, day after day - I have been engaged in carving some pumpkins for Halloween, something much more enjoyable and in the larger scheme of things - much more lasting that the sentiment for each and every trading day. As a matter of fact, I am willing to bet that my carved pumpkins last for at least three days - far longer than the shifting mind sets of traders who seem to have managed to condense the entire business cycle into a 24 hour period instead of 6 months like it used to be.

Let's see where gold settles when the day ends... for now, $1360 has been reinforced as resistance which has held.

The dollar also looks to have found support above critical support near the 79 level on the USDX.

Looks like more range trade ahead which means the HFT crowd will be back to screwing with the markets once again and continuing to plunder the rest of us. I am thinking of making a new video game for Xbox. Instead of Call of Duty, I am going to make the HFT crowd the alien invaders while the "good guy" traders, get points for crushing them and sending them home crying to their mammas. Hey, I can dream can't I?