Euro Gold within 70 euros of its all time high

Gold when priced in terms of the Euro is showing great strength continuing to track higher ever since it found buying support at the 61.8% Fibonacci Retracement level shown on the chart.

It has now managed to push through the last Fibonacci level of note and based on the norm for most TA, it should now make a push back to retest the recent all time high, which is a mere 70 Euros above its current levels.

It is very evident, that many European investors and average citizens are very far from being comfortable with the so-called "solution" that has been hobbled together by the European monetary and political leaders to handle the fallout from the sovereign debt woes currently besetting the EU. 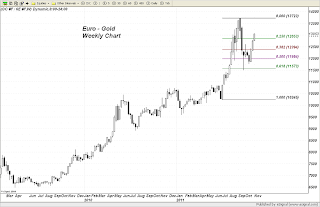 Gold is putting in a very strong showing in today's session as it appears a large influx of new speculative money has found its way into this market. Investors are moving back into both gold and Treasuries as safe havens with gold being the favorite of the two - a nice development to say the least.

Buttressing gold's fortunes us a good showing by silver and a particularly good showing in the mining shares which are surging. 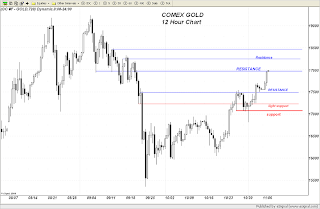 The $1800 level is a psychological resistance level because of the handle change from "17" to "18". If it can clear this level and keep oscillating above it, funds will come in and push it to the $1820 - $1825 level which is the next resistance zone on the chart.


Support should show up on any potential dip to $1755 - $1750 with very strong support now arising closer to $1720.
Note that this very strong move higher in gold is occuring with a backdrop of the US Dollar being relatively unchanged. That means gold is moving higher in terms of most all of the major foreign currencies - a sure sign that the metal is catching its bid as a SAFE HAVEN.


I want to emphasize this because we are repeatedly told by those who should know better that gold has failed as a safe haven. They say this because they do not understand the SHORT TERM effect of money flows in today's financial markets and how interwoven overall commodity market performance is to hedge fund computer algorithms.
Gold gets sold initially during such times of general risk aversion because it is part of the basket of commodities that comprise every single commodity sector index out there. Those indices include the CCI (Continuous Commodity Index), the CRB (Commodity Research Bureau) index, the Dow Jones/AIG Commodity Index or even the Goldman Sachs Commodity Index (GSCI).  Computers do not think - they just do whatever they are programmed to do and selling commodities across the board is programmed into these algorithms when certain pre-defined conditions occur. It takes independent thought and analysis, combined with DISCRETIONARY trading, and not system trading, to counteract some of this mindless buying or selling. Only when there is sufficient Discretionary trading taking place, can enough money flows arise to stem some of the effects from these computers.
That means we need buying in the physical gold market that looks for value to counter the hedge funds. That has been the pattern in the gold market for more than a decade now. Those who keep pronouncing such foolishness such as "gold is a poor safe haven", in order to say something designed to get themselves maximum exposure in the US financial press because of its shock value would be well advised to adopt a longer term view and broader their narrow perspective. They are wrong and could not be more ignorant.
Once the value-based buyers absorb the computer generated hedge fund selling, then the technical factors begin to improve for gold as its chart pattern improves and back in come the same hedge funds, this time on the buy side. That is what is happening today once again.
Posted by Trader Dan at 1:04 PM 3 comments:

Mining shares are getting a very strong bid in today's session taking the HUI up sharply through the 600 level, a psychological resistance level. As you can see on the chart, the index is moving ever closer to the top of the recent chart gap created last month when the shares were sold off during a downdraft in both the gold and silver bullion markets. I would expect the perma bears in the shares to try to make an effort to hold the index BELOW this resistance level. If they fail, I believe there will be enough momentum in the sector to mount a move back to the recent all time high.

Downside support is back at the bottom of the gap and is noted. 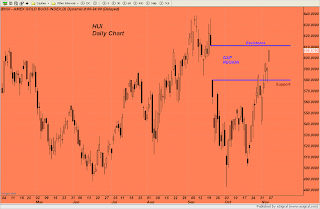 Note how the miners are continuing to outperform the broader equity markets today as they have done so over the last month.

Also note the much longer term monthly ratio chart I have constructed showing the performance of this sector against the broader US equity market over the last decade+. 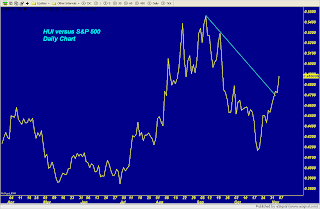 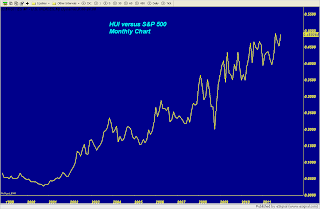