I wrote earlier today about the copper market looking very vulnerable here based on its daily price chart. In scanning some of the commodity markets another one is giving some signs that it too is possibly ready to wind down - Cotton.

As you can see by the chart, cotton has staged one of the most ferocious upside moves that I can recall in a commodity with perhaps the exception of Minneapolis Wheat some time ago. It is currently trading at levels not seen since Reconstruction when much of the South was laid waste coming out of the War between the States in 1861-1865. 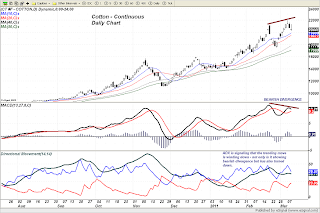 The CCI, Continuous Commodity Index, has benefitted a great deal by this massive display of strength but in looking at the cotton chart, it is giving off some signs that its upward strength is sagging. This is not to say that it has topped yet - it has given off three separate signs of topping in its huge run and has gone on to negate every one of those signs and make new highs. But I do believe this bears watching.
We are beginning to see some evidence that various commodity markets are now topping out - Wheat, Sugar, Copper, and perhaps Cotton among them. Cocoa is beginning to look a bit heavy as well.
On the other hand we have Crude Oil, Gasoline, Heating Oil, Cattle, Hogs and Coffee all looking very strong.
In other words, we are beginning to see some of these markets now beginning to trade more on their own set of demand/supply fundamentals and not just getting a solid bid based on the Fed's debauchery of the US Dollar which resulted in money being pretty much jammed into the commodity sector rather indiscriminately. This development is going to cause the CCI to rise at a slower rate than it has heretofore been rising barring some sort of sudden development that affects a large portion of this group of commodities.
The wild card in all of this is the movement in the price of crude oil. Nearly all of our markets right now are basically trading crude. How it fares in the weeks ahead is therefore going to determine what some of these other commodities will do.
I also think we are going to continue seeing managed money flows ebbing and flowing into the food, base metals, and softs versus the energies and precious metals based on developments in MENA that could curtail oil production.
This is going to add another element of volatility to the markets. Fasten your seat belts; it is going to be a wild ride.
Posted by Trader Dan at 3:34 PM 3 comments: 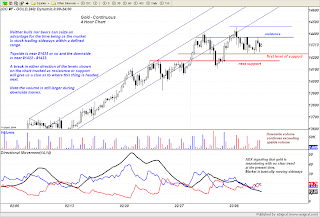 Fat cattle prices are at an all time high with demand for beef not letting up as strength in the US export markets (thanks in part to the falling US Dollar) in combination with a smaller supply has sent cattle prices rocketing.

My conclusion - if you are a deer or an elk, be careful showing yourself in public! 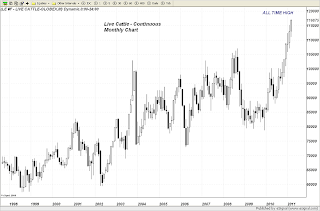 This story came down the wire last evening from Bloomberg. What struck me was the fact that this is coming at the same time that we see more stories coming out concerning China's attempt to position the Yuan as a global currency. The combination of both ultimately will translate into less Chinese demand for US Treasuries since there will be fewer US Dollars in China's coffers if the trend continues.

Now combine this with the reports from Zero hedge this morning detailing the change in Pimco's portfolio in regards to US Treasuries and we come back to the same issue that I and others are raising - where is the demand going to come from to absorb all these Treasuries sitting on the Fed's balance sheet once they attempt to begin backing out of QE (asuming that can even be done with crude oil refusing to go down and especially if it were to reach the levels some are predicting it could reach).

Yes, the Primary Dealers can buy them but at the cost of pulling all this liquidity out of the US economy. Does anyone really believe the stock market rally is going to continue with a rising crude oil price and liquidity being sucked out of the economy? How is the real estate market supposed to recover with the resultant surge upward in interest rates? Can US businesses really ramp up hiring at a rate fast enough to absorb the huge number of unemployed plus bring the jobless rate down closer to 5% or 6% anytime soon in a rising interest rate environment? And exactly how does $4.00 and higher gasoline translate into higher economic growth if all the funny money is being withdrawn?

By Bloomberg News - Mar 8, 2011 6:15 PM PT
China may deflect international pressure for faster yuan appreciation by reporting the nation’s smallest trade surplus in 10 months tomorrow.
The excess was $4.9 billion in February, from $6.5 billion a month earlier, according to the median estimate in a Bloomberg News survey of 21 economists. Data for the first two months of the year is typically distorted by the timing of a Lunar New Year holiday.

Could Crude Oil be Derailing Copper?

Copper has been having great difficulty extending its gains ever since the events in MENA began in earnest and pushed up the price of both crude and the liquid energies.

You might also note that I had posted some ratio charts here showing how money was flowing out of copper and into the precious metals. There was also a chart showing the CCI versus the CRB index detailing the money flow into the energy sector of the commodity complex at the expense of some of the base metals and even the food complex. Clearly there has been a decision among the hedge fund managers to reallocate funds that had been committed to the red metal to the precious metal and energy category. 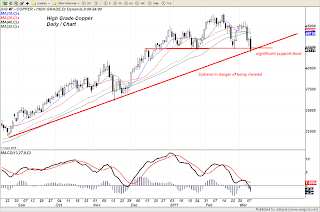 Whether or not this trend continues will depend on what happens in MENA land but for now the exodus of some of the managed money from the copper market has left its chart sitting right on top of a significant chart support level. You'll note that both horizontal support near $4.21 and trendline support at the same level are converging exactly where the price is currently sitting. If copper falters here, it will indicate that money managers believe the rising crude oil price is going to slow overall economic growth and thus pull copper prices lower.

Stay tuned as this is a very volatile situation with no one quite sure how things over in MENA are going to be resolved.
Posted by Trader Dan at 9:03 AM 1 comment:

The chart pattern on the 4 hour basis shows us pretty much the same thing as yesterday - Silver runs into strong selling whenever it approaches $36. Part of this can be attributed to the vagaries of the crude oil market which is swinging up and down depending on traders' perceptions of the events in MENA.

When crude dips, silver seems to lose upside stream; when crude rises, it moves up. The problem is the same as yesterday however; there is very little upside volume. All of the volume is on the downside moves. That continues to trouble me. If the bulls cannot muster any more power to the upside, some of the older longs are going to get stale and will probably liquidate unless the metal can take out overhead resistance above $36 and HOLD ABOVE this level.

As noted on last evening's chart, silver has tended to work off the bearish chart signal on the MACD (other indicators not shown as well) by moving sideways above a horizontal support level and thus consolidating while it then builds enough of a base to launch another leg higher. 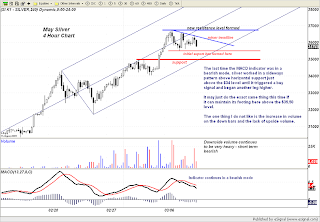 What concerns me is the fact that during the last consolidation phase, the dips lower in price were on low volume while the blips higher were where the strong volume was. Clearly buyers were eager to come in. Now we are seeing a change from that pattern where the buyers seem more eager to run on the way down.

It is not the end of the world but as stated above, the bulls will need to hold horizontal support near and just above $35.50 for a repeat of the prior performance the first week of this month.

On the delivery front for the March contract - we finally saw a decent number of deliveries - 79 to be exact - with Morgan and BNS issuing the bulk of those and Barclay's the biggest stopper of the metal. Morgan was issuing for customers and not for the house account. The EFP's were all done in the May once again, 1,612 of them; nothing in the March. If Morgan is supposedly paying a cash premium to longs in lieu of delivering, it is not showing up in the March contract. Could they be doing this in the May? It is unclear at this point. Perhaps we will be able to decipher some of this come Friday's COT report but I doubt it. Incidentially, there are 1,516 contracts still open in March silver.

See the chart for some short term support and resistance levels. The key for silver will be whether or not it can hold $35.50
Posted by Trader Dan at 8:37 AM 21 comments: