continued selling in gold after yesterday's confirmation of a failure to take out overhead resistance near the 50 day moving average and its further retreat from psychological resistance at the $1700 level.

Today price once again fell below the 200 day moving average as the double whammy from long liquidation from short-term oriented bulls, in conjunction with fresh short selling from speculators, has overwhelmed bids coming from the swap dealers and bullion banks who are covering previoulsy established shorts up near the overhead resistance zone. 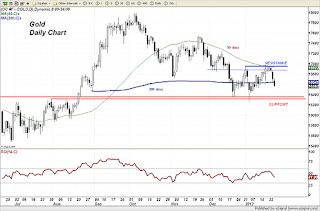 The RSI continues to confirm the move lower within the broad sideways trading pattern that has now existed since the middle of December last year.

It is the same story for the present - speculators are not interested in gold or in anything related to gold, such as shares right now, as they are after a chance to secure better returns on investment into the broader equity markets.

Once again the S&P 500 has made yet another fresh 5 year high! (at least the bond market is finally showing some signs of rationality as it is sinking sharply). The yield on the TEn Year is knocking on the door of a 9 month high right now as it is currently sitting at 1.934%.

What is missing in gold and in the gold shares is money flows. It is really that simple. Heck, even a crude oil price that is rising, in spite of not especially bullish fundamentals, cannot seem to generate any inflation-based buying in gold right now. It is simply off the radar screen of the big hedge funds and momentum based buyers. I am not sure what it will take to recapture their enthusiasm from a fundamental standpoint at this juncture but from a technical standpoint it still goes back to the fact that gold must get a "17" handle in front of it to generate any bullish excitement.

Downside support still remains in place between $1640-$1630 on the chart having not as of yet been tested. One can assume that the same buyers whose actions have forged out that technical base of support still remain viable but we will need to see evidence of their eagerness to buy before just presuming that it is so.

Again, there is no help whatsoever coming from the mining shares which continue to effectively undercut any hint of bullish sentiment that might dare to form in the actual metals as far as the Comex futures go. I am beginning to get a sense of real capitulation selling in the mining sector. The despair, anger, frustration and downright disgust being expressed by even some long term holders of the miners is growing, rightfully so I might add as money invested in them was lost opportunity elsewhere. We will continue to look for signs therefore of a lasting bottom in that sector but so far, I do not see it as of now.

The HUI is perched periously atop major support - if that gives way for any reason - and it does not matter what that reason might or might not be at this point - the final washout in the mining sector will be underway with the transition to some very strong hands. It should be kept in mind however strong hands are "strong" because they are willing and ABLE to sit on trading losses long after weaker and less capitalized holders have thrown in the towel.

Just be careful about willy-nilly buying dips in price in these mining shares right now. Wait until you see some evidence that the selling has been exhausted. Generally speaking, that tends to take the form of a spike bottom in the gold mining shares but of course, no two days in trading are ever the same. That is what makes it difficult and requires constant diligence and flexibility.

Note on the chart below, a monthly chart, that the HUI is pressing very hard against that support level coming in near the 400 level. It is imperative that it does not close below that level before this month ends or else it will more than likely move lower and test the 370-360 level. 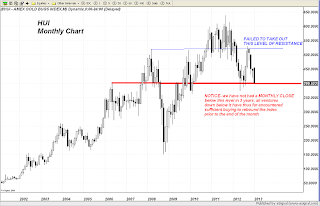 Considering that the price of gold was sitting closer to $1100 back in January 2010 when the HUI last had a MONTHLY CLOSE below this level, it is astonishing how pitiful the mining sector has performed especially seeing that gold is trading over $500 an ounce higher than it was back then. Why in the hell cannot some of these miners show any significantly stronger profits and offer a better return on investment for their shareholders? Thankfully there are some well run companies out there but their stocks tend to get lumped into the same outhouse as the rest of them do. I have said it before and will say it again, unless the CEO's of some of these mining companies get serious about returning shareholders value (and that means making hard decisions to rein in costs and become more efficient) they should not be surprised to see those same shareholders voting with their feet and taking their hard earned investment dollars elsewhere.