Treasury holdings of the Fed, China and Japan compared

Following is the most recent data detailing the overall Treasury holdings of the US Federal Reserve compared to those of China and Japan. Treasury data is current through this week while China and Japan data is of November 2010.

The data is presented in a format showing the total amounts only. If you would like to see the actual progression of the Fed's increase, please click here:

which will take you to a post I prepared a few days ago showing the build over a period of time. 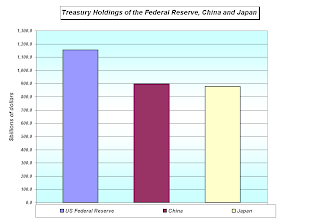 While there is not an exact correlation between the Fed's Custodial Holdings and the TIC report, the two are close enough that we can use the former to get a decent gauge of where the latter is heading. Note the chart below which is a graph of the total amount of Treasuries that the Fed is holding in custody for foreign Central Banks. 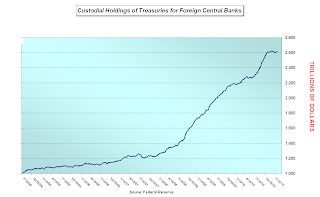 At the start of November of last year, the total amount of Treasuries held in custody was $2.59 trillion. As of today, that number is being reported as $2.62 trillion or an increase of $30 billion.

We know that the Fed has been engaging in the purchase of Treasuries related to the QE2 program since that time frame. Over the same period, the Fed's reported holdings of Treasuries has increased a whopping $319.5 billion or more than TEN TIMES the amount of other foreign Central Banks.

Mr. Bernanke likes to state that the Fed is not monetizing the debt because that would be a permanent situation and according to him, QE is only temporary. My view is that if it quacks like a duck and acts like a duck and looks like a duck, it is a duck. While there may indeed be a semantic difference, the effect is still the same as far as I am concerned. The Fed is seemingly becoming the biggest buyer of Treasuries on the planet.
Posted by Trader Dan at 4:37 PM 1 comment:

This shorter term silver chart gives you a pretty good indicator of at what level the sellers are surfacing. You can see that silver is having a bit of difficulty holding above the $30.25 level. We did get one push through there that took it up as high as $30.50 but it faded and has not since been able to push any higher than that $30.25 level.

This needs to be cleared on good volume for another run towards $30.50 which is acting as overhead resistance for any move towards the recent peak above $31. 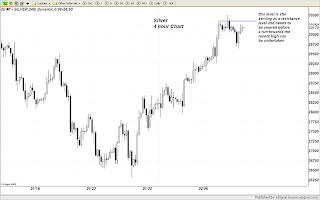 So far its dips are attacting buying below $29.75 which is a real plus for the market. If it could actually consolidate a bit near these levels it would actually be a bit more healthy than if it took off on a headlong tear higher. Any consolidation would help us discover at what level the market in general is viewing silver as having value.
Posted by Trader Dan at 4:00 PM 3 comments:

The US Dollar was the beneficiary of two items in particular today. The first was the falling number of unemployment claims which has traders convinced that the US economy is continuing to mend and that the labor markets have finally bottomed out. They may well have but that is a long way from inferring that the jobs situation is going to reach anywhere near what could be considered healthy for some time. Even the Fed Chairman was not rosily optimistic about this when questioned yesterday.

The other item is continued fears related to the health of the Eurozone. Portugal in particular is on traders minds today as its bonds are reflecting a great deal of unease regarding its financial footing. This is leading to selling in the Euro which as you know constitutes over 50% of the basket of currencies that comprise the USDX.

For now, it appears as if the Dollar is attracting buying on dips into last weeks lower end of the trading range. It has some light technical resistance near 78.50 which it could well take out if we get some more bad news out of Europe or if we see additional confirmation of an improvement in the US labor markets.

For me to be convinced that this is anything other than another one of the Dollar's many bounces in a longer term downtrend, it would at a bare minimum have to convincingly clear the horizontal blue line shown on the chart and push past the 79 level.

Any extended bullish move in the US Dollar however will need to see it push past the twin tops shown on the chart near the 81.50 level.

Some of the selling in gold today was tied to the rather strong advance in the US Dollar so we will have to continue monitoring its action. It is noteworthy however that the strength in the greenback did not affect the broader commodity markets as we are accustomed to seeing, at least earlier in the session when the CCI went on to make another record high. As the afternoon wore on however, it did appear that some dollar related action began pulling several of the commodity markets down off of their best levels of the day. 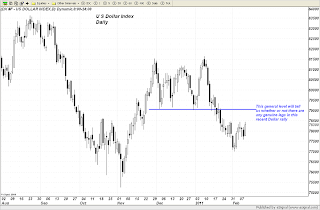 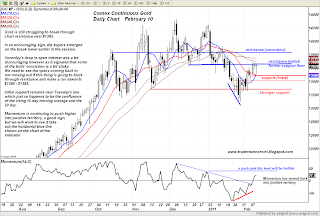 This article nicely dovetails with our recent interview with Eric King where it was mentioned that there exists the real potential for China to increase it gold reserves from near 2% to closer to 10% of its total overall reserves.

David Hale actually goes further than the scenario we were outlining where we were talking about them perhaps acquiring a bit more than 5,000 tons.

Apparently that is a bit too conservative.

Either way, it continues to reinforce the idea that the Asians are on the prowl for the yellow metal.

CAPE TOWN (miningweekly.com) – China’s central bank is being advised to increase its gold holdings nearly tenfold to a level greater than the world’s biggest bullion depository, the US’s "Fort Knox".
Global economist David Hale, who addressed the packed Mining Indaba in Cape Town attended by a record 5 700 people, says that China’s gold reserves are currently at 1 050 t – only $30-billion to $40-billion compared with the country’s total assets of $2,8-trillion

Out of pity for Admiral Ben Farragut (damn the torpedos, full speed ahead) and his claims yesterday that inflation is not a serious problems because the TIPS tell him so, we have provided a picture of what the rest of us mere peasants are going to be facing as we go about buying those things which are somehow not considered important enough to include in the CORE when looking at the Consumer Price Index.

Of course one can easily see by observing the chart below that there is no connection whatsoever between Quantitative Easing and out of control commodity prices (Wink, Wink). That is just a figment of our imaginations or as perhaps Ebeneezer Scrooge might say, the result of a bit of undigested beef.

I have two views posted; a weekly and then a monthly for a longer term perspective on the beast that the Fed has unleashed upon us all.

Also keep in mind that as you view these charts, crude oil prices are some 40% below their peak made back in 2008. Heaven help us all. 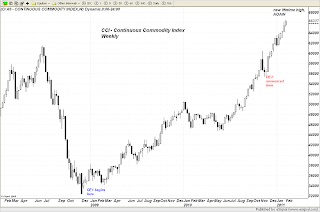 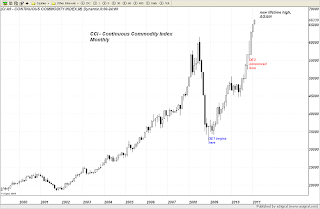 Posted by Trader Dan at 8:43 AM No comments: