For you Silver guys out there, by request...

With all the recent selling occuring in the silver market, the chart informs us that metal still remains mired within a very broad trading range that has contained price for the better part of 15 months now.

The top of range is from $35 - $35.50 while the bottom of the range is between $27.0 - $26.50. Within that range silver had put in what appeared to be the beginning of an attempt to start a trend back in October with that strong upside reversal week but it then seemed to run out of steam as it approached $35 and now is sinking lower once again. 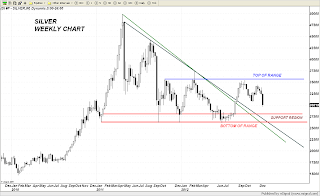 There is a bit of psychological round number support at $30 although that is not really all that much in the way of actual technical support. Very strong support lies down near $28 and extends all the way to $26.50. This region has proved to be rock solid in terms of buying support for that same 15 month period mentioned above.

I am of the opinion that for silver to take out this significant support level, an enormous shift  in sentiment would have to occur in regards to the overall global economy. In other words, in spite of the easy money policies being followed by the FEd, the ECB, the BOE, the BOJ and the stimulus measures of China, sentiment would have to shift in concluding that none of it is working and the global economy is heading for a sharp contraction in spite of the massive amount of liquidity being injected and the negative ( in real terms ) interest rate environment that now exists across many of the major industrialized nations.

I am also of the opinion that one would also need to see copper prices collapse sharply for silver to violate this downside support level. If that were to happen, that too would tell us the market now believes that all such stimulus measures by the Central Banks is fruitless and doomed to fail.

While no one can predict the future, especially with the entire global economy in a place that none of us have ever witnessed in our lifetime in regards to the sheer magnitude of the debt overhanging it, I suspect that these same Central Banks would waste no time in dusting off another version of the next round of QE were sentiment to deteriorate that badly. Let's face it - that is all they got!

For now it appears that the US economy and the economies around the globe are stabilizing. That does not mean that they are healthy; it merely means that central bank actions have stop the bleeding of the patient and got him stable. It is quite another thing for the patient to leap off of the table and start dancing. I do not expect that to occur at all especially without any serious structural changes being made in most of the Western industrialized nations.

Heading into the end of the year the thinning trading conditions are going to allow for some exaggerated moves due to liquidity issues. Keep that in mind if we see any sharp short covering rallies or even rallies caused by some new buying. I am looking out more to the start of the New Year to get a better sense of what to expect but as I wrote in an earlier piece this week, it would not surprise me one iota to see another YEN CARRY trade develop this coming year with commodities benefitting from another influx of hot money chasing yield in this pitifully, obscenely low interest rate environment.

If you look at the following Continuous Commodity Index chart ( CCI ), you will see that it is sharply lower today. Even LUMBER, which has been on a tear higher is moving lower today. There are very few commodities that are not in the red today. 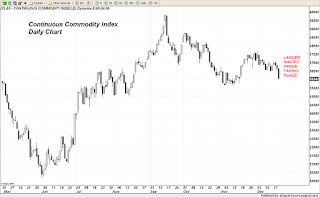 For whatever reason, hedge fund longs are dumping commodities across the board. I find that rather interesting to say the least, especially with another $1.02 TRILLION in QE coming our way next year. Some are blaming the sell off in gold and silver on the stronger-than-expeced GDP number this morning, but once you get through the headline number, you realize that the feds used a highly dubious inflation number for their "deflator". The chatter on this number was that it "was so much better than expected that it casts doubt about the longevity of the Fed's QE program". Try to stop laughing here.

Out of that 3.09% growth rate for the third quarter government expenditures were responsible for 0.75% of that number. In other words, nearly a quarter of the stated growth number is due to government spending.

Hidden deeper within the report is the fact that personal savings shrank during the quarter as did household per-capita disposable income. What this usually translates to is that consumer spending increases are not coming from rising incomes but rather from either a drawdown in their savings or from increased cash flow due to home mortgage refinancing. My guess ( and perhaps some enterprising reader can run the data to check ) is that consumers are ramping up those credit card balances once again.

Either way, the idea that the Fed is going to suddenly begin thinking seriously of drawing down its balance sheet sooner than expected based on this data is whimsical to say the least. Besides, my view of the QE programs is that it is designed FIRSTLY to keep US government borrowing costs lower and then SECONDLY to keep the big banks happy with very little daylight between item FIRST and item SECOND. If you think the US government's fiscal condition is now a mess, wait 'til you see what happens to it if interest rates start moving higher and the cost of servicing that mountain of debt comes back to bite them ( and us).

Now, if you want to hear another view as to why gold and silver are going down - hold onto yoru hat here: Traders fear that the breakdown in the "fiscal cliff" talks will result in the automatic spending cuts kicking in next year and reducing GOVERNMENT EXPENDITURES while tax rates rise thereby throwing the country into recession and reducing industrial demand for silver and putting pressure on gold in a deflationary environment.

Hmmm - back when I took logic in school I learned what I thought the real world actually believed - that two mutually incompatible things cannot both be true. "A" and "Not "A". But surprise, that is not how the financial world apparently operates. You see - economic growth is proceeding at a much faster rate that we were thinking giving us hope for a continued improvement in the US economy of such magnitude that the Fed is going to discontinue QE sooner than expected.  TRUE

The fiscal cliff talks are not proceeding well meaning we are going to get severe spending cuts meaning government expenditures will not be there to support the GDP numbers and economy meaning that the growth rate is going to slow and thus the economy will slow with it. ALSO TRUE.

Yep - there you have it. The economy is growing well; the economy is not going to grow well. If you can make any sense of this lunacy, please clue me in because I cannot wrap my pitiful brain around this no matter how hard I pretend to be a hamster on a wheel.

Let's move over to gold however. The bears had been greedily eyeing that 200 day moving average for downside sell stops. Strong physical market buying had stymied them however. Today, that buying dried up long enough to allow them to reach those stops and down she went. Volume is pretty heavy meaning a sizeable flush is occuring with a big transfer out of weak hands into strong hands taking place.

Some have questioned why Central Bank buying is not showing up. Rest assured; it is!

Here is a look at the chart around midday today. Note that 200 day moving average and how the market accelerated to the downside once that was taken out. By the way, there was a rash of put options that were bought earlier this week so someone made a lot of money in a very short period of time. 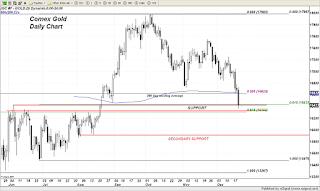 Gold has now reached the next level of chart support shown here. That comes in between 1640 - 1630, an area denoted by horizontal support drawn off early highs as well as the intersection of two different Fibonacci retracement levels. So far this region is holding the metal. If it fails for any reason, we will more than likely see gold down at $1600 - $1590 very quickly. For this market to have bottomed, we will need to see it move back above that same 200 day moving average and hold above that level. This moving average tends to attract buying or selling based on the algorithms of the funds so there will be a tendency for funds to try to sell against this level. If that selling is absorbed, one can feel very confident that the market has bottomed.  so far we are still looking to try to confirm a support level but the jury is still out on that as of now.

The HUI is providing ZERO help at this time. As you can see on its chart, there is not much in the way of chart support under this market. It might, MIGHT, be able to bounce off that former downsloping trendline that held it in check but if that fails to stem this collapse, then it is going back to 400 or even 390. 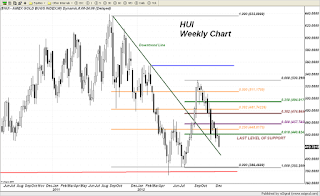