Silver tends to get harder than gold during bouts of risk aversion related selling. That was made evident today as the metal lost nearly 10% during the session. Potential buyers who had been active on dips below the $40 level and ranging down towards $39 stepped out of the way of the herdlike fund liquidation removing the buying support beneath the market that had been putting a floor there.

There are several minor bands of support between the present level and the critical $32.50 region. Whether it holds those depends on the extent of further risk aversion related selling. As long as this market holds above the $32.50 region on a weekly closing basis, it will be okay and will continue to consolidate, although within a larger range.

If it fails there, the potential for a move towards $30 becomes likely.

Bulls need to take price back above the $40 level to shake the confidence of the bears after today's rout. 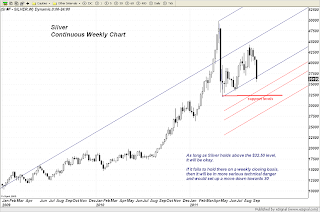 The following chart provides a picture of the technically weak posture brought on by today's hedge fund selling barage. Asian buying had been providing very good support on dips below $1800, particularly into the $1780 zone. That buying was overwhelmed today by the West jettisoning gold as the algorithms were all tripped into the sell mode on account of the rallying Dollar.

The result was to take gold through all of the support levels that had been holding it thus far. Both today's low and the 50 day moving average are the last line of technical chart support preventing a dip towards psychological support at the $1700 level. Below that, should it fail to hold, there is a former gap region near $1680 which should provide pretty solid support if this thing is going to stabilize. If not, it does have the potential to dip lower and move towards $1650.

On the upside, it needs to get back above $1800 to put a little doubt in the mind of the bears. A run through $1820 would see some sizeable short covering on their part.

It needs some help from the lagging HUI, which was slammed incredibly hard today. 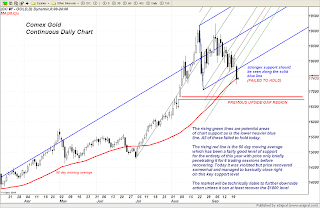 S&P 500 Closing in on a Key Technical Support Level

With the US equity markets in seeming free fall today, there are some things worth pointing out here as well.

First of all, take a look at the horizontal red and blue lines shown on the weekly chart. Look first at the lower red line. Back in August of last year, rumors began to surface that the Fed was going to embark on another round of Quantitative Easing. The reason - the first round had apparently run out of impact. Yes, it had halted the collapse in both equity and commodity prices associated with the unwind of the carry trades on the heels of the credit crisis eruption, but when it came time for it to expire, the equity markets had nothing else to drive stock prices higher and began retreating. 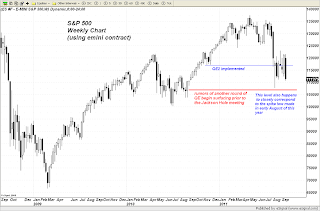 Also, economic data had begun to once again deteriorate. The result was that the stock market dropped in April 2010 and then moved sideways almost as if hanging on by a mere thread as it attempted to force the hand of the Fed for the next dose of liquidity. The Fed did oblige and that took the index on a several month long rally that peaked shy of 1400 in early May of this year as the market anticipated the ending of the QE2 program at the end of June.
Since that time, look at what the S&P has done - it has completely erased the entirety of its gains associated with the actual implementation of QE2. Another way of stating this is that the effect of the gargantuan sum of $600 billion in Treasury purchases and $300 billion for Agency Debt has been utterly wiped out. We are now back to levels commensurate with rumors of the QE2 program began surfacing.

When one considers the fact that we just witnessed a month in which ZERO new jobs were created on a net basis, you can reflect on the enormity of the wasted effort.

Perhaps that was in the mind of the Fed yesterday when they announced a sterilized Treasury purchase program of $400 billion. Either way, the markets are not at all happy.

What is more ominous however is where this market appears headed. Tomorrow's close is going to be extremely significant from a technical perspective. Note that the S&P has not yet CLOSED below 1100 on a Weekly basis. It did violate that level in early August but recovered to end the week well above this key level.

If the bulls cannot quickly muster a new effort, and we get a weekly close below 1100, it would put the index on a course for a push into the level just below 1050. Below that there is nothing on the chart until you get closer to 1000.
What I am taking away from the price action thus far is that traders right now feel no reason whatsoever to step in front of this market to buy stocks. There may be some who are calling them "cheap", and that might be true, but some are looking for them to get even cheaper before they consider buying. With nothing seemingly happening on the European front, with Chinese growth numbers a bit lower and with the Fed having fired off its gun, what else is left for the market to rally on at this point is the current line of thinking.
Let's see what we get in tomorrow's action.

Consider this as sort of an addendum to the article on the Australian Dollar earlier today.

Today's selling onslaught across the entirety of the commodity sector has wiped out the gains in this sector for the year. That is leading to further selling as hedge funds are grabbing what little might be left of their paper profits in there before those entirely disappear.

There are several factors which I think merit referencing on this weekly chart.

Firstly - the stampede to sell has taken the index below a major horizontal chart support level that came in near the 600 level. It has also brought into a focus a downtrending price channel that can now clearly be seen on the chart. Price is working slowly lower in this channel having failed to better the 660 level which is now a major point of chart resistance.

However, the longer term trend in the overall sector is still higher as can be seen from the uptrend line drawn connecting some of the reaction lows in the ongoing bull market that began back in late 2008 with the inception of the first QE program.

I am keenly interested in the point at which the lower red line of the price channel intersects with the rising blue uptrend line. That comes in near the 580 region.

In spite of the widespead selling across the commodity sector this morning, some of the major bank trading houses are still bullish on the sector overall but are cautioning their clients about the possibility of further near term declines. Some are advising clients that buying opportunities are going to present themselves but warn those potentially interested in the long side to expect more volatility. It could well be that we see some of these sidelined buyers moving back into the sector if the CCI nears this chart intersection level of 580.

This is another chart we will have to monitor for clues to future market price action as we enter the 4th quarter of this year. 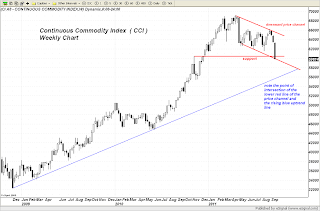 The Aussie is under severe pressure this morning as traders sell the unit on fears of the global slowdown catching up to the Land Down Under. Australia's economy has been very resilient standing out as a bright spot with relatively low levels of unemployment and a vibrant housing market. That plus the fact that it sells a tremendous amount of its goods to China, has made the Australian Dollar a standout performer for the first half of this year. It has however recently fallen on harder times as traders have shunned "risk trades" in favor of the US Dollar and the US Treasury market and a broad sell off hits the overall commodity sector.

It would appear from the price action in the Aussie that traders are concerned that eventually Australia is going to be impacted by a slowdown in global growth and that any subsequent move on the interest rate front by the RBA will be in a downward direction.

Looking at it on the price chart, it has crashed through a chart support level just below the 99 level this week and has continued its plunge this morning which is bringing it into some key technical support levels. The Aussie tends to be a pretty good harbinger of overall investor sentiment towards growth in general so if it does violate the lowest of this support levels, it will not bode well for future global growth prospects.

If you notice, back in the latter part of 2008, the Aussie bottomed and began its ascent at the same time the US equity markets and the Continuous Commodity Index both bottomed out. So too did gold. We'll keep an eye on this for further clues as to the welfare of all the above. 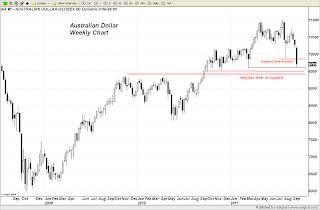 Another key indicator of overall global health is copper. This has been a very rough month for copper bulls as the red metal has also broken down technically. It looks poised for further declines with some chart support first surfacing about another 13 cents or so below the current level. We will need to see this metal stop declining if we are going to get a shift in investor sentiment back towards risk trades. 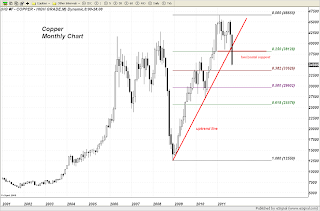