The talk today is of the subtle but significant shift in the FOMC in regards to another round of Quantitative Easing or QE. It appears the formerly hawkish dissenters from this madness have been brought in to heel with the Fed perhaps ramping up expecatations that they will act in some form as conditions worsen in Europe.

Signals are still unclear and there is a lot of conflicting information swirling in the financial air which is leading to further instability and volatility in our financial markets.

I find it less than honest that those advocating another dose of financial morphine into the system are pointing to the lack of inflation as a signal that the Fed could engage in further money creation without unduly impacting prices in general. My response to this is "Bullsh_t".

Take a look at the following charts of the two basic meat sources, cattle and hogs. The first is of April 2012 cattle. Look at what has happened to the price of cattle. While this is obviously terrific news for cattle ranchers, it is a signficant foreteller of what is going to happen to the price of beef next year. As a matter of fact it has already happened with wholesale beef prices rising to very lofty levels.

The latter is of April 2012 Lean Hogs. That is a reflection of where pork prices are headed next year.

Can anyone with an unbiased mind look at either of these charts and tell me that the markets are not expecting meat prices to rise next year?

Some may suggest that consumers will not feel the impact because they could switch to chicken. A substitution is no doubt realistic but the problem is that the rising price of both beef and pork will lead to increasing demand for chicken which will pull it higher as well (and this does not take into account any fall off in broiler production due to the previous impact of rising feed prices). 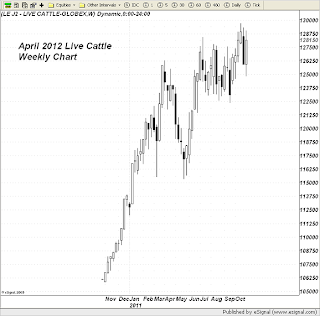 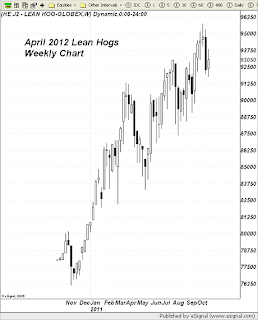 Let me attempt to explain some of this and its connection to the Fed's QE. One of the major fallouts from this ill-conceived attempt at money creation was soaring food and energy prices. QE1 put a floor in the Corn market back in late 2008 taking it from near $3.00/bushel to $4.50 before it established a price range. Later in 2010, as talk surfaced in September about the Jackson Hole Summit that another round of QE was coming, corn prices began moving higher alongside the entirety of the commodity complex. When the actual implementation of the program began, corn shot up to $8.00 bushel. 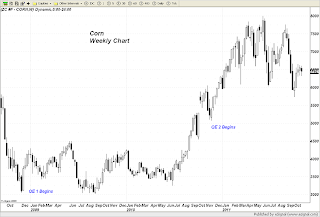 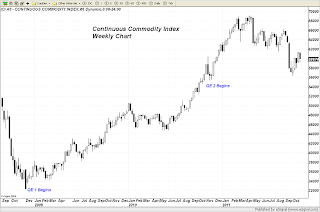 Another way of stating this is that the primary feed grain for both cattle and hogs experienced an increase of 167% in a two and one half year period. Now I will admit that the entire price rise was not directly due to both QE's as there were weather factors, etc., that came into play as well, but it is undeniable that easy money policies of the Fed were a major contributing factor to the overall price rise in the feed grains.
Why is this important? The answer is because hog and cattle producers have to make decisions whether or not to increase the size of their herds by breeding either their heifers or sows. When they sit down and put a pencil to it, they look at the cost of their feed and the expected selling cost of the animals they are going to raise which will be ready further down the road (it obviously takes time for gestation and growth to slaughter weights).
Many cattle and hog producers were initially experiencing substantial losses on each head of cattle or hog that they were raising and bringing to market because of the sharp rise in their costs so they did what a rational person could be expected to do under such circumstances - they cut back production. The result is that the overall supply of both cattle and hogs has now fallen to levels that are not keeping up with demand and that is causing prices to rise and rise rapidly. (a side note is the severe drought we had this year in the Plains which led to substantial cattle losses further crimping supply).
The other factor is that the QE programs effectively undercut the value of the US Dollar making the beef and pork produced here in the US very cheap on the world export markets when compared to competitor nations. That has sent foreign buyers to the US to source both beef and pork further exacerbating the supply/demand imbalance and pushing prices yet higher. 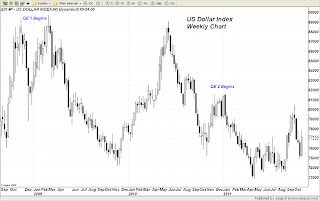 In summary - the Fed created QE1 and QE2 and in the process helped to shove feed prices higher. That sent the WRONG signal to cattle and hog producers who then cut back their herds or did not actively seek to increase their size. This occured at the same time that the US Dollar was falling and creating a type of fire sale on US produced beef and pork which led to a surge in export-related demand. The result - US consumers are the ones who will feel the impact of this in the form of higher protein prices in the upcoming year. While I am happy for my friends in the cattle and hog business who work long and hard hours, I am extremely displeased to sit here and watch my protein sources move inexorably higher realizing that some of these cost increases did not have to occur but were rather man-made.

And this my friend is how the Federal Reserve and its money creation programs impacts every segment of society even down to the most basic needs of food. Remember this when you hear more chatter about further QE coming. By the time they finish with us, a porkchop will be $9.99/pound. But what will that matter - the stock market will be moving higher so everyone will feel wealthy and will not mind paying up, will they?
Posted by Trader Dan at 11:33 AM 27 comments: