Platinum regains its premium to Gold

For the last six months or so, platinum has been trading at a discount to gold. This is a rare occurrence as one can see from a glance at the monthly chart going back to 1990. Only in 1991 did platinum trade at a discount to the price of gold. Late last year and early into this year, an ounce of the white metal was over $200 cheaper than an ounce of gold! 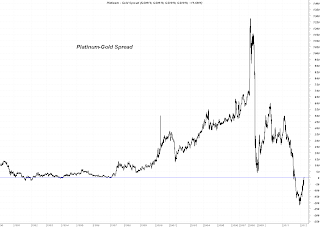 This came about due to fears that the global economy would slow down as European sovereign debt woes sent out a type of contagion rippling across the planet. Auto sales especially would be hit and since platinum is heavily used in catalytic converters, ideas spread that demand for the metal would falter.

If you notice however, platinum has been steadily gaining ground against gold as investors began anticipating Central Bank liquidity injections to deal with the pesky debt issues plaguing Europe, not to mention an ultra low interest rate environment which was intended to spur both borrowing and lending and by consequence, growth.

It also did not hurt that a major strike in an important platinum mine popped up cutting off supply from the world market.

This is another one of those combination indicators that can be used to gauge investor sentiment towards the global economy in general. As long as traders feel that there is little to fear as impediements to growth, they will bid this spread higher in favor of platinum.
Posted by Trader Dan at 6:22 PM 6 comments:

I like to term the VIX or the CBOE Volatility Index, the Complacency Index, because it is an excellent gauge of whether or not traders are complacent or fearful. The higher the reading, the more fearful or worried they have become. The lower this index reads, the more complacent or careless they generally are.

One has to go back a period of 45 MONTHS (June 2007) to find investor psychology at these levels of complacency in regards to the broad stock market as indicated by the S&P 500. I should point out that this was one year prior to the credit meltdown of the summer of 2008. It would currently seem that hardly anyone on the planet is the least bit concerned about the level of the US equity markets due to the enormous amounts of Central Bank supplied liquidity. 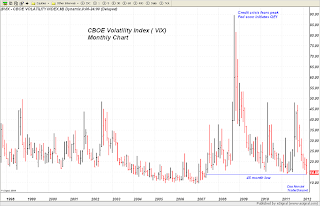 I intend to keep posting this index at regular periods to keep an eye on this as I believe investors are growing very careless in regards to the potential for an apple cart upsetting event.

Something about this just does not "feel" right to me. While one cannot argue with the tape, or in this case, the charts, the fact that all of the woes tied to the enormous amounts of indebtedness in the West have essentially been papered over, is extremely disconcerting.
Posted by Trader Dan at 3:10 PM 4 comments:

Gold crashes through support at $1680

With the mass exodus out of safe haven trades today and into stocks, gold is being sold off with the idea of taking those funds and plowing them into the equity markets to catch the rising tide.

The result of this long liquidation has been a breach of a very important downside support level near $1680 on the charts. The market is holding within the support zone noted that extends down past this level but it will be critical to the metal to hold today's low and last week's low if it is to prevent a further bout of long liquidation that could very quickly take it down to $1620 or even lower. 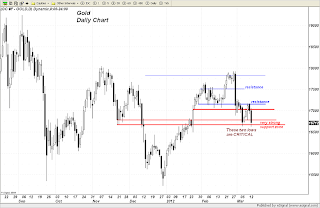 Keep in mind that the short term oriented traders are now looking at getting long the broader equity markets, particularly tech, and are thus reducing exposure to gold. It is going to be a challenge for the metal to maintain its footing as long as the "GET LONG EQUITIES" mentality is in vogue.

The Dollar is a bit higher today but that is not the main driver for gold in this session; rather it is the theme of getting long equities that is dominating. The Fed has been successful, FINALLY, in herding the hedge funds and other large institutions into equities and they are going to ride this bull as long as they possibly can. Those fearing contagion effects from European Sovereign Debt woes have been overrun by the sheer amounts of liquidity being provided.

As it stands now, even the massive build in overall US indebtedness is no where remotely near the forefront of traders' minds. 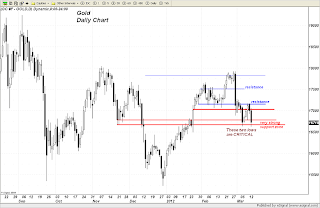 Last week I posted a chart of the S&P 500 wondering if a top was in this market. Apparently not, said the bulls, who have proceeded to take this market higher for the last 5 days in a row. Today they took the price to a new 52 week high. Isn't it amazing what a "bit" of Central Bank supplied liquidity can get ya?

Unfortunately for the Fed, bond traders are not being particularly cooperative today as they are slamming the long bond lower, particularly as they digest the day's FOMC statement which repeated, once again, the committee's intent on keeping short term rates extremely low until late in 2014!

Money is thus fleeing out of the longer term Treasury market and plowing into stocks as investors are all gleefully leaping onto the equity bull train before it leaves the station without them. With extremely low yields as far as the eye can see and the Central Banks papering over all that ails the global economy, traders are being herded into stocks, which is exactly where the monetary authorities want them to be!

Money has also been flowing out of the gold market today as safe haven trades involving gold are being taken off as well. Apparently the theme today is "GO FOR THE GROWTH". Copper is certainly acting as if traders are convinced the global economy is back on its feet and blue skies lie ahead.

The bond breakdown is extremely significant in my opinion. A while ago I posted a MONTHLY CHART of the LONG BOND detailing some technical action. I am reposting that same chart with the current action now charted. Whether the monetary authorities like it or not, long term interest rates have begun rising. If they close the week out below the technical support levels noted, momentum players will begin taking on short positions in an attempt to drive the bonds even lower. There are an awful lot of players on the LONG SIDE of the bond market who have been counting on the Fed to put a floor in this market. It is going to be one nifty trick for the monetary masters to keep the equities soaring higher and preventing the bonds from falling apart. 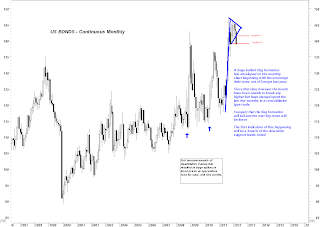 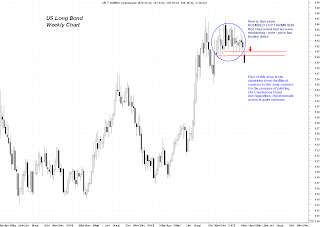 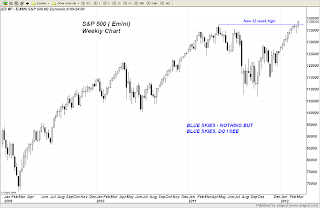 One last chart - yes, you did just dream that the US underwent a credit crisis - relax - everything that led to that has been fixed! 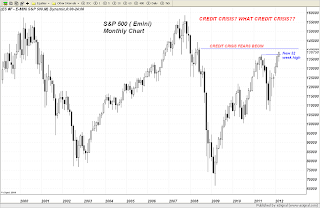