ECB President Draghi apparently has developed a severe case of loose lips as he cannot seemingly keep his mouth from issuing words into the atmosphere fast enough of late. The man has decided to initiate a round of verbal intervention directed at his stinking currency and as a collateral note, the global equity markets.

Yesterday it was: "we will save the Euro at all costs". Today it is "let's propose another round of bond buying and lower interest rates".

Just like that, it was music to the ears of the hedge fund community which wasted no time dutifully responding like the obedient lemmings that they are, jamming the S&P 500 higher, jamming nearly every single commodity market higher, and dumping the Dollar whilst simultaneously falling in love with the rotten Euro. Voila''!  Problem solved - all is right with the world once again as the candy store will now be open.

A point of interest in all this Central Bank madness - the extremely commodity sector-sensitive Australian Dollar has been staging quite a rally on the back of all this bond buying hype. Based on what I am seeing occur in these markets, the hedge funds are now repositioning on the long side of the commodity sector in glorious anticipation of the now "no way it is not going to happen" round of QE that is coming practically tomorrow as far as they are concerned. With this much anticipation, if the Fed disappoints, heaven help us all for these brain-dead funds will annihilate the commodity sector as they all rush to the exits simultaneously.

One has to wonder if a great deal of this has now become captive to the US political election season with Bernanke doing what he can do to keep his boss in office.

As I have stated many times already, we are now witnessing a metamorphosis of the US financial system from one which takes its signals from fundamentals and supply/demand factors to one which is nothing but a product of Central Bank activity or inactivity. The entire house of cards is being held together by liquidity infusions - if the market doesn't get its fix, it promptly sells off until it so unnerves its masters, that they have no choice but to feed the habit for fear of a huge withdrawal symptom manifesting itself.

That brings us to gold upon which none of this madness is being lost. The yellow metal has been behaving quite strongly on the charts this week ever since the first solid hint of an upcoming QE hit the wires. Note that while it has continued within the consolidation range on the chart that I have noted as "NEWEST CONGESTION ZONE", the lows over the last couple of weeks have been occuring at a slightly higher level. In other words, the buyers are coming in sooner instead of waiting for price to drop back to the bottom of the range. They seem actually more worried that they are NOT GOING TO BE ABLE TO BUY THE METAL LOWER and as a result are stepping up to the plate sooner rather than later. 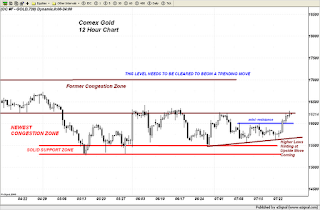 This has put a bit of an uptrend on the chart over the last two weeks and while the metal is still not decisively through the top of the range, it is sure as heck looking like it is only a matter of time before it does so. A push through the $1640 level that maintains that height on any subsequent retreat in price, will then set it up for a push through $1650 and a test of $1665 and then $1680. If the Fed does indeed launch another round of QE, so too will gold launch. If they fail to act, the metal will drift lower again to see if it can keep its important handle of "16" in front  of the price.

It is no coincidence that the gold price is moving higher when one looks at the weekly chart of the US DOllar, which has put in a massive outside reversal signal. This is what will happen to the Dollar, particularly with all those hedge funds positioned on the long side, if the QE comes. It will be obliterated. 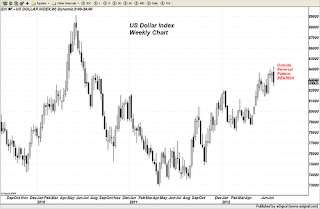 A brief note on silver - Silver actually was struggling today until the news hit the wire that Draghi was going to propose another round of bond buying and lower interest rates. That was enough to rattle the shorts who promptly raced to the exits and push it back off the lows and closer to solid resistance near the $28 level. If it can clear this level next week, it should move to $29 relatively easily.

With the grain markets the center of the commodity universe this year on account of the fierce drought that has gripped the midWest for what now seems like an eternity, commodity firms have been reaping a bonanza pushing the "buy those grains" theme for new speculators.

What has happened however is that corn prices have reached a point where the market is doing what it is supposed to be doing, namely shutting off demand.

First we learned that Smithfield, the nations' largest pork producer, began importing corn from Brazil. Even with the shipping costs to the EAst Coast, South American corn was still cheaper than US corn at the Gulf.

Now we learn today that Pilgrim's Pride, the world's second largest chicken producer, is working on an agreement to also import corn from Brazil.

While this does not signal an end to the bull run, it is a third warning shot across the bow, the first being shrinking ethanol margins, the second being Smithfield.

By the way, for those of you who might have missed it, check out my written interview with Eric King of King World News on the action in the gold market yesterday.