The following chart of the Volatility Index or the VIX as it is more commonly referred to is stunning. With today's further decline, the index has now reached levels last seen in APRIL 2007!
﻿﻿﻿﻿﻿ 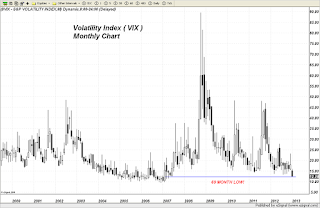 What we are basically seeing with today's move is investor complacency is at EXACTLY the same level SIX MONTHS BEFORE THE BOTTOM FELL OUT OF THE US EQUITY MARKETS in late 2007. I remind you that at that time, hardly a bear could be found anywhere with the exception of a few sharp traders/investors, managers who were warning of extreme overvaluations.
﻿﻿﻿﻿
What is even more interesting (or frightening) is that the S&P 500 was sitting at the EXACT SAME LEVEL back in that month of April 2007 as it is this month, January 2013! Take a look and see. 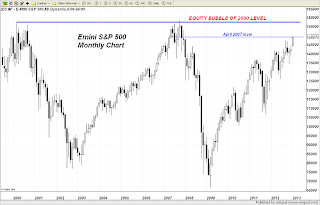 Want some more mind-numbing news? The S&P 500 is  NOW LESS THAN 100 points off its all time high and 85 points off its peak level during what everyone now agrees was a MASSIVE BUBBLE in equities in the year 2000.

I must say that based on the current economic conditions, or even expected economic conditions some 6 months out, I find it hard to believe that the current level of the US equity market are rational. That they are sitting at these levels is a testimony to the ability of the US Federal Reserve, the ECB, the BOE and the BOJ to stuff massive and gargantuan amounts of liquidity into the system in order to stave off deflation. Oh yes, they have managed to stave off deflation pressures alright, at least for the time being. What they have done is to create another massive bubble in the equity markets once again. I cannot think of a better poster child to demonstrate the degree to which paper assets can be inflated by meddling Central Bankers than the US equity markets.

With bullish sentiment once again at extreme levels, not many bears around, with an economy that continues to crawl along in an "L" shaped recovery, and with no end in sight to the massive US federal budget deficits and overall federal debt, I personally believe that the US equity markets are now a huge accident waiting to happen.

Maybe I will be proven wrong for another few months as the economy/market run on these drugs in its system, but I will not be the least bit surprised to see a significant fall in stocks when it does occur. Methinks we are all going to have ringside seats to the greatest experiment in monetary history determining whether or not endless creation of nearly unlimited sums of paper currency can usher in an era of lasting prosperity and effectively do away with any fallout whatsoever from the accumulating of massive indebtedness.

One last thing - by the end of the current administration's term, the projected US federal deficit is expected to be in the vicinity of $20 TRILLION. Chew on that for a while and you will see why this market scares the hell out of me, especially with the vast majority of investors utterly complacent with hardly a care in the world.

I hope that I, along with you my readers all live long enough to see how monetary historians are going to record this. I suspect they will marvel at the blind folly of so many. It is almost as if an entire generation of investors have lost their collective minds.

REmember, as traders, we cannot fight the tape and expect to make money but that does not mean that we cannot marvel at the rank ignorance of our era.

Gold seems to have run into extremely HEAVY selling pressure at the 50 day moving average, which incidentally, just so happens to be coming in just below the $1700 level. It appears a concerted effort is being made to prevent gold from acquiring a "17" HANDLE, which is what the momentum based buyers are waiting for.

If you look at the chart closely, you can see the defensive fortification being erected by the bears. So far the market refuses to break down but it is stalling out a bit here and will need to quickly push past $1700 soon or we will see some short-term oriented day trader types start looking for the exits.

Notice that I am including the RSI indicator merely to show that it too is stuck below the 60 level, indicating the continuation of a consolidative (sideways) type of trading pattern in the metal. Until we get a clean break of 60 on this indicator, and preferably a run past 65, the pattern is sideways within a defined range of $1695 - $1700 on the top and $1665 or so on the bottom. 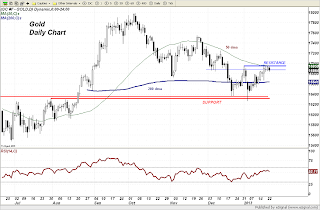