Following is a chart of the long bond laid out for you to examine.

About two weeks ago, the bonds experienced a significant price move from a technical perspective as they brokedown out of a nearly 7 week long consolidation pattern. That move signified a shift in trader psychology towards an inflationary bias and away from deflation that signified deflation as a viable theme was dead for the time being.

Since that time the bonds have managed to rally right back up into the level which had held all downside reactions in price over that 7 week period mentioned above.

From examining the chart one can see that they have reached a point at which a great deal of indecision or uncertainty in regards to pushing them back any higher has now returned.

Today the FOMC released the minutes of its Jan 25-26 meeting last month in which they expressed more optimism for the prospects of growth in the US economy moving forward this year while at the same time noting that job growth was anemic. The majority were looking at a period of at least 5 - 6 years before the number of jobs being created would be back at levels more commensurate with long term data from the US. A minority were talking a window past 6 years.

The point in this is that the Fed is trying to have its cake and eat it too. On the one hand they are eager, nay, almost begging for the markets to praise them for the apparent success of their policies. As you know those policies have been much maligned by an increasingly larger number of pundits who are looking at the longer term inflationary impact of the same. They are eager to point out the increase in growth as proof of their wisdom in moving down this unconventional path. However, they are also trying to tamp down expectations for job growth.

I get the distinct impression that the FOMC governors are attempting to send mixed signals to the market specifically to keep the rates on the long end of the yield curve from moving higher. In other words, they want to keep up the happy talk to gin up the stock market but not to the point where they cause another implosion in the bond market. They want a stock market that moves higher at the same time that the bond market is hesitant to push lower.

At some point the bond market will catch on to this game and will look past the rhetoric at solid data which is suggesting that more and more the Central Banks are way behind the curve when it comes to dealing with the inflation beast that has been loosed upon mankind.

We have seen in the last few days reports out of China, the UK and Japan detailing their problems with this beast. Can it really be expected that the mother of all liquidity creators, the Federal Reserve, has not given rise to the same here in the US?

Perseus will need more than the head of Medusa to kill this Kraken.  Once the velocity of money increases, the Kraken will make its appearance here in an undeniable fashion.This is what the bond market is focusing on. Traders see it and know it is coming. So does the Fed but they are attempting to keep the QE policy front and center on traders' minds so as to prevent them from unloading too heavily on the long end of the market. I do not think it is going to work.

If I am correct, bond traders will use all rallies in bonds as an opportunity to sell. If that is the case, the chart will soon reflect that. 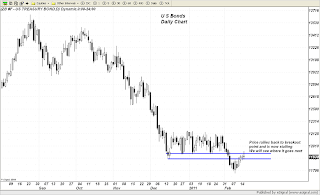 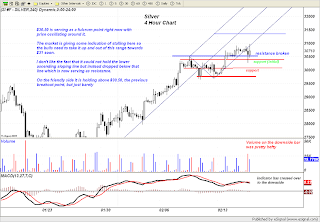 A development complicating matters over in the volatile Mid East spurred additional safe haven buying in gold, dragging up silver in the process in today’s session. is planning on sending two warships through the on their way to the via the . Needless to say, it adds yet another piece of uncertainty in a puzzle that is getting quite mixed up. There are also reports that now is dealing with some population unrest.
Crude oil, both TI and rent moved higher on the news with rent of course leading the charge. ith fear comes gold buying as well and the buying was enough to take it into plus territory and up into resistance at $1380. It did fade however coming into the close which is a bit disappointing. A strong chart close today would have set it up for a run back towards $1400. As it stands now, the price action is registering some uncertainty or hesitation on the part of the bulls.
Gold will be keening watching the Mid East overnight for any news.
Open interest registered a sharp increase in yesterday’s run through resistance by gold. Specs came back in a big way adding a bit over 8,000 contracts in what has to be viewed as healthy for the market. For gold to punch through $1380, we are going to need another comparable surge in open interest.
Silver ran right into resistance just shy of $31 once again. For the time being that level is serving as overhead chart resistance. Once that gives way, the high near $31.25 will fall. Same thing as gold - the fade from the session's best levels is disappointing and is registering as indecision on the price chart. Downside support lies first at $30.50 on any setbacks followed by another level just above $30. If silver is going to mount another sharp leg upward, it must hold $30 on any downside test.
The HUI is maintaining its hold above 540 although it is a bit tenuous here. I would like to see it put a little more space between itself and this level especially to end this week. It has pushed past the 50 day moving average which is bullish but I think more potential longs on the sideline are waiting for it to convince them a bit further before coming back in. If the broader equities shrug off the pressure that came from the Iranian warship news, the HUI should move higher and give us that space we are looking for.
onds were all over the board today – first moving lower on some friendly economic news before moving up nearly half a point on the Iranian warship news. They then gave those gains back and moved towards unchanged on the day. It seems as every single market on the planet is being swamped with wild volatility. 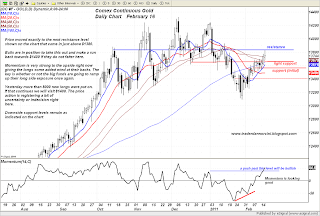 Giving further credibility to growing suspicions that Fed Chairman Ben "there ain't no stinkin' inflation" Bernanke lives in a cocoon and has been able to somehow miraculously suspend his body's need for actual food, we get the news today that the Producer Price Index, which measures prices at the wholesale level, climbed to its highest level in more than two years.

Posted by Trader Dan at 9:43 AM No comments:

This story has the markets very nervous this morning...

http://www.foxnews.com/world/2011/02/16/israel-warns-act-iranian-warships-passing-suez-canal/
Posted by Trader Dan at 9:14 AM No comments:

Could Gasoline be getting ready to join the commodity parade

I have been watching the continuing pressure on WTI crude which has taken it down towards the $84 level all the while as Brent Crude has managed to hold relatively firmly above the $100 level. One would be tempted to think that gasoline prices would be suffering the same fate as WTI but that has not been the case. It has been moving steadily higher as WTI has been moving steadily lower and has been grinding higher over that same period.

It is now within a whisker of staging an upside breakout on the charts. If it can clear what has been decent overhead resistance near $2.55, it should commence another leg higher in its near uninterrupted run since August of last year.

The implications for consumers are obvious as most of you have probably already noticed every time you pull into a gasoline station to fill up your tanks. It certainly would not hinder gold from moving higher! 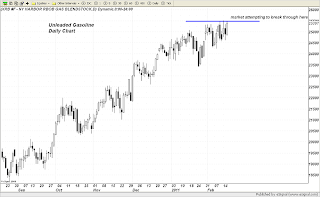 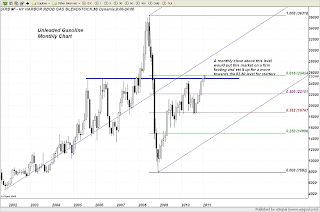