Gold attracted relatively good buying today as it appeared SAFE HAVEN buying was back in vogue (at least for today). Chatter that I am picking up is that more investors/traders are growing concerned that we have dodged one fiscal cliff bullet only to have to face a ricochet sooner rather than later and deal with the whole problem all over again.

That led to weakness in stocks (along with the idea that earnings are going to disappoint as the numbers begin coming out) and instead saw money flow back into bonds, the safe haven currencies ( the Yen and the US Dollar) and into gold.

As stated yesterday, value based buying can provide a floor of support for a market and can bottom it but it takes more than that to actually propel a market higher into a strong sustained uptrend. That requires momentum based buying and so far that is lacking. When I wrote yesterday that gold was needing a catalyst to get it moving higher, my meaning was a TECHNICAL CHART catalyst to bring in hedge fund money on the buy side.

Right now, hedge funds are still liquidating longs or even adding to the short side to play gold. To get their friendly attention, gold will need to take out the resistance level noted on the chart and get at least TWO CONSECUTIVE CLOSES above that level or ONE SOLID CLOSE ABOVE the $1700 level that can then remain above $1680 on any subsequent price dip. 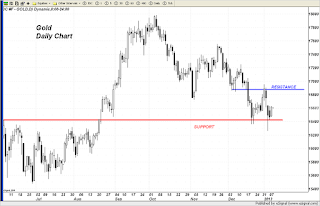 Between index fund rebalancing, confusion over the various conflicting statements coming out of the FEd governors and uncertainty regarding the health of any so-called global recovery, markets have been giving off some rather conflicting signals. I am hopeful that once we at least get through the index rebalancing we will get a clearer picture of what the markets in general want to do and gold in particular.

The HUI did manage to recover the broken support level of 420 by the time the trading session was closed but so far the shares are not providing any sort of lift to the sector at all.
Posted by Trader Dan at 3:13 PM 6 comments: