Both silver and gold are moving higher today as they add to gains made in yesterday's session, gains which I might add, tremendously improved the technical chart picture for silver.

See the chart posted yesterday evening in reference to silver but note also the following chart detailing the strong move higher in the Continuous Commodity Index.

It is closing in on its 50 day moving average which closely corresponds to the level near 565, the line marked, "initial resistance" on the chart. 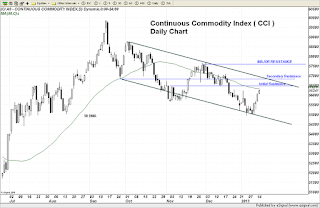 As you can see, since September of last year the entire commodity complex as a whole, has been trapped within a defined downtrending channel. This is important to note because it has enabled the idea that the Fed's easy money policy are not proving to be inflationary, to gain credence. After all, if wholesale prices of basic commodities are trending lower, it is difficult to make the case that an inflationary episode lies just around the corner.


This latest move higher in the index must therefore be closely monitored as any change in the technical posture of this chart, will be the first sign of inflationary pressures beginning to surface in the economy at large. If, and this is a big, ""IF", the index pushes past BOTH resistance levels noted on the chart and breaks out of the channel, especially if it clears the region near 578, expect to hear increased chatter about inflation. This should especially benefit silver, which is much more sensitive to inflation pressures than is gold, or least has been if recent past is any indication.

Quite frankly, I have been a bit surprised that it has taken so long for the sector to see much in the way of money flows, especially with the equity market moving so strongly higher on the thesis that the global economy is recovering. If it is, especially in the case of China, then commodities as a whole would also benefit under such a scenario. Throw in the fact that a Yen Carry Trade, or even a Dollar Carry Trade, could easily be used by aggressive hedge funds to leverage themselves up to the gills once again to try to take advantage of the ultra low borrowing rates to fund such a carry trade, and the ingredients for a rally in this sector should seemingly be coming into vogue.


Moving back to the silver chart, it pushed through the 200 day moving average in yesterday's trade but instead of falling back below that level, it has added to gains and is now threatening a  breach of what has been tough overhead resistance near the $31.50 level. If it takes that out, it will make a try at the downtrending 50 day moving average just shy of the $32 level. 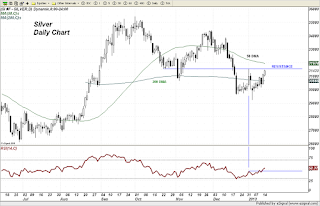 The RSI looks good as it has pushed through the peak made in that indicator coinciding with the first push to $31.50 at the beginning of this year.

Incidentally, the Platinum group metals are both putting in strong performances today; this is helping silver as it tends to feed into an impulse to buy industrial metals.

Gold is strong today as it works towards its overhead resistance first near $1685 but more specifically near the $1696 level. That level also happens to be where the falling 50 day moving average comes in. Expect some opposition to the metal if it makes it to that point.

Gold needs to put a handle of "17" on itself if it wants to get any excitement going in terms of sparking some short covering and more momentum oriented buying. If it does, all of those fresh hedge fund short positions that were added below $1650 over the last two weeks will be in serious trouble. 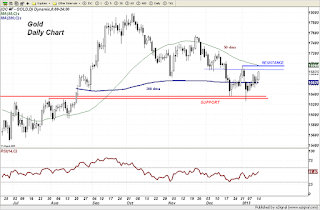