The Industrial Metals Trade vs The Safe Haven Metal Trade

One of the by products of the surging crude oil price has been to create a bid underneath the precious metals markets of gold and silver and to put a damper on expectations of future growth in the overall global economy.

Copper, a base metal, and one which thrives when the economy is improving or growing, has been the beneficiary of the improving economy theme since late last year and had been outperforming gold as the market was becoming more convinced that the worst of the economic problems were behind us and that the entire global economy was on the mend.

The surge in crude oil prices associated with the outbreak of unrest and social instability across the Middle East has caused a dramatic reversal of that recent sentiment. The concern is now focused on how long crude oil prices will stay near current levels and whether or not there is additional upside should events there further deteriorate.

As such, players are dialing back their expectations on global growth a bit and this is leading to some reassessment in regards to copper exposure. Investors and traders are basically saying, "Why own copper which could be hit if things do indeed slow down and why not increase my exposure to gold and silver".

This shift is reflected in the charts presented below. The line indicates the spread between gold and copper. As such, it tends to give us a peek into what the hedge funds are doing with their funds. Since the beginning of February, money has been coming out of copper and into gold. The same holds true for silver which has exploded against copper although it was outperforming the red metal for the last few months of 2010.

As long as crude oil continues strong or works higher, this trade should work and will help to shore up any downside in both gold and silver. It could be a very volatile trade however should crude oil prices reverse sharply for any reason. If that were to occur, the "improving economy" sentiment would see money flow back into copper and perhaps out of gold and silver. That is not to suggest that gold or silver will top; it is merely to say that there might be some reallocation of hedge fund money back into copper and out of gold and silver. 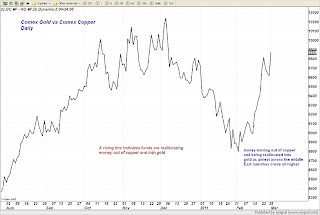 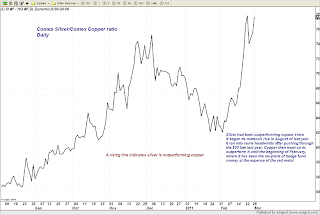 Gold went on to make a new all time high today steadily gathering strength as the trading session wore on. The catalyst was soaring crude oil prices which generated both a safe haven and an inflation bid in the metal.

There are two things to note about this:

First - the metal did this in the face of a safe haven bid going into the Dollar. That generally translates into gold rising in terms of most of the other major currencies. For example - gold priced in terms of the Japanese Yen is within striking distance of its all time high. Euro-priced gold is 23 euros shy of its all time price in that currency. That is a good sign from a trading standpoint because it indicates that the market is not moving solely on Dollar related issues but is strong based on its own merits.

Second - While the speculative money has been returning to the gold market since it hit bottom near $1310 back in January, they are still not near their peak exposure based on recent measurements. Translation - although the market has come a long way the long side, while definitely getting busy (which is what we want to see by the way), is still not all that crowded.

With the market trading well above all of the major moving averages, the speculative long crowd is in the driver's seat for the time being. It would take a plunge down below $1400 now to run a large number of them out. The market is in a posture which should engender buying on dips rather than one of selling rallies based on its current technicals. 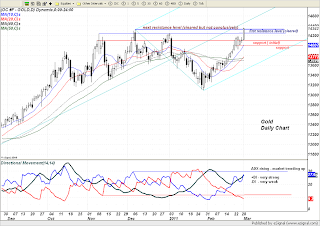 I would like to see the metal push a bit further past the old all time high and work closer to $1440 to begin accelerating as I believe that would force out some of the larger shorts who are better capitalized but do not have the depth of pockets of the pestilential bullion banks.
We should look for support to surface initially near $1410 and if that failed to attract enough buyers,  then $1400 comes into play. That would need to hold to prevent a bit deeper pullback in price, that might possibly take it down towards $1380.

Upside is now in uncharted territory once again so are making projections where resistance might be expected to surface. There looks to be some resistance near $1445 followed by $1450. If the market pushes through these levels in the next few days, quite frankly there does not appear to be all that much standing between it and a run towards $1500.
Posted by Trader Dan at 2:08 PM 2 comments: 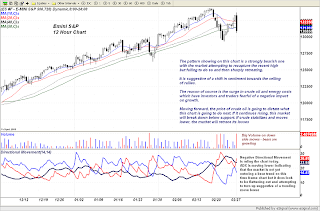 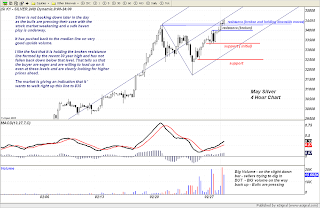 Check out the following story. I would not be overly concerned about this however since we just heard from Ben and he assures us that these price rises are only temporary and modest. Why worry? Be Happy!

HUI on the move

The HUI is putting in a strong showing today and although some issues in the sector are badly lagging, others are extremely strong and that strength is pulling the entire index higher.

The ADX is rising indicating an upside trending move is currently underway. Directional movement indicators do not yet appear to be at extreme levels suggesting this thing has further to run to the upside.

That is confirmed by the moving averages which are all rising and in a bullish trending posture. 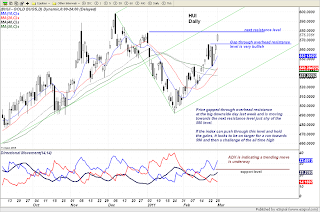 Inflation on the move in the Eurozone - Bernanke wears Blindfold

News out of Europe early this morning revealed its rate of inflation rose to a 28 month high of 2.4% in February.

Chalk up one more region of the globe where the Kraken is on the move.

If that was not bad enough, there was further confirmation of the problems that China is having containing this beast. Two separate surveys from Chinese manufacturers both revealed upward price pressures.

It is becoming evident that about the only person on the planet who is not concerned about inflation is chairman of the Federal Reserve, Ben Bernanke, who continues sailing his boat down that river in Egypt called De Nial. He had the brazen audacity, in the face of a surge in gold, silver, oil, gasoline, cotton, the CCI, etc. to assert that these rising prices will result in only a "temporary and relatively modest increase in US consumer price inflation".

I do not know about you but looking at the price charts of just about every single commodity one can look it, those charts do not show a 'relatively modest increase'. Does a 100% increase in 7 months in some food costs count as modest?

I can understand the Chairman not wanting to react to ever single tick change in price but for crying out loud, the CCI just made a brand new all time high yesterday and has been rising almost vertically since June of last year. He might want to reconsider that this rise is "temporary' or "modest". Yes, the price of some food items has eased somewhat, notably wheat, but the fact is that the overall index, is still at lofty levels no matter what standard of measurement is employed.

Unless we have a tremendous year this season for the North American crop, we are still going to be dealing with the potential for continued very high grain prices. Yes, there may not be $9.00 for wheat or $7.50 for new crop corn but even $6.00 corn or $7.00 wheat cannot be considered cheap.

Either way, the gold and silver markets are strongly disagreeing with Mr. Bernanke's rather rosy outlook on the inflation front as both markets are surging higher on an inflation trade.

Even the bonds are coming under some pressure, in the face of a falling equity market I might add, due to bond traders believing interest rates on the long end are just too low for the level of inflation that they see coming.
Posted by Trader Dan at 9:50 AM 1 comment:

Figures released by the exchange this morning show another reduction in the March silver futures contract. Total open interest in that month dropped to 2,833, down 1,417 contracts. Thus far no sign of a squeeze in that particular month. Even at that, silver is very strong on the charts.

There were a total of 42 delivery notices issued yesterday bringing the total deliveries for March to 294 or 1.47 million ounces. The biggest stopper was The Bank of Nova Scotia. Deutsche and Morgan were the biggest issuers. So far, this process seems orderly with nothing remarkable standing out just yet.

Interestingly enough, the May/July spread has tightened on today's move higher  with the May moving to a one cent premium to the July. This spread has been very volatile moving into backwardation and back into contango throughout the session. I am still keeping a close watch on the board structure of the first three months here to watch for anything significant that might indicate that the remaining shorts in the March contract might be in trouble. 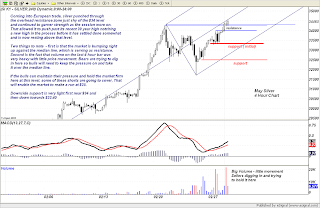 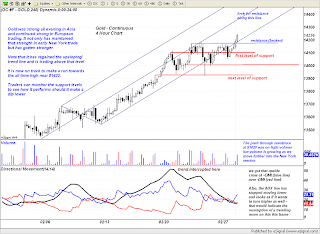