Gold gave back a goodly portion of its torrid gains from yesterday in today's session. In spite of the weaker Dollar, it was hit with a fairly good wave of selling. Noteworthy however is that it did end the pit session ABOVE the 200 day moving average after having fallen being this level at one point during the trading session.

The price action continues to reflect the uncertainty abounding in the minds of many regarding gold's future. I will not be convinced that this market is going to undergo a sustained move higher until it clears that solid blue line near $1698 and preferably until it gains a handle of "17" in front of it. While the close, particularly to end the week, was at least NOT BELOW that 200 day moving average, it is not enough to turn the technicals friendly yet. 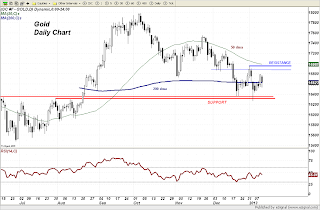 Clearly traders are selling rallies in this market as it works within a defined range trade although it is disappointing to see it unable to at least climb back above the $1690 level before moving back to the bottom side of the range. It was unable to even gain the $1680 level before the selling started.

One thing to note - the COT REPORT is telling me that there is a growing number of hedge fund short positions that were established in gold BELOW the $1650 level. Those positions are under water. The key for the bulls is to push price high enough to cause some pain to the shorts; enough to force them out. That is why it is imperative that the resistance level noted on the chart is conquered. Failure to do so will give these losing short positions a new lease on life.

Summary - more of the same boring price action in gold  but for at least this week, the bulls managed to eke out a minor victory. Whether they can build on that next week is anyone's guess right now as it seems for all practical purposes that the hot money is flowing into equities for the time being. The Commitment of Traders report indicates the loss of speculative interest in gold, and silver, for the time being. That will need to change if these markets are going to get anything sustainable to the upside.